The GOP's poisonous double-speak: Thomas Frank on how Republicans hijacked the midterms

Once again, Republicans used their patented brand of fake populism to make Democrats look like chumps 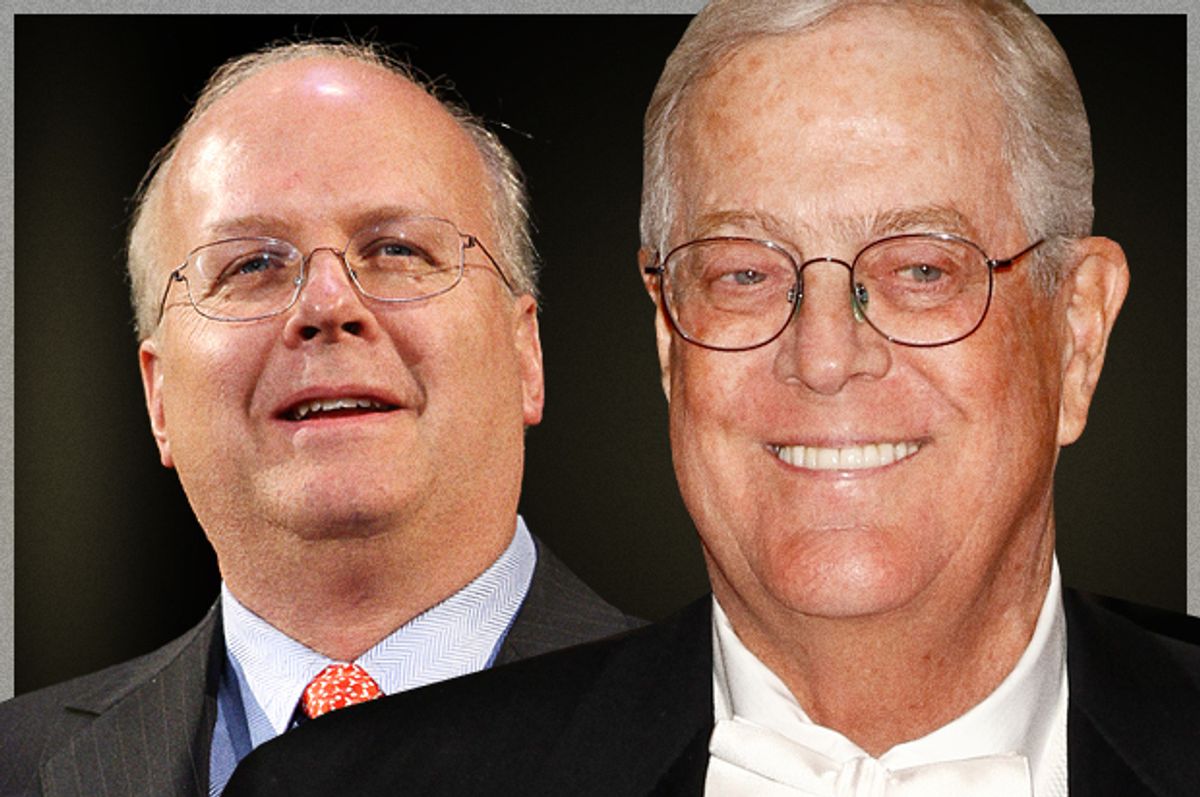 Last week, with the Republican campaign robo-calls coming one after another over the phone in suburban Kansas City — at least a dozen of them every day, the right-wing super PACs’ version of a World War I artillery barrage — I picked out one phrase from the hailstorm of words: “Washington’s liberal class.”

That phrase, delivered with sneering emphasis on the second word, may have been a key to the whole confusing affair. Consider the many ironies of the 2014 elections. Georgia, the state with the highest unemployment in the nation, just elected as its United States senator a businessman who is “proud” of his career of outsourcing. The voters of Illinois overwhelmingly approved a referendum calling for a higher minimum wage, but they also chose as their governor a Wall Street type who in the past has asserted that the minimum wage ought to be reduced or eliminated. And the public as a whole, driven to fury by the spectacle of Washington gridlock, just handed over the U. S. Senate to a party that has enshrined obstructionism as its most precious article of faith.

Low turnout is one reason for these contradictory results. Big money is a second. But a third reason voters did these futile, clashing things is that this is our fourth hard-times election in a row. Lashing out blindly and in all directions against the powerful — against low wages as well as against a comfortable “class” that is amply represented in Washington — is still our political default position, some six years after the financial crisis and the Wall Street bailout. For many Americans, the recession is still on. They know that their region hasn’t recovered ... that their household wealth isn’t coming back ... that people like them no longer have a shot at the middle-class life in which they were raised.

The point of the Tea Party movement, back in 2009 and 2010, was to attach this anger to the free-market philosophy. Tea Partyers figured out a way to oppose the bailouts even though Republicans had passed them. They mimicked the protest fashions of the 1930s even though that was a period uniquely lousy for Republicans. They screamed about what they called “the ruling class” even though their bad ideas would only empower our economic rulers. And taking the novels of Ayn Rand as inspiration, they hijacked the populist sensibility on behalf of the “job creators” — the poor, disrespected billionaires, your comrades in suffering.

In their mission of rescuing free-market orthodoxy after free-market orthodoxy had crashed the global economy, the Tea Party succeeded. They don’t hold protests in parks anymore, but their distinctive species of cultural theft persists nevertheless; it will go on until economic conditions on the ground improve or until the genuine owners of the populist tradition finally take it back from them.

There is no danger of either happening any time soon. Indeed, it is now possible for a Republican soldier like Frank Luntz to explain the Republican victory by writing, “People say Washington is broken and on the decline, that government no longer works for them — only for the rich and powerful.” You read that right: After deliberately breaking Washington, the Republican Party just rode to power by protesting Washington’s brokenness. Having done all they could to enrich the rich and empower the powerful, the GOP has now succeeded in presenting itself as America’s warrior for social justice.

Luntz isn’t the only one saying things like this. Consider the recent doings of Freedom Partners, a group aligned with the Koch brothers, whose TV commercials ran wall-to-wall in Kansas during the last week before the election. Navigate your way to their website and click upon the link reading “Cronyism in America,” and you will find a remarkable exposition of purest market populism, in which every form of government economic activity from the 2009 stimulus down to licenses issued by local governments is said to be a kind of corruption, a cruel trick played on average people by the powerful. Populism of this sort is enormously useful because it allows Freedom Partners to vituperate against rich and powerful business interests without actually threatening rich and powerful business interests.

In the election just completed, Freedom Partners Action Fund pursued its phony war against capitalism by attacking health insurance companies, which it accused of profiting massively from Obamacare and also of donating massively to Democratic candidates. The Freedom Partners injected the charge into pretty much all the contested Senate racesb—bIowa, Louisiana, Michigan, Colorado. A version of the attack tailored for  Alaska voters put it this way: “Senator Begich isn’t standing up to insurance companies; he’s standing with them.” A favorite line the Freedom Partners kept coming back to: “The hypocrisy is shocking.”

Is it ever. The Koch brothers’ pals basically swiped this whole critique of Obamacare from the populist left.

American Crossroads, one of Karl Rove’s personal agitprop units, was even worse, constantly pounding Democratic candidates with critiques that were also derived from, well, us. The group, or one of its allied super PACs, assailed Mark Begich for allegedly paying female staffers less than he pays men. It described Rep. Bruce Braley as being “on the side of billionaire special interests, not Iowa workers,” a reference to campaign donations Braley got from the wealthy environmentalist Tom Steyer. It accused Sen. Kay Hagan of cutting Medicare to pay for Obamacare and blasted her for supporting a “controversial” plan to raise the Social Security retirement age — a reference to the Bowles-Simpson Grand Bargain, which was only “controversial” because people like Paul Krugman opposed it.

Let us pass over the spectacle of Democrats so anxious to compromise with the right that the right can now pick them off from the left, and ask instead, how did the Democratic leadership faction deal with this extremely predictable eruption of the fake-populist volcano? Well, while the Republicans were modeling themselves after Tom Paine, what Democratic strategists chose to embrace was ... the principle of dynastic succession, rallying around the aristocratic children of famous politicians. Their candidates espoused a form of post-partisanship so high-minded that certain of them would not even admit they had voted for the Democratic president — a high-minded post-partisan himself — much less stand up and defend his accomplishments, such as they are. They were so confident that Big Data and demographics would bring this election home they scarcely bothered with persuasion.

Democratic leaders chose to do things this way because a certain species of Democrat always chooses to do things this way. They do it because to a surprising degree they really are, as that robo-call in Kansas suggested, a class-based party — the class in question being the professional-managerial class. There’s a reason Iowa Senate candidate Bruce Braley thought it a crushing put-down to describe a certain senator as “a farmer from Iowa who never went to law school.” It’s the same reason “working-class white men make Democrats nervous,” to quote a recent Newsweek headline. It’s also the reason an election night NPR report on the disastrous results of the Kentucky Senate contest included a snippet of commentary from a voter who dismissed the Democratic candidate as a “spoiled rich kid.”

Actually, that last one boggles the mind. Choosing Mitch McConnell on the grounds that he’s a friend of the un-rich pushes every theory about low-information voting far past the breaking point.

Still, the facts remain: Though Democrats try and try, they can’t beat the Republicans at their traditional game of pandering to the plutocrats. Nor do Democrats win any points when they soar, ever so nobly, above class-based discontent. Turns out the wily Republicans have no such scruples.

We are living in a new, oligarchic world — an endless downward spiral for the kind of voters who put FDR in the White House four times — and it’s time for the party’s leadership to notice the changed situation. Many of our modern, post-partisan Democrats are about as well adapted to the current climate of economic fury and apprehension as an alligator is to the icy waters of the Arctic. They need to evolve, and quickly.