I was a conservative coward: How the midterms evoked my past of shame, terror and Fox News

The awful midterm returns made me grapple with my dark past. It also made me realize: Fox and the right are losing 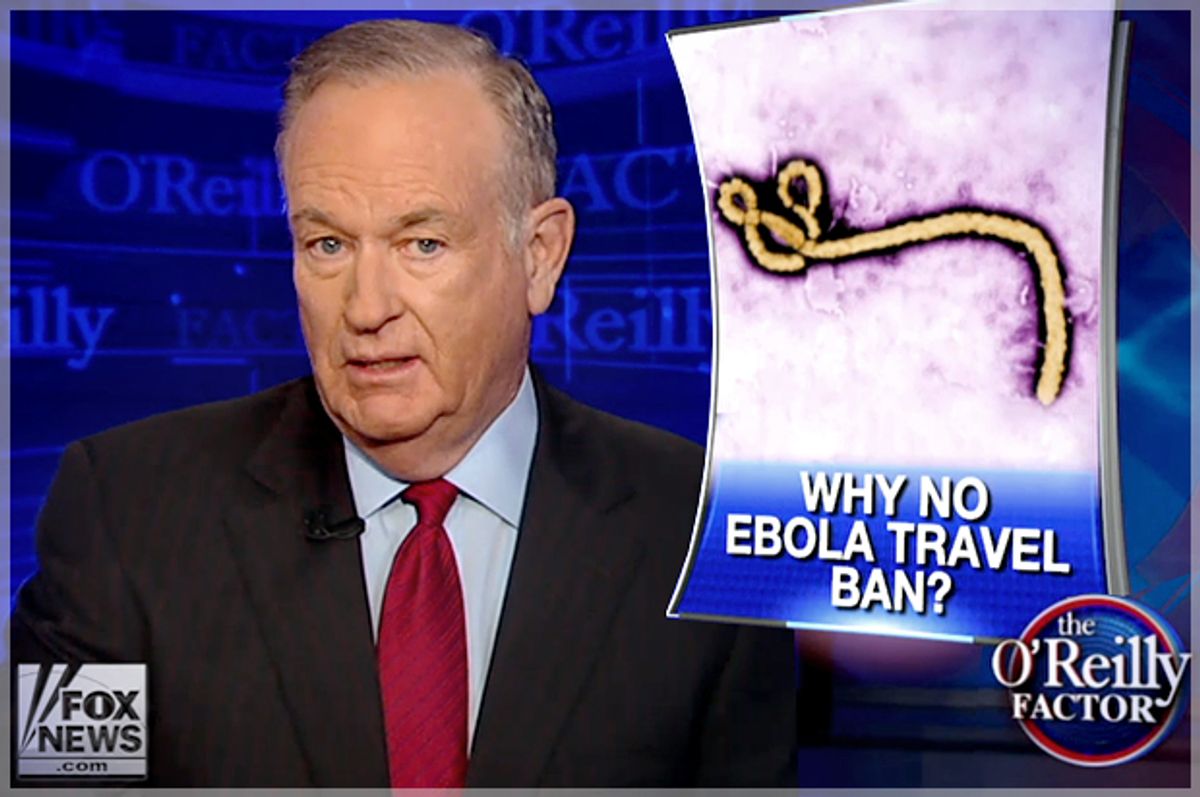 What worries you, masters you.

Observing the latest bout of irrational fear and stupidity over Ebola and the radical jihad group ISIS, I’m reminded of my own innate fear, an emotion that drove my politics and infected my life until I was almost middle-aged.  I am ashamed to confess, but I can only control the anxiety and paranoia now because I first admit it and then seek to understand it.  When I was a conservative, I fretted about people and issues from faraway places that had zero actual impact on my daily life.  The terror was both illogical and very real. The feelings were so intense that they left no room for me to consider the motivations and opinions of other people, which is the defining characteristic of modern conservative politics.

The last election demonstrates the triumph of fear over reason.  People were scared, disillusioned and confused, so they didn’t vote.  Now that the election is over, I predict that the Ebola crisis and the ISIS will crawl back into their rightful irrelevance to American’s everyday lives. We’re already seeing the coverage peter out, now that the mission of scaring people at the polls has been accomplished.

There is one political party most dedicated to creating and exploiting irrational fear in Americans.  Sure, the left does it too (and they should not), but only the conservative ideology is defined by it. They have their own marketing arms in Fox News and talk radio that dish out a daily dose of abject terror expressly to drive emotional people to vote against their own interests.   The first two casualties of fear are always perspective and reason.

Let’s look at these latest two issues with just the smallest amount of logic.  Ebola is a serious health issue, sure, but numbers show how little it impacts America.  There has only been one death and a handful of cases in this country.  For perspective: 87 Americans on an “average day” are killed by gun violence and more than 30,000 a year are killed in car accidents.  I’d like to say conservative media has been the only culprit, but you can’t flip on a station without a dose of needless fear-mongering.  It’s a strong statement, but I would argue this is the worst display of journalistic malpractice since the flawed run-up to the second Iraq War.  ISIS is another issue frightening Americans, yet no one inside America has been killed by this primitive band of outlaws.  In this country, you have a better chance of dying from a slip in the tub than being killed by a terrorist. ISIS is a serious foreign policy challenge, but they don’t have a navy, air force or even a rowboat with which they could reach the U.S.  The obsession over these issues is childish and stupid, yet they are driving America’s political conversation at the expense of real challenges and problems.

Just a couple of weeks ago, I sat in a professional seminar about the “emotions we bring to work” every day.  The speaker, Chris Olex, started with a discussion of the four “basic” emotions: happy, sad, angry and afraid, but fear was the runaway star of the show.  Olex spent almost the entire session trying to get the attendees to understand how fear drives our most primitive and unreasonable reactions.  She spent a great deal of time explaining the “amygdala,” the part of the brain responsible for our basic survival.

Often called “reptilian,” the amygdala houses our fear and anger, also known as the basic two planks of the Republican Party platform.  It creates in some people an animalistic fear of the ill-defined “other” who is out to take your job, collect unearned government benefits or have kinky sex with your daughter.  It’s a classic amygdala play.

It’s easy to understand the fear, because it’s hard to think rationally when so many people are telling us to panic.  Chicken Little has nothing if not conviction.  When I was a conservative, there was a parade of “media sources” that were more than happy to confirm my worst fears and suspicions on every subject.  One of the most common phrases on talk radio today is some derivation of, “I think that's right!”  Listen to it and count up the agreements, no matter how trivial or outlandish. Everyone always agrees.  It’s an exercise in existential confirmation bias.

You’ve heard the names, Hannity, Ingraham, Savage and countless others, all dripping with fear and outrage so unwarranted it’s indistinguishable from parody.  The big daddy of them all is Fox News poster boy Bill O’Reilly.  O’Reilly has been at the fore of the most recent and unreasonable terror.  His alarmist, mob rhetoric over ISIS and Ebola makes the people who consume it less informed.  I doubt he believes his own irrationality, but if he really buys his own nonsense, he must be the most frightened man-child on basic cable.

The way O’Reilly brings people along in his paranoid fantasies is both amazing and depressing.  For instance, a couple of weeks ago he floated the idea of creating an army of “mercenaries” to take on ISIS.  Every guest he interviewed about the idea scoffed.  He could not even seem to find his normal parade of sycophants to tell him his nuttiness was brilliant.  Undeterred, O’Reilly created a poll and invited his aged and terrified audience to weigh in.  Of course, he got 70 percent agreement in his unscientific poll.  He waved around the results as if it were a tablet holding the Ten Commandments.

Although many people mocked his ISIS idea, O’Reilly often floats a nutty idea and then conducts a nonscientific Internet poll to confirm it.  It’s genius.  Just to test how it works, I created my own poll, asking “which phrase best describes Bill O’Reilly.”  I have to admit my own childishness at selecting the answers, and the suggestion that he “prefers the company of goats to human women” was by far the most popular out of more than 500 votes cast.

Lefties, by and large, don't come to universal agreement on issues. They have a tendency to discuss every issue to death.  It’s a good trait based on empathy and tolerance, but all the waffling makes it impossible for them to condemn people like O'Reilly in an effective way.  Jon Stewart, Stephen Colbert and others often take on O’Reilly, but there is always a kindness behind the criticism that is the hallmark of liberalism.  If one side is milquetoast or meek fighting another side that is hysterical and shrieking (regardless of facts), it takes no great insight to figure out who will win.  For this reason, I consider it my sacred duty to call out this constant, needless fear-mongering.  O’Reilly is exposing himself as a pants-shitting, sniveling coward.  He can’t possibly love America, because he’s too busy being terrified by nonexistent threats to offer any meaningful contribution to society.

The good news is that O’Reilly is losing, and he knows it. With every rant, scream and insult at a “liberal” on his show, he only proves the desperation of his rear guard action.  A child of the '50s, he has spent his life expecting certain communities to kowtow to him.  For O'Reilly, every small brown person, immigrant or poor person exists only to carry his bag, but now “those people” are talking back.  The social order is in upheaval.

All humans experience time in an inevitable forward march, and conservatives see the march of time as an inevitable loss.  When modern conservative hero William F. Buckley stated: “A conservative is someone who stands athwart history, yelling Stop,” he was drawing a line of failure in the sand.  When I was conservative, even before gay marriage or the Affordable Care Act, I knew that every conservative loss, no matter how tiny, was one we could never get back.  The realization that every inevitable forward step was a loss for my cause enraged me, stimulating my reptilian brain.  Even against an avalanche of one-sided wins, conservatives have to only lose one, say, the gay marriage debate, and they can never, ever move the needle backward.

I still spend too much time fighting my own worst instincts.  It’s tiring to take constant consideration of my own biases and fear, but it’s worth it.  I never fight away my anger, because it’s instructive.  I’m angry mostly at myself for being manipulated by carnie barkers masquerading as “the media.”  We are all works in progress, fighting our natural instincts of self-preservation.  That we want to live and thrive is natural, but when we let our instincts damage reason, our nation and indeed our basic humanity suffers.  I regret letting cruelty, fear and tribalism drive my choices.  I should have been better, and my remnant rage is a reminder to always think for myself in the future.

I said earlier that there are two casualties in the Fox News-based assault on reason, yet I failed to mention a third: democracy.  We’ve just witnessed the result of an election fueled by negativity and disinformation, and people are afraid.  They fear ISIS, Ebola and the boogeymen that inhabit the prehistoric recesses of the reptilian brain.  These fears are overblown, to say the least, but we are being intentionally manipulated by conservative voices that thrive on fear to win elections or ratings.  To their enduring shame, they have no concern for the damage they do to institutions and people when playing to the worst instincts of humanity.