"The same old leadership": How Hillary Clinton's progressive rivals will try to dislodge the front-runner

Martin O'Malley, Jim Webb and Bernie Sanders gear up for a tough 2016 battle 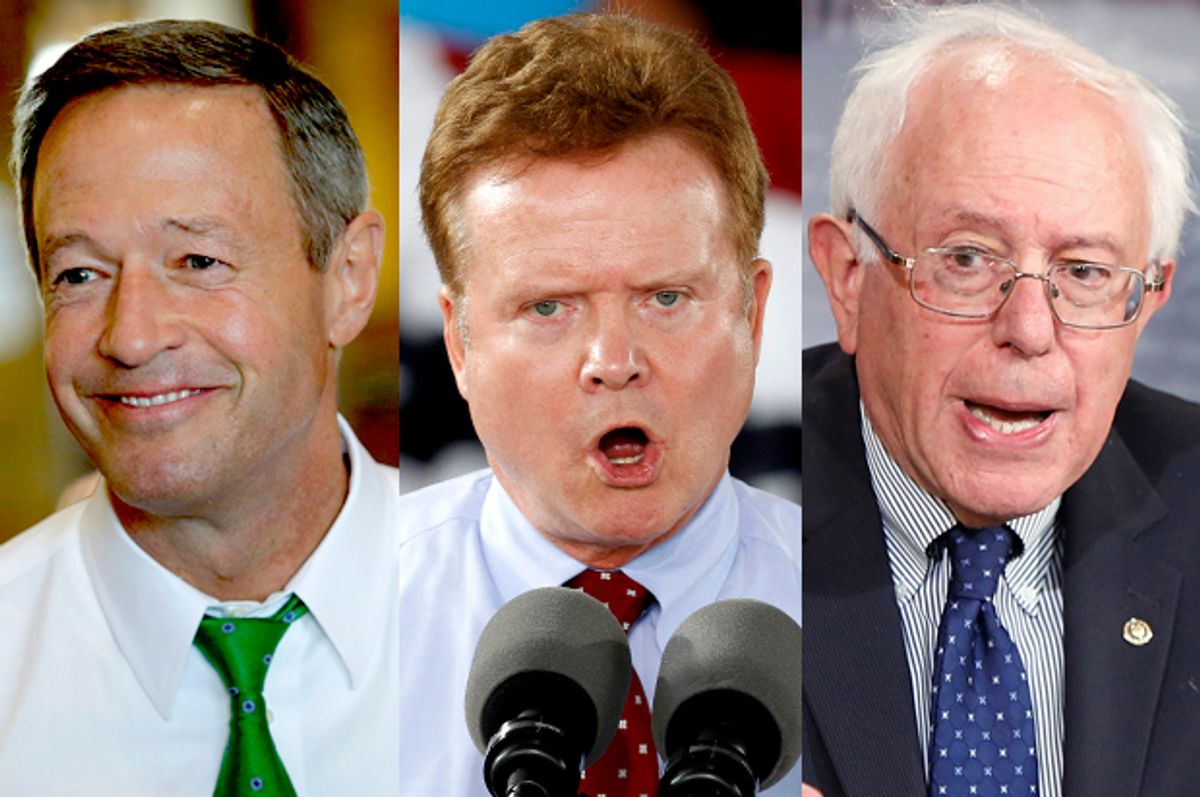 One week after Democrats sustained crushing midterm losses -- and with a unified GOP Congress virtually guaranteeing policy stasis for the final two years of President Barack Obama's tenure -- political observers have already shifted their attention to the 2016 presidential contest. Much of the speculation centers on the Republicans' free-for-all; early polling shows that there's no clear favorite to take up the party's mantle. Meanwhile, with a commanding lead of about 50 percentage points, Hillary Clinton looks like the prohibitive Democratic favorite to take on whomever the Republicans put forth. But if Martin O'Malley, Jim Webb and Bernie Sanders have anything to say about it, 2016 won't witness a Clinton coronation.

The three men -- subjects of an extensive New Yorker piece by Ryan Lizza -- are each laying the groundwork for presidential bids. Mindful of the long odds confronting a Clinton challenger, they're working assiduously to court voters in key primary states and -- just as important -- honing messages aimed at convincing Democratic voters to think twice before awarding their party's nod to the former secretary of state. Though they each bring different professional backgrounds, constituencies and rhetorical styles to the table, O'Malley, Webb and Sanders would each attack Clinton from the progressive left on issues like Wall Street regulation and corporate power, ensuring that even if Massachusetts Sen. Elizabeth Warren sits the contest out, her brand of economic populism will figure prominently in the Democrats' 2016 primaries.

As the youngest of the bunch, the 51-year-old O'Malley is poised to make a generational argument against Clinton's candidacy. The Maryland governor almost certainly won't explicitly go after Clinton, 67, on the age issue, but speaking with Lizza, he subtly hinted that he'd urge Democrats not to go back a generation by nominating Clinton. Referring to his work on Gary Hart's insurgent 1984 presidential primary campaign against former Vice President Walter Mondale, O'Malley told Lizza, “We made the decision at the age of 20 that we weren’t going to defeat Reagan after one term by offering up the same old leadership from yesterday."

Substantively, O'Malley chided the Obama administration and congressional Democrats for what he said was an inadequate 2009 stimulus package and for going too soft on Wall Street banks. “When the Recovery and Reinvestment Act was introduced, it was probably half of what it needed to be, and the congressional parts of our own party watered it down to a half of that, which meant it was about a quarter of what it needed to be,” O'Malley said. Of the administration's response to the financial crisis, he said, “The moment was ripe for much more aggressive action. If an institution is too big to fail, too big to jail, too big to prosecute, then it’s probably too damn big.”

Ostensibly aimed at the Obama administration, that line of attack will also be crucial in the campaign against Clinton, whose cozy relationship with Wall Street banks has long drawn progressive ire. Webb, who represented Virginia in the U.S. Senate from 2007 to 2013, also assailed Wall Street's political influence, telling Lizza, “Because of the way that the financial sector dominates both parties, the distinctions that can be made on truly troubling issues are very minor.”

Webb, whose economic populism resonated with many working-class Virginians who have otherwise abandoned the Democratic Party, also criticized the small-bore economic initiatives that characterized both the Bill Clinton and Barack Obama administrations.

“There is a big tendency among a lot of Democratic leaders to feed some raw meat to the public on smaller issues that excite them, like the minimum wage, but don’t really address the larger problem,” Webb said. “A lot of the Democratic leaders who don’t want to scare away their financial supporters will say we’re going to raise the minimum wage, we’re going do these little things, when in reality we need to say we’re going to fundamentally change the tax code so that you will believe our system is fair.”

Economic anxieties will be paramount in 2016, but more than any other potential Clinton opponent, Webb would also emphasize foreign policy issues. A decorated Marine veteran of the Vietnam War who served as secretary of the Navy during the Reagan administration, Webb has harsh words for both neoconservatives and liberal interventionists. The "John McCains of the world," he told Lizza, "want to intervene everywhere." Meanwhile, "the people who cooked up this doctrine of humanitarian intervention, including Samantha Power ... don’t think they need to come to Congress if there’s a problem that they define as a humanitarian intervention, which could be anything." Webb's words left little doubt that, like then-Sen. Barack Obama in 2008, he would take Clinton to task for her association with the Democratic Party's hawkish wing.

Sanders, an independent U.S. senator from Vermont who would likely run as a Democrat if he decides to mount a 2016 bid, would stick primarily to the bread-and-butter issues that have defined the self-described socialist's political career. Sanders excoriated the Clinton administration's policy record, highlighting Bill Clinton's reappointment of Federal Reserve chairman and Ayn Rand acolyte Alan Greenspan, free trade deals, gutting of the social safety net via "welfare reform," and signing of the anti-gay Defense of Marriage Act.

“The Clinton administration worked arm in arm with Alan Greenspan — who is, on economic matters, obviously, an extreme right-wing libertarian — on deregulating Wall Street, and that was a total disaster,” Sanders told Lizza. “And then you had the welfare issue, trade policies. You had the Defense of Marriage Act.”

But for Sanders, a 2016 campaign wouldn't be about running against Clinton. Asked whether progressives harbor suspicion toward Clinton, Sanders responded, “I don’t think it’s just with Hillary. I think it’s a very deep dissatisfaction with the political establishment.”

There's no denying that most citizens are deeply disenchanted with the country's political elite. Whether that dissatisfaction is any match for a well-oiled political machine, however, remains to be seen.