"I couldn't understand why they were doing this": JPMorgan whistle-blower and Matt Taibbi sound off on MSNBC 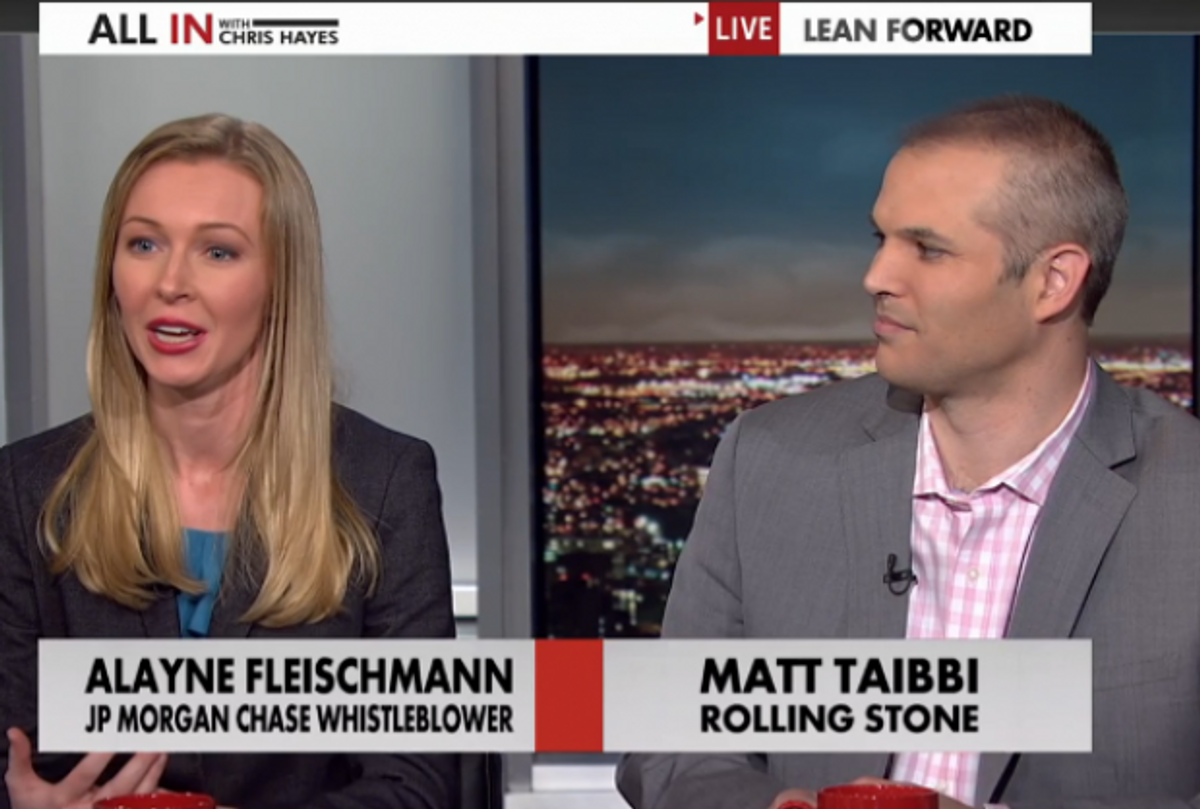 Investigative journalist Matt Taibbi returned to Rolling Stone last week with an extensive report on the case of Alayne Fleischmann, a former JPMorgan Chase diligence manager whose warnings about high-risk mortgage securities went unheeded in the run-up to the financial crisis. In the piece, Fleischmann revealed that prior to being laid off in 2008, she witnessed "massive criminal securities fraud" at the bank, but the Justice Department ultimately opted for a $13 billion civil settlement with the bank instead of pursuing criminal charges. On last night's "All In With Chris Hayes," Fleischmann and Taibbi discussed JPMorgan's conduct, the Justice Department's failure to prosecute Wall Street crime, and why the culture of Wall Street still hasn't changed.

Despite warning that the bank was rating extremely high-risk mortgage loans as safe securities for investors, Fleischmann told Hayes that her superiors' response was "yelling until they get the answer they want."

"They just wanted these pushed through," she added.

Taibbi emphasized that this kind of behavior wasn't confined to JPMorgan.

"This was going on everywhere," he said. "But what’s interesting in this case is that for years and years and years, the Justice Department has been telling us these cases are really hard to prove, we can’t get any evidence, that’s why we’re not pushing any prosecutions. But now we have – clearly – proof and evidence, and it’s obvious that they could make a case if they want to."

Fleischmann agreed. "That’s the key point with these settlements," she said. "They make it look like they’re hard cases but they’re not. … There are emails. There are reports that were ignored. There are vendor reports that were ignored. There are emails from diligence managers, from myself. There’s a letter that sets out exactly who did what and what’s wrong in our diligence process and how that’s going to cause problems in the security."

We all know how Wall Street's decision to ignore such warnings worked out. So, Hayes asked, has the financial industry been chastened by the experience?

"I highly doubt it. Because why would they?" Fleischmann replied. "The things I remember from the time is I couldn’t understand why they were doing this – when you’re looking at loans when you know they’re going to go bad, when you’re selling them to investors – and I think part of the problem is they do know they can bring in their lawyers and their PR and their lobbyists and make it go away. So as long as they know they can do that, why would they stop?"

Watch Fleischmann and Taibbi's appearance below, via MSNBC: