Rig the vote! The right resurrects a shady plan to skew 2016 in the GOP's favor

Conservatives look to 2016 and plan to win on big ideas. Just kidding; they're trying to rig the Electoral College 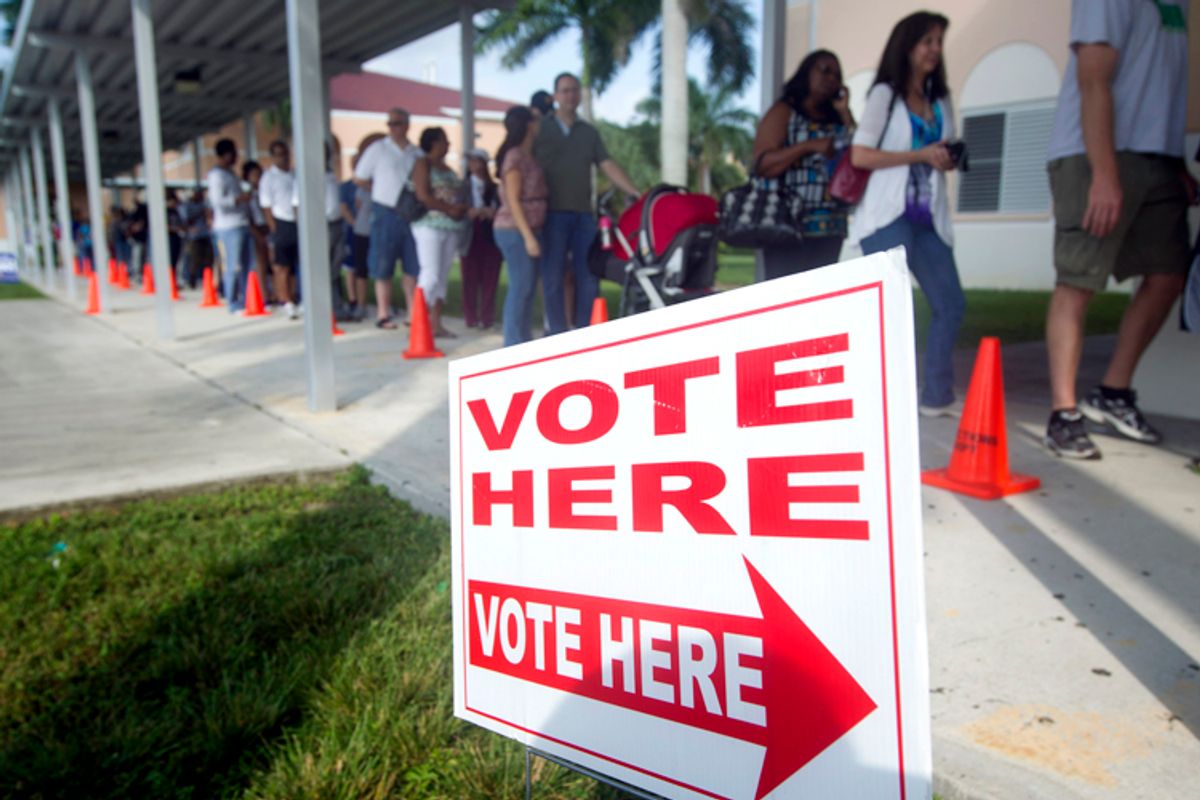 Fresh off a big electoral victory in the midterms, Republicans and conservatives are looking to the future and trying to figure out how they can repeat this year’s success in the 2016 presidential race. It’s going to require some big ideas and some bold thinking. First out of the box is National Review’s Jim Geraghty, who believes it’s time for Republicans to seriously consider a plan to straight-up rig the Electoral College in such a way that it makes it impossible for the GOP to lose:

Starting in January, Republicans will hold state legislative majorities and the governor’s mansions in Michigan, Ohio, Wisconsin, Florida, Iowa, and Nevada. If some or all of those states passed laws allocating their electoral votes by [congressional] districts, all of these purple-to-blue states would allocate their electoral votes in a way that would make it extremely likely for Republicans to win at least half of them. And without half the electoral votes in those states, it would nearly impossible for the Democratic nominee to win.

This idea has been kicked around for a couple of years now by conservatives who realize that it will probably be easier to just rig elections in their party’s favor than to go through the tiresome business of actually convincing enough non-white, non-elderly people to vote Republican. And make no mistake, this proposal is a brazen and blatant attempt at electoral thievery.

Last year, conservative activists made a spirited (but unsuccessful) attempt to push legislation in various swing states to break up their electoral vote apportionment by congressional district. Republican campaign operative Jordan Gehrke wanted to take the movement national, and defended the scheme by claiming it would restore a measure of “fairness” to presidential elections:

The question is fairness. We already have a system where you can win the popular vote and lose the election. I'm not saying this is a perfect system; I'm saying that, given that we have a fundamentally imperfect system, this is an improvement.

Gehrke was right that our current method for electing presidents is an outdated and byzantine system that gives outsized influence to certain states and isn’t entirely “fair.” His proposal, however, would make the fairness problem worse. Much, much worse.

It’s true that the current system for assigning electoral votes allows for presidents who lose the popular vote to be elected president, but that happens infrequently. Disbursing electoral votes according to congressional district will ensure that it happens much more often. The New York Times ran various scenarios after the 2012 election and found that if Virginia, Michigan, Ohio, Pennsylvania, Wisconsin, and Florida had assigned electoral votes on a district-by-district basis, then Mitt Romney would have won the presidency despite losing the popular vote in all those states. If the system had been in place nationally, Romney would have taken 277 electoral votes and the White House with just 47 percent of the vote to Obama’s 51 percent.

From whence does this GOP advantage derive? Gerrymandering. The precise and partisan redistricting system Republicans have used to great effect to protect their congressional representation would pull double duty in presidential years, effectively neutering the urban districts into which reliably Democratic voters have been corralled and redistributing their clout to the sparsely populated rural districts that vote Republican. “If votes are quarantined in a single Congressional district,” the Atlantic’s David Graham wrote last year, “it doesn't matter if the turnout in a city is 50 percent, 70 percent, or 100 percent; there's only one electoral vote on the table, plus the two at-large electoral votes. This takes almost all the venom out of the formidable Democratic get-out-the-vote operation.” It’s disenfranchisement on a grandiose scale and invites challenges to the legitimacy of elected leaders.

But it certainly is creative! Really it’s remarkable that some of the most dynamic and audacious thinking coming out of the GOP these days is focused on figuring out ways to keep Democrats from voting or robbing those voters of their influence. They are positively crackling with ideas when it comes to voter suppression. And who can blame them? A party that successfully rigs the system to make it impossible for the other side to win doesn’t have to worry too much about demographic shifts, and it relieves the pressure to come up with healthcare policy or immigration reform proposals. They can just campaign on tax cuts and be confident that the Democrats’ votes don’t mean as much as theirs do.

Geraghty, at least, doesn’t bother pretending that proposals to switch to a district-by-district system are about fairness. His case begins and ends with the fact that it would make it much easier for the GOP to win and that it wouldn’t violate the Constitution. That’s not a legitimate argument for going down this path, but with Republicans in control of so many key state legislatures, that’s no guarantee it won’t happen.