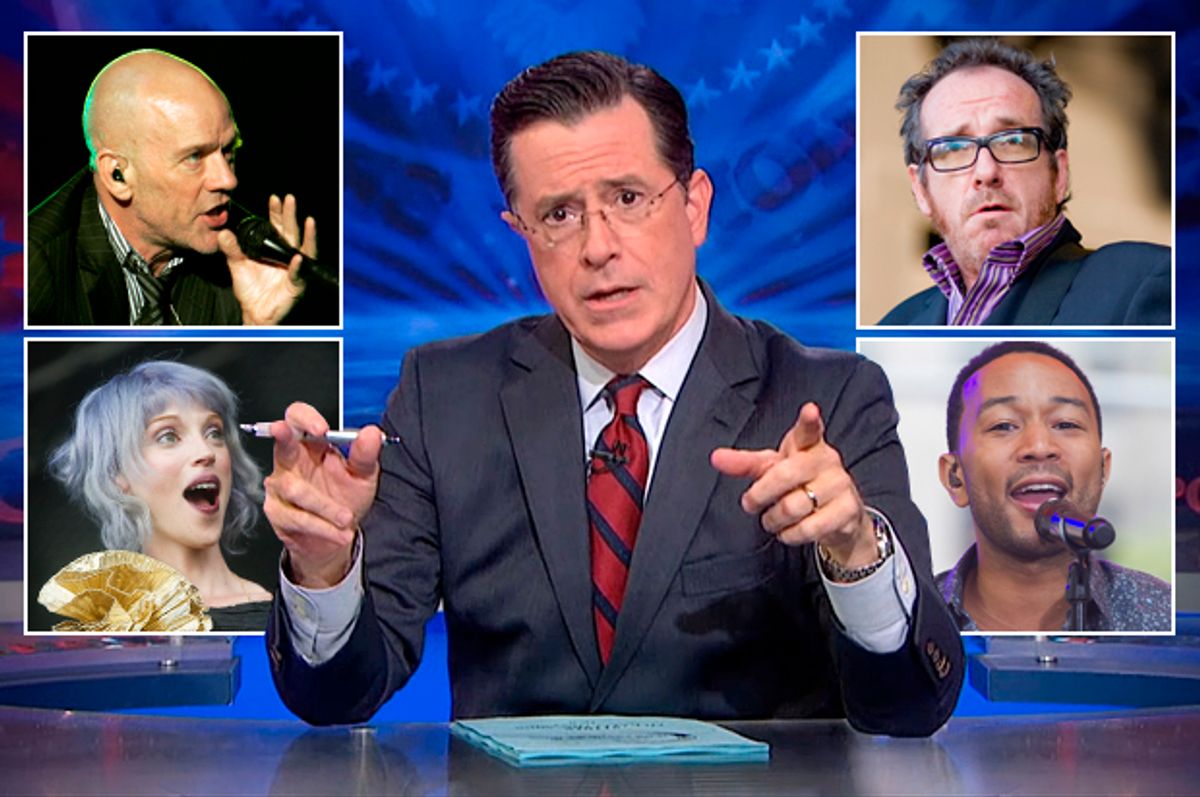 After 22 years at the helm, David Letterman will leave the "Late Show" in 2015, replaced, of course, by Stephen Colbert. There's been no end to speculation about how Colbert’s "Late Show" will differ from Letterman’s. How much will Colbert’s political progressivism affect a show hitherto largely devoid of politics? Can Colbert be funny without his mock-conservative character? Will we pronounce the silent t?

But Letterman’s bandleader Paul Shaffer will also be leaving, as will, one assumes, Shaffer’s crew in the CBS Orchestra. So here's the major question that no one is asking: Whom will Colbert select to play him in each night?

Colbert’s friend and "Tonight Show" host Jimmy Fallon announced a new era in late night when he chose the aggressive, almost agitprop, Philly hip-hop crew the Roots to be his house band. The Roots’ legendary corpus of socially conscious hip-hop brought a hard edge to Fallon’s boy-next-door affability and steered the late-night musical model away from big band-type conventionality palatable to older white audiences. It is likely that Colbert will follow suit and choose an unconventional band for his show, if his choices for musical guests on "The Colbert Report" are any indication.

CBS Entertainment chief Nina Tassler reported in July that Colbert was still deciding on whether to have a house band. It is difficult to imagine, however, that Colbert, a musician himself with a lifelong passion for music, would opt to forgo the opportunity to assemble his own house band. In fact, evaluating his choices during the nine years of "The Report" presents some possible -- if highly speculative -- candidates for the job.

Colbert, born in 1964, hit adolescence in time to experience the '70s. The youngest of 11 siblings, Stephen was weaned on years of “hand-me-down albums,” he told NPR’s Terry Gross in 2012. By high school, the Colbert family record collection brought Stephen from “the beginning of rock 'n' roll through mid-'70s soft rock, folk, post-folk, ‘feel good festival.’”

These early influences have been well-represented on "The Colbert Report," with the show hosting Carole King, Jackson Browne, James Taylor, Paul Simon, Kris Kristofferson, Yusuf Islam (formerly Cat Stevens), Willie Nelson and Crosby, Stills and Nash. And in his late teens, Colbert appears to have rounded the bend toward the '80s with a departure from the “feel good festival” and an exploration of the sort of music that would form the basis of his future tastes. He would discover Elvis Costello, who became his favorite songwriter. “If there was somebody’s songs I wish I had written, it would be Elvis Costello’s songs,” he told Gross. Costello is now a Colbert friend, and he’s performed on the show four times, including the 2008 Christmas special.

So Costello leaps out as a possible bandleader. Exhibit A: Costello hosted the "Late Show" in 2003 when Letterman was out recovering from an eye infection. Costello’s charisma and on-camera ease would make him a good fit as a Shaffer-like sidekick in addition to his musical duties. Costello’s sharp, often sardonic wit and shared rapport with Colbert would make for entertaining banter, a staple of late-night shows. The two have even performed together four times on "The Report," something that might become a feature of a Colbert/Costello "Late Night," much like Jimmy Fallon’s frequent musical collaborations with the Roots crew. Importantly, Costello might bring longtime keyboard player Steve Nieve into the new house band. Nieve served as bandleader for popular U.K. late night host Jonathan Ross during the 1980s.

But we’re still in the late '70s/early '80s, and Colbert’s more contemporary musical choices still provide some candidates for the position. Colbert appears to have developed a much more eclectic musical palate during his late teens and early 20s. Colbert’s penchant for literary rock music is seen to have developed during this time. Seminal college rock band R.E.M. performed on the show, and frontman Michael Stipe returned to perform in an unlikely trio with Colbert and '70s electronic pioneer Brian Eno. David Byrne of the Talking Heads has appeared twice. Other artists from the era appearing on "The Report" help round out Colbert’s tastes at the time: Chrissie Hynde of the Pretenders, Philip Glass, Iggy Pop and Cheap Trick.

The Cars were “a huge band” for Colbert, and Cars frontman Ric Ocasek is a “longtime friend of the show,” appearing on the show as both a musical guest and as an actor in bits. Ocasek is a heralded producer in his post-Cars career, so he’d likely be able to enlist a number of great musicians to form a house band. But Ocasek is not a household name and lacks the charismatic presence of Costello, so it’s doubtful that he’s in consideration.

Another clue is suggested by Colbert’s most common musical choices. One subgenre dominates the roster of musical acts on "The Colbert Report," a particular strain of literary indie rock of the past 20 or so years. Colbert is, after all, a consummate nerd, and since Costello he appears to have sought similarly sophisticated lyricists. Musical guests like the Decemberists, Vampire Weekend, the Mountain Goats, Andrew Bird and Ben Gibbard (of Death Cab for Cutie and Postal Service) all point to this preference for ultra-literary indie pop artists. That tendency is confirmed by a whole host of invited artists from the indie intelligentsia: Grizzly Bear, Pavement, Wilco (and frontman Jeff Tweedy, solo), Feist, the Ben Folds Five, TV on the Radio, Bon Iver, Arcade Fire, St. Vincent and the National.

Few, if any, of these acts would work as house bands. Annie Clark of St. Vincent and Andrew Bird both have the requisite musical chops, but neither is at a point in their respective careers where it would make sense. Arcade Fire would be an amazing house band, but the chances of that arrangement have to be nil.

Ben Folds, though, stands out as a real contender. Colbert has already said that he wants Ben Folds to perform his song “Best Imitation of Myself” on "The Colbert Report’s" last show, with Colbert accompanying in duet. Folds is a composer and arranger, and he debuted his first piano concerto this year with the Nashville Symphony. Folds has served as judge on NBC’s "The Sing-Off" for three seasons, proving his comfort with on-the-spot television work.

Or Colbert might follow Fallon’s lead and choose a more hip-hop-oriented band. As you might expect, Colbert’s tastes in hip-hop tend toward the more high-brow “lyricist,” distinguished from the mere “rapper.” Outside of an appearance by Snoop Dogg — very much a rapper, not a “lyricist” — the show has exclusively featured lyrically advanced artists, such as Lupe Fiasco, Nas, pre-Fallon-era Roots, and the RZA. "The Report" even hosted a rare performance from Black Star, a now-defunct duo of lyricists Talib Kweli and Yasiin Bey (formerly Mos Def).

It doesn’t appear that Colbert is a big hip-hop fan, but R&B star John Legend has appeared on the show more than any other artist. Legend, with his willingness to be outspoken on political and cultural issues, would be an apt interlocutor for Colbert. It certainly doesn’t hurt that Legend is telegenic, young and a potential means to attract a wider demographic.

But in the end, barring a dark horse who’s never appeared on "The Report," it’s difficult to imagine anyone other than Costello taking the spot as bandleader. As of right now, Costello has hosted the "Late Show" more times than Colbert. He’s Colbert’s favorite musician, and they’re friends. It all adds up. Costello, though, will be 60 years old when the show debuts, and millennial audiences might not connect with a performer whose most famous songs were already classics before they were born. Fallon’s success has come with throwing away the old model and injecting youthfulness into late night, and the Roots have been a big part of Fallon’s script-flipping. Colbert will no doubt take a different tack than the younger Fallon, but the two are competing for the same valuable 25-to-54 demographic. But whenever it's announced, his choice for his house band might tell us a lot about what to expect from "The Late Show With Stephen Colbert."