All the things we project onto Kim Kardashian's butt: How one woman's rear end came to mean everything 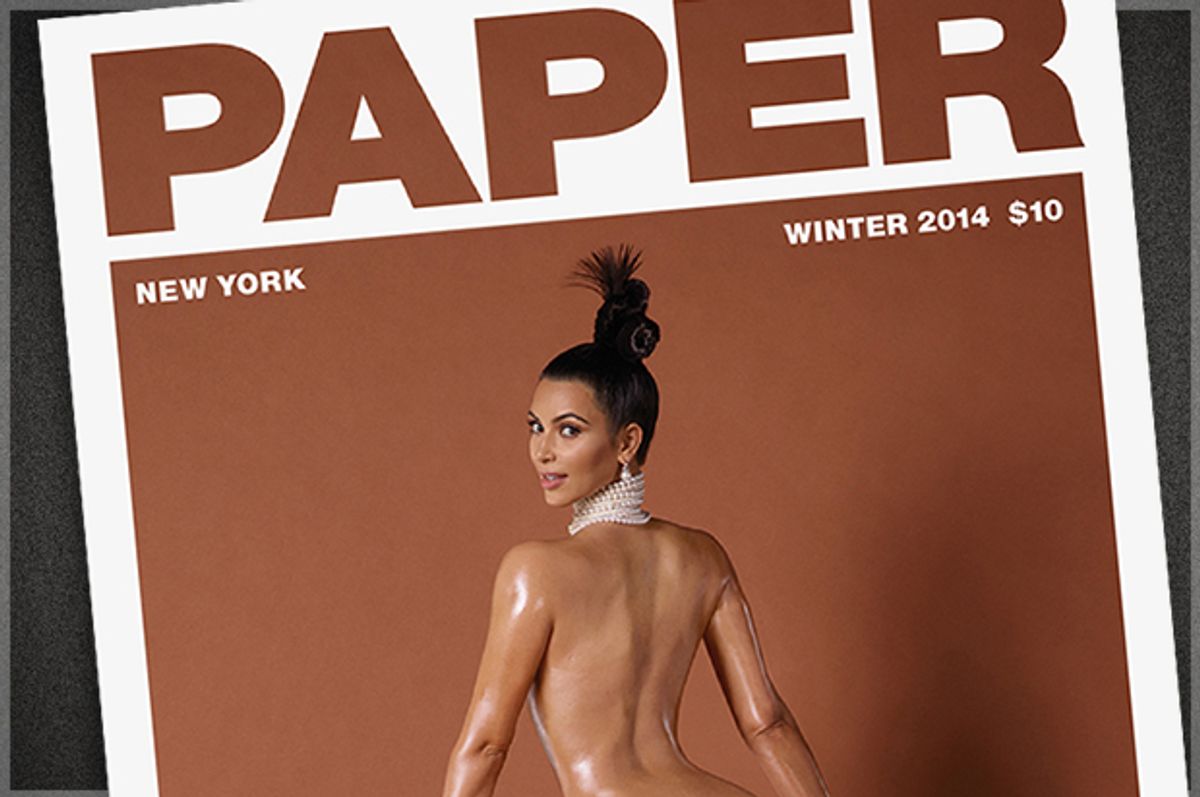 Sorry, Paper Magazine, but Kim Kardshian’s naked butt isn’t going to break the Internet. The Internet has seen some butts in its time, and if a single nude backside had that kind of power, we’d all be wandering in a post-apocalyptic wasteland by now. Which is not to say that Kim’s famous posterior doesn’t wield its own peculiar power. When she posted the image of December’s Paper cover to Instagram last night, more than 100,000 comments poured in, and for every “flaunt it if you got it” cheer, there are five strongly-worded concerns, each less grammatically-correct than the last. Like a round, shiny mirror, Kardashian’s butt reflects back to us our myriad cultural panics and anxieties, inviting us to oil them up and present them to the world in one glorious compendium of concern trolling and shame that reveals more about us than any magazine cover could of her.

The most telling style of comment is the mommy-shaming, that evil twin of MILF-dom. This is where other women project their anxieties about being expected to be both supermothers and "yummy mummys" all in one effortless, efficient package onto Kim Kardashian’s naked butt. (See: get your bikini body back by hand-milling your own organic baby food!) Mommyshame is the most bulletproof of concern trolling because we’re just trying to think of the children here, since she obviously won’t.

Mommyshames range from the gentle: “I freckling love you Kim, but one day your children will be able to see this doesn’t that seem wried to you.” (@sophiemay101) to the more vigorous finger-wag: “She’s someone’s mother. Where are your panties!” (@Amor_belle)

Here, a particularly advanced form of time-traveling concern trolling that predicts a “Cat’s In the Cradle”-style circle of public nudity for little North West: “You’re a mom. Remember it. What would u do if your daughter see this 10 years later?! She’ll be like “omg my mom did it si I can and then she’ll be a whore just like u.” Give the good exemple.” (@Its_rky)

Not everyone on Instagram is thinking of the children. Garden variety slutshaming made its predictable appearance, too, including the evergreen snide one-liner “Your father would be proud” (@Vtulls) and the jaded sigh: “Not surprised your naked this is how you got started anyway.” (@asclassyasiam) But Instagram’s heart isn’t really into it, preferring a dose of shopworn, Dr. Drew-style pop psychology of the “look who doesn’t get enough attention at home" variety instead.

More interesting is the class shame (#KeepItClassy!), because while Americans hate to talk about class, we love to assume we were born with more of it than the next guy, and we definitely know it when we see it: “There’s trashy and classy and this is trashy.” (@theresajajou) Several of the class shaming comments invoke Beyoncé, who clearly did not ask to be dragged into this, offering her up as a sort of WWBD? classiness standard that Kardashian might consult before pulling these kinds of stunts.

The plastic surgery and Photoshop experts of Instagram, however, are not convinced. Injections! Implants! Complete computer fabrication! “Why does it look like a shiny piece of rubber? everyone knows NO ONES bootie looks like that” (@anessahansing)

The hypocrisy watch turned out to register their complaints, revealing just how conflicted we are about women’s sexuality, the female form, and celebrity culture: “This is the same chick upset that her nudes were leak with the other celebrities ….. guess she only wants to be nude for money. #NoMorals #Smh.” (@Mz_natlasha)

Not all of the hypocrisy falls in Kardashian’s court, though. “I think this is a prime example of how it is expectable for someone of Kim’s caliber to do this, but for Nicki Minaj (who did have underwear on) it is just disgraceful.” (@lovelyrenae2)

So haters, you’re on notice: “If Gisele bundchen did this, it would be classy and elegant, she wouldn’t be called a bad mom, yall a bunch of jokes.” (@asapfugazzi)

Because the whole world is going to hell and this is the first stop: “I wonder how much she got paid for this. What’s the going-rate of a soul these days?” (@tarawrenblue)

In summary: exhibiting your body is a desperado’s game, not to mention an unseemly, tasteless activity for a mother and a wife. If there’s anything the Internet abhors, it’s a woman asking for the external validation it so enjoys withholding. Even though Kardashian couldn't break the Internet, she should still consider this cover release a mission accomplished. Anyone who can ignite such multi-dimensional anxiety on this visceral level remains untouchably relevant, naked or not.