Bye-bye, blue dog "Democrats": What the end of conservative Dems means for America

Now that John Barrow of Georgia has lost, an old species is facing extinction. Here's what the Dems should do 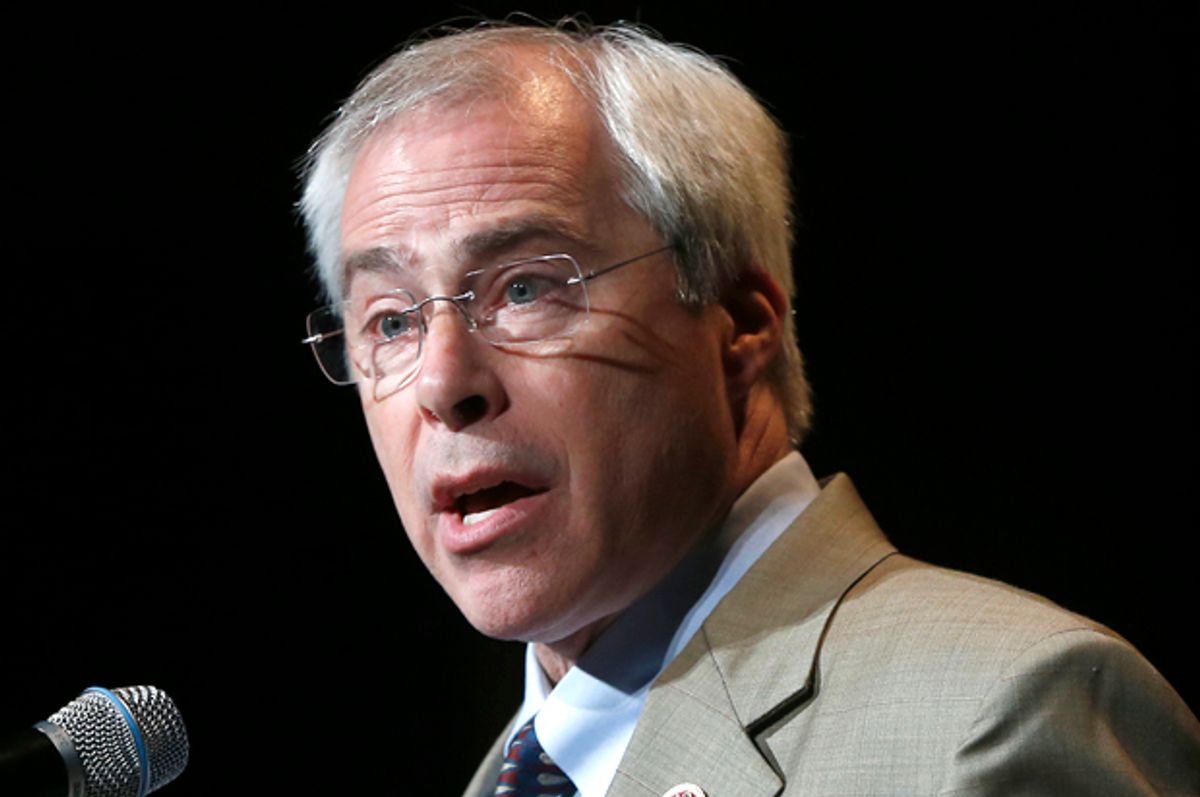 One of the headlines coming out of each of the last three elections has been the impending extinction of the Blue Dog caucus in the House of Representatives. Last week's trouncing sounded the death knell of the last Blue Dog left in the wild of the Deep South, John Barrow of Georgia, and that fact has got a lot of political pros running around in circles lamenting the loss of that Democratic species and trying to figure out how to reintroduce them back into their habitat. What they don't realize is that the Blue Dog was a horrible Frankenstein experiment gone wrong and it's far better for the political environment if they just pass quietly into extinction before they permanently damage the eco-system.

Blue Dogs weren't just a southern phenomenon, although their leadership was certainly centered there and the concept behind them was consciously derived from the old Southern Dem saying "I'd even vote for a yellow dog if it was a Democrat." There was more to it than that, though. As Ed Kilgore pointed out in this piece, the Yellow Dog Democrats were simply Southerners who saw the Democratic Party as "the default vehicle for day-to-day political life, and the dominant presence, regardless of ideology, for state and local politics." In that sense it was similar to the machine politics in the urban centers. This was how you got business done, got favors, wielded influence in your community. Ideology existed but there wasn't anything particularly consistent about it.

The Blue Dogs were formed in the wake of the 1994 election of the new GOP House majority. They took on the mantle of "conservative Southern Democrat" for the obvious reasons, but they were something more than that. Despite their image as southern traditionalists, they didn't ever claim to be centrists or social conservative or regionally affiliated. There is no consensus as to why they called themselves "Blue" dogs (as opposed to purple dogs or green dogs) but one of the stories says they were blue in the face from being choked by liberals. Another says they were left out in the cold by liberals so they turned blue. Whatever the actual genesis of the term, it's fair to say they desperately needed a hug.

Kilgore astutely observes that they were in agreement about one thing on a strategic basis:

Everything about the Blue Dogs (at least in the South) was designed to convince ancestral conservative white Democrats to persist in their ancient voting habits on the non-presidential level on grounds of solidarity with said Democrats’ grievances with the national party. “Triangulation” was central to the Blue Dog message in a way that was never entirely true for Bill Clinton or the DLC or other Democratic heretics.

Rebels 'til the end. But as much as they came together to give Democrats a vehicle to hate other Democrats, they were also organized around a very specific set of issues. Here's how they have always defined themselves:

The Blue Dog Coalition, formed in 1995, is an official caucus in the U.S. House of Representatives comprised of 15 fiscally conservative Democrats that are deeply committed to the financial stability and national security of the United States and dedicated to finding bipartisan solutions to the nation’s biggest challenges.

Democrats in the Blue Dog Coalition hail from every region of the country, from as far north as Maine, to as far south as Georgia, to as far west as California and Oregon. Many of its members also come from America’s heartland, including representatives from Texas to Minnesota. What unites the Coalition is the desire to work with both parties to get the nation’s fiscal house in order, spur private-sector job growth, strengthen the economy and ensure the long-term economic stability of the United States.

To be sure, they also tended to vote with the right on national security issues but they were explicitly organized around market based economics and fiscal conservatism from the very beginning and they never wavered in their dedication to those ideals. The only changes to their organizing principles came recently in which they added some new areas of concern:

While the Blue Dogs have historically been particularly active on fiscal issues, the Coalition has currently developed four task forces not only focusing on fiscal responsibility and accountability, but also energy, economic growth, and oversight and regulatory review.

Not that the members weren't traditional values types. Most were. And they surely ran for office on those issues as well. But there is not one word in the official Blue Dog materials about social issues. The old local Democratic yellow dog institution may have been a party that openly included "traditional" views on culture and race but the new Blue Dogs were all about the Benjamins. They were, in fact, simply an arm of the Chamber of Commerce, industry and Wall Street.

In 2008 the Blue Dog caucus in the House boasted 54 members. By 2014 they were down to 19. After last week, they're down to just 10. As as mentioned before, none of those 10 are from the deep South and only a handful are from any part of the South. Despite the fact that the Democratic Party went to great lengths to recruit new Blue Dogs, they all lost to Republicans. And as much as everyone may be hoping they can regroup and win back some seats in more favorable terrain in 2016, it's unlikely. Despite very heavy Party recruitment of right wingers willing to call themselves Democrats, the 2012 election didn't repopulate the group and in places where there were Blue Dogs in more liberal districts, they were challenged from the left in primaries and lost.

The question on Democratic strategists' minds in the wake of last week's rout is once again focusing on how to put Humpty Dumpty together again. Kilgore makes the important point in his piece that simply talking the populist talk isn't going to do it:

I would warn against the very popular assumption that Democrats can simply intone “economic populism” and regain traction among “the economically pressed white voter” of the Deep South. All the reasons Democrats are struggling with non-college-educated white voters nationally are especially strong in the South: racial and religious fears, anti-urbanism, militarism, and mistrust of unions as well as Wall Street. And for a whole host of reasons, including exceptionally weak union affiliation levels and a neo-colonial heritage as a region starved for capital, the Deep South is going to be more “pro-business” than most of the country, and you can see that in the behavior of minority as well as white, and Democratic as well as Republican, politicians.

Howard Dean used to famously insist that the guys with confederate flags flying on their pick-ups trucks ought to be voting with the Democrats because they need health care too. And yes, you'd think so. But they haven't done it, as Kilgore says, for a whole host of reasons.

On the other hand, it didn't help the Blue Dogs to be so "pro-business" that they sold themselves lock, stock and barrel to the financial elites either. But, as political parties are wont to do, the Democratic establishment decided that the problem was more a matter of "branding" and "messaging" than a problem of strategy or ideology. Somewhere along the line all these Southern Conservatives decided they just didn't like those Blue Democrats as much as they like those Red Republicans so it must be the logo or the sales pitch that didn't work. And as it happens, in anticipation of the imminent extinction of the Dogs, they thought ahead enough to hire Dr Franken-Dem to cobble together yet another monster to take their place.

They cleverly called it the New Dem Coalition. Started back in 2005 when the Dogs started to disappear, by 2010 the new Dems had become a powerful force in the Party. In this article about the financial reform process in 2010, they were described as "a group of 69 lawmakers whose close relationship with several hundred Washington lobbyists has made their organization one of the most successful political money machines since the Republican K Street Project collapsed in 2007."

And this is how they describe themselves on their web site:

A fiscally-responsible, moderate bloc of lawmakers dedicated to policies that foster American success, the New Democrat Coalition is a vehicle for the millions of Americans who feel unrepresented in today's broken political process.

As you can see it's completely different than the Blue Dogs. Except for the fact that it's exactly the same.

So, what can the Democrats do? As long as they are the party of racial minorities, feminists and "liberal elites" it's going to be very hard to appeal to Southern conservative white working class folk, even with populist language that reflects the party's history and fundamental values. Kilgore's right that just talking about what they should want isn't being responsive to what they actually do want. But maybe the Democrats have finally reached that point at which they no longer have anything to lose by just doing the right thing. For at least three decades they've been pushing Blue Dogism and look where it got them.

Besides, there's little reason to believe that the New Dems will survive in the wilds of conservative America any better than the Blue Dogs did. For some reason no matter how loudly they say it, right wingers cannot hear the Democrats' howls about "fiscal responsibility" because they've got the volume on Fox News cranked to 11 where they're screaming 24/7 about "illegals"  and "death panels." Maybe the Democrats should stop barking up the wrong tree, point them in the right direction and see what happens.