Chris Rock's poisonous legacy: How to get rich and exalted chastising "bad blacks"

Respectability politics isn't new. But with Charles Barkley and Bill Cosby now joining in, here's why it's so toxic 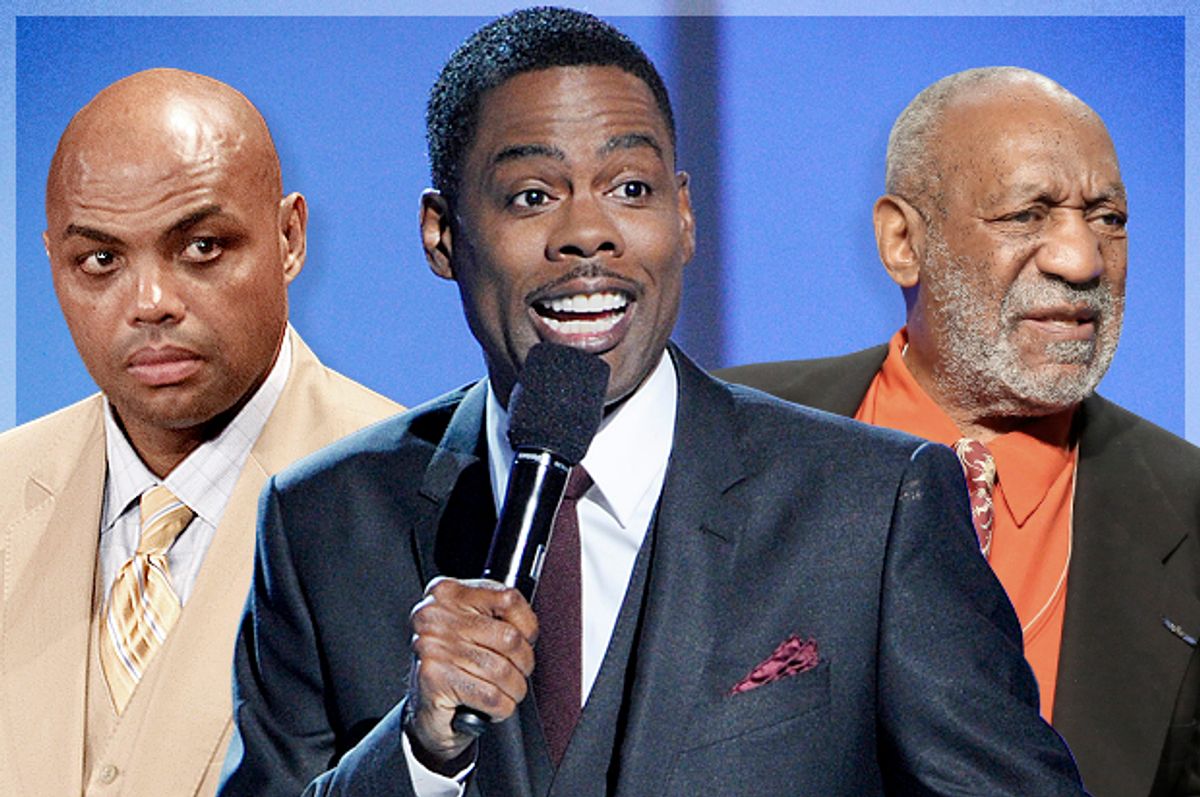 In 1996, Chris Rock told a joke. Granted, he told a number of jokes, because he’s a comedian and that’s literally his job. But he only told one joke that would come to serve as the basis of analysis for a generation of would-be sociologists and pseudo-black-intellectuals everywhere.

The joke here being that there is a subset of black people that are gleefully uneducated, take pride in their criminal activities, and serve as the clumsy sidekick in black America’s plan for liberation. If it weren’t for them, the n--gers, we’d all be free.

“I hide my money in books. Why? Because n--gers don’t read.”

The n--gers aren’t just unworthy of basic levels of respect, they deserve open contempt and ridicule. Because, well, just look at them!

On the strength of this joke, the centerpiece of his HBO special “Bring the Pain,” Chris Rock became a household name, and the “black people vs. n--gers” debate became as divisive as Malcolm vs. Martin.

Of course, the substance of what Rock said wasn’t new. It hewed to the same line of respectability politics that had been a part of black political life since the days of Reconstruction. Even W.E.B. Du Bois, perhaps the most important sociologist in all of American history, posited a theory for black liberation that rested on the idea that 90 percent of black people ain’t shit and could only be saved by the “talented tenth.” He later abandoned that idea, but it got stuck in our collective imagination nonetheless. Rock’s language was different, and jarring, offering a legitimacy to the use of a racist slur to describe a class of people, but even that wasn’t new. After leaving the Nation of Islam, Malcolm X reportedly said, “We had the best organization the black man has ever had. N--gers ruined it.” Malcolm’s context was different, but the rhetoric is still in line with the idea that it’s the bad black people who ruin things for the good black people.

And every now and then some black public figure will reignite this debate by repeating these tired tropes that traffic in racist assumptions of black life and culture. Enter Charles Barkley.

We as black people are never going to be successful, not because of you white people, but because of other black people. When you are black, you have to deal with so much crap in your life from other black people …. For some reason we are brainwashed to think, if you're not a thug or an idiot, you're not black enough. If you go to school, make good grades, speak intelligent, and don't break the law, you're not a good black person. It's a dirty, dark secret in the black community …. There are a lot of black people who are unintelligent, who don't have success. It's best to knock a successful black person down because they're intelligent, they speak well, they do well in school, and they're successful. It's just typical BS that goes on when you're black, man.

Bill Cosby said it, Don Lemon keeps saying it, Jason Riley has a whole book about it. The greatest barrier to black success, according to this reasoning, is the host of bad black people who refuse to get their shit together and would rather bring every other black person down with them than to pick up a book. The language is more polite than when Chris Rock was calling them n--gers, but not by a significant margin.

It doesn’t matter how much debunking is done, because this strain of respectability politics is easy to comprehend, fits neatly into our racist system, and has the potential to be lucrative. You won’t go broke by taking up the chastisement of “bad blacks” as a career. You may lose your soul, but you can just go buy a new one with the cash from your book deal/radio show/TV pundit gig/speaking fees.

What bothers me just as much, if not more, than the profitability of this line of thinking, is that anyone who engages in it (Barkley, Lemon, Riley or whoever) positions him- or herself as some sort of exalted truth teller, revealing the secrets black America is too afraid to face. They won’t touch the truth of how white supremacy has dictated the contours of black American life, but telling kids to pull up their pants and stop acting like “thugs” is right up their alley.

Moreover, these aren’t secrets. They’re flat-out lies. The truth is closer to what Damon Young writes over at VerySmartBrothas:

...if you actually go to a hood, you’ll find that if there is a young person with actual academic or athletic potential — basically, someone who seems to have a ticket out of the hood — there will usually be waaaaaaaaaaaaaaaaaaaay more people rooting for and even protecting them than actively wanting them to fail. Maybe their methods of protection and support might be unorthodox and even occasionally counterproductive, but the supporters, the ones genuinely happy to see someone from their block who’s “made it,” tend to outnumber the haters….

...anyone from Leeds, Alabama or Gary, Indiana or Youngstown, Ohio or Compton, California who made it out obviously had some help from some of these “bad” Black people. Some poor Black family in your neighborhood who allowed you to stay at their place for a month because the lights were out at yours. Some kid in your class who took the rap when you both were caught stealing chips from the cafeteria, because even he sensed your future was brighter than his and you couldn’t afford to get in this type of trouble. Some assistant principal who wouldn’t allow you to play football your sophomore year because you were failing social studies. Some church that organized a bookbag drive so you and the other kids in the neighborhood would be prepared for the first day of school. Some drug dealer who’d tease you about being a nerd, but told the other drug dealers not to mess with you because you were going to college.

The real “dirty, dark secret” is this: the n--gers helped us survive. It’s all of those welfare queens, dope-dealing cousins, liquor store-robbing uncles, cable-stealing aunties, drunk granddads, and fast-tailed grannies who have made any of our relative success possible. It was those dope-dealing cousins who were able to buy someone’s kids' school supplies. It was a good-for-nothing-drunk-of-an-uncle who fixed cars that helped folks get to work. It was an aunt who had five kids out of wedlock who did someone’s hair and made alterations on their suit for a job interview. It was those fight-at-the-drop-of-a-dime thugs who made it safe for their younger brothers and sisters to walk through their neighborhoods unmolested. It was the money from a grocery store robbery pulled off by an illiterate grandfather that kept the lights, gas and water on.

Is this true for every black person? Of course not. The only universal constant in the black American experience is racism. But it’s that racism that produced a situation whereby people were forced to go into survival mode, and more often than is comfortable to admit, survival techniques look like outlaw activities. And even more uncomfortable to admit is that black survival techniques become criminalized. Still, someone in our community persists along those outlaw lines because they understand there is no hope for anyone else if they don’t.

But instead of asking why the options for black survival are so limited, the proselytizers of respectability politics would rather reify the theories of black inferiority that excite the white racist imagination.

What the “bad blacks” have understood better than the mouthpieces of respectability is that under white supremacy we won’t all “make it.” Under the current system, there isn’t room for all of us at the table, no matter how high our pants are pulled up or how great our diction. In order for some of us to achieve, the “bad blacks” sacrificed themselves.

In praise, it sounds as though I’m flattening the identities of those people who are usually deemed unworthy, and to a degree, I am. We are all complex, we contradict ourselves, are neither all “good” or all “bad.” But counter-narratives are important, particularly when the dominant narrative only serves to dehumanize. So here’s to the bad blacks, making black America’s survival possible, even if they never find that money in Chris Rock’s books.