In a major breakthrough, the two nations agreed to make significant cuts to greenhouse gas emisisons 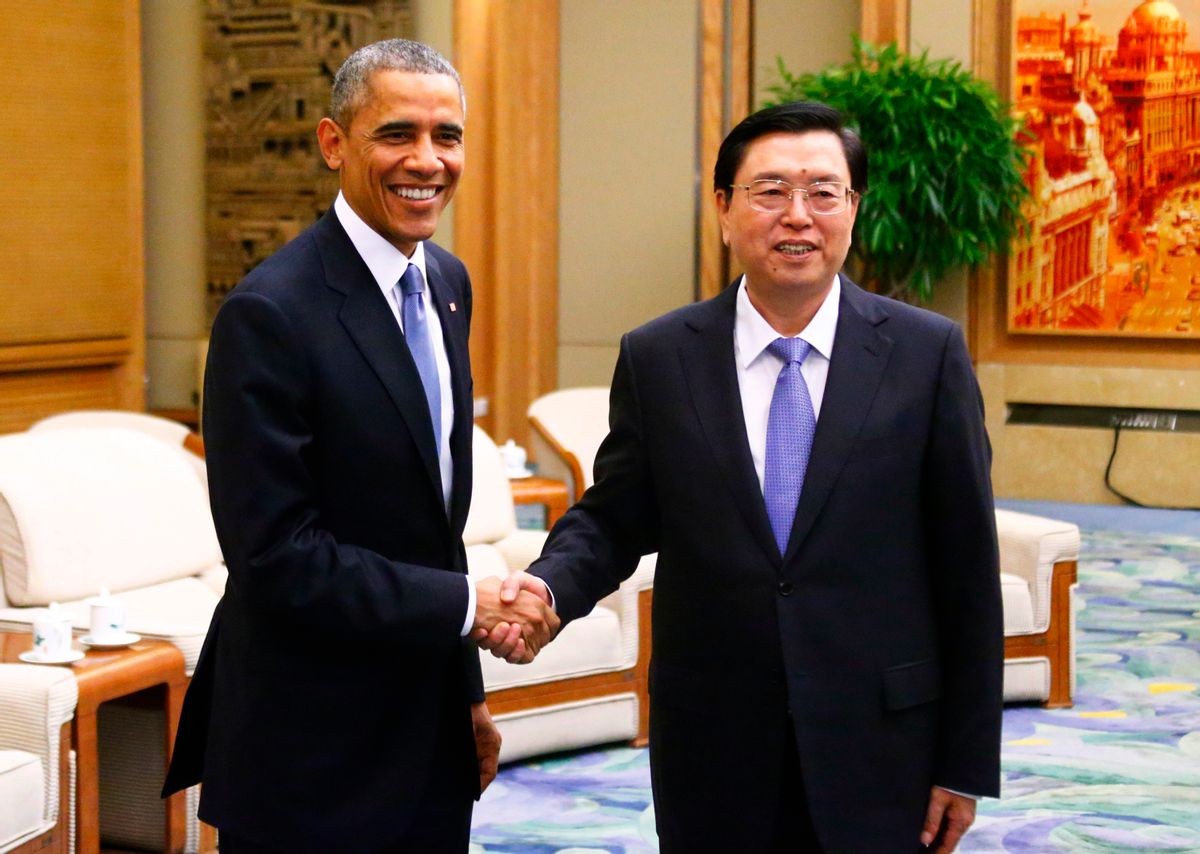 U.S. President Barack Obama (L) shakes hands with Chairman of the Standing Committee of the National People's Congress (NPC) Zhang Dejiang during a meeting at the Great Hall of the People, in Beijing, November 12, 2014. REUTERS/Petar Kujundzic (CHINA)
--

It's not every day that you wake up to the breaking news that the planet might be OK, after all. In an unexpected breakthrough, the U.S. and China announced Tuesday night that they've reached a major agreement to take on climate change, pledging sweeping emissions cuts that could kick-start international negotiations toward a climate deal in 2015.

And if the two countries are actually able to pull them off, they'd be pretty significant for the climate, too -- especially compared to what's currently being done. Presidents Barack Obama and Xi Jinping shook hands over a deal that, for the U.S., will mean cutting emissions by 26 percent (the baseline) to 28 percent (the stretch goal) over 2005 levels by 2025. As Michael Levi at the Council on Foreign Relations explains, that means first hitting our 2020 target of a 17 percent cut, and then upping the pace considerably from there, cutting emissions by 2.3 to 2.8 percent a year until 2025. If we could a) meet that rate and b) keep it up, that would put us on course to cut emissions by a full 80 percent by 2050.

China, for its part, is pledging to make its emissions peak by 2030, if not sooner, and to increase renewables' share of the energy mix to 20 percent by that same time. Sure, it's less specific, but getting there will necessarily mean major changes in business as usual -- and this is one of the very first indications that China's on board for that challenge.

At the U.N. Climate Summit in September, which Xi did not attend, China's vice premier mentioned an emissions peak for the first time, pledging that the country would work to get there "as early as possible." Given that China already accounts for about 30 percent of the world's emissions pre-peak, that's not nearly soon enough. The year 2030 is late, but still promising: The difference between the U.S.'s baseline and stretch goals, Levi points out, comes to about 120 million metric tons of CO2. That's less than China's projected growth for the five years leading up to 2030, meaning that "a mere one-year shift in the Chinese peaking year could matter at least as much to global emissions as the difference between the various U.S. targets that have now been announced."

Planet not saved, of course, by a long shot. Once you get over the excitement of seeing these two leaders -- whose countries, together, account for 40 percent of the world's collective greenhouse gas emissions -- taking climate change seriously and working together to do something about it, the doubts start to creep in. Can China, which blocked air pollution data after it failed to clear its air enough for the U.S. delegation's arrival, really be trusted to live up to its promise? Just how high will that promised peak be above its current emissions levels? How in the world will Obama, who didn't need Congress to make this deal but sure as hell will to make these cuts, actually see this through?

In an Op-Ed for the New York Times, Secretary of State John Kerry, who's been quietly working on these negotiations for the better part of a year, calls the United States' commitment, which he says is "grounded in an extensive analysis of the potential to reduce emissions in all sectors of our economy," both "ambitious and feasible." But that's only if we're trying: America's anti-environmental environment leader in the Senate, James Inhofe, has already doubled down on his commitment to derail the EPA's efforts to rein in emissions, a goal that new Senate Majority Leader Mitch McConnell feels a "deep responsibility" about as well.

And with the world on track to blow past the agreement to limit warming to 2 degrees Celsius, even a deal this momentous is way less than what needs to be done. According to the U.N.'s Intergovernmental Panel on Climate Change, global emissions need to be eliminated entirely by the end of the century if we want to avert “severe, pervasive and irreversible” consequences. This new agreement, IPCC chair Rajendra Pachauri said, is "a heartening development" and "a good beginning" but it doesn't quite get us there. One early calculation from economist Chris Hope finds that, even accounting for the European Union's recent pledge to cut emissions 40 percent by 2030, we're still looking at about 3.8 degrees Celsius of warming by 2100. But that's assuming that the rest of the world continues on with "business as usual" -- the hope, now, is that U.S.-China leadership will compel everyone else to step up to the plate. There's no longer any room for excuses.