State Sen. Donna Campbell introduced an amendment for the second time that could codify anti-LGBT discrimination 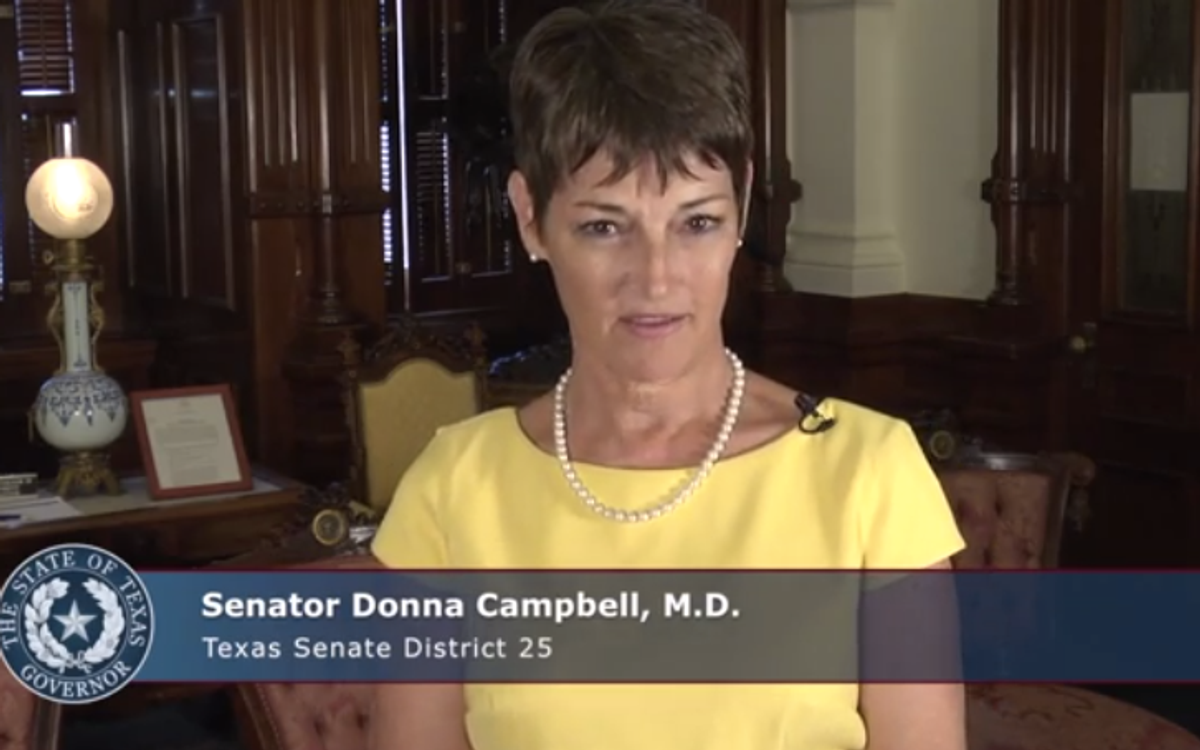 Texas state Sen. Donna Campbell wasn't successful the last time she introduced a constitutional amendment to strengthen the state's existing protections for religious freedom, so she's trying a second time -- with a proposal that would effectively give Texas business owners a "license to discriminate" against LGBT people (or anyone, really).

On Monday, the Republican legislator proposed Senate Join Resolution 10, "relating to a person's freedom of religion," which is worded broadly enough to allow business owners to refuse service to LGBT customers, according to Lone Star Q:

Government may not burden an individual’s or religious organization’s freedom of religion or right to act or refuse to act in a manner motivated by a sincerely held religious belief unless the government proves that the burden is in furtherance of a compelling governmental interest and is the least restrictive means of furthering that interest. For purposes of this subsection, the term “burden” includes indirect burdens such as withholding benefits, assessing penalties, and denying access to facilities or programs.

But that's just one potential outcome; as Lone Star Q notes, Campbell's proposal is almost identical to one she introduced in 2013, which raised concerns from critics on both sides of the aisle for being overly broad, in addition to being redundant. According to Texas Monthly, Campbell's resolution reiterates state laws such as the Texas Religious Freedom Restoration Act, which "prevents a government agency from 'substantially burdening a person’s free exercise of religion' unless the government has 'a compelling governmental interest to do so,'" in addition to freedom of religion clauses in the U.S. and Texas constitutions.

It could also have a number of unintended implications that would be anathema to Campbell, a self-proclaimed champion of family values. In addition to potentially allowing Westboro Baptist Church protesters to picket military funerals, the religious freedom amendment could effectively invalidate Texas antiabortion measures -- a point raised by none other than Joe Pojman, executive director of Texas Alliance for Life.

“We do not oppose the concept of a religious freedom amendment,” Pojman said last year. “Rather, we are concerned that a future court could misconstrue the expansive language [of a "a sincerely held religious belief"] ... our concern is that abortion will become a religious right.”

Whether or not the amendment would extend a religious right to abortion isn't clear, but the potential for anti-LGBT discrimination -- which remains legal in about 30 states, including Texas -- certainly is.