Her facial expression -- open-mouthed, cartoonish, decidedly unsexy -- is the best thing about these photos 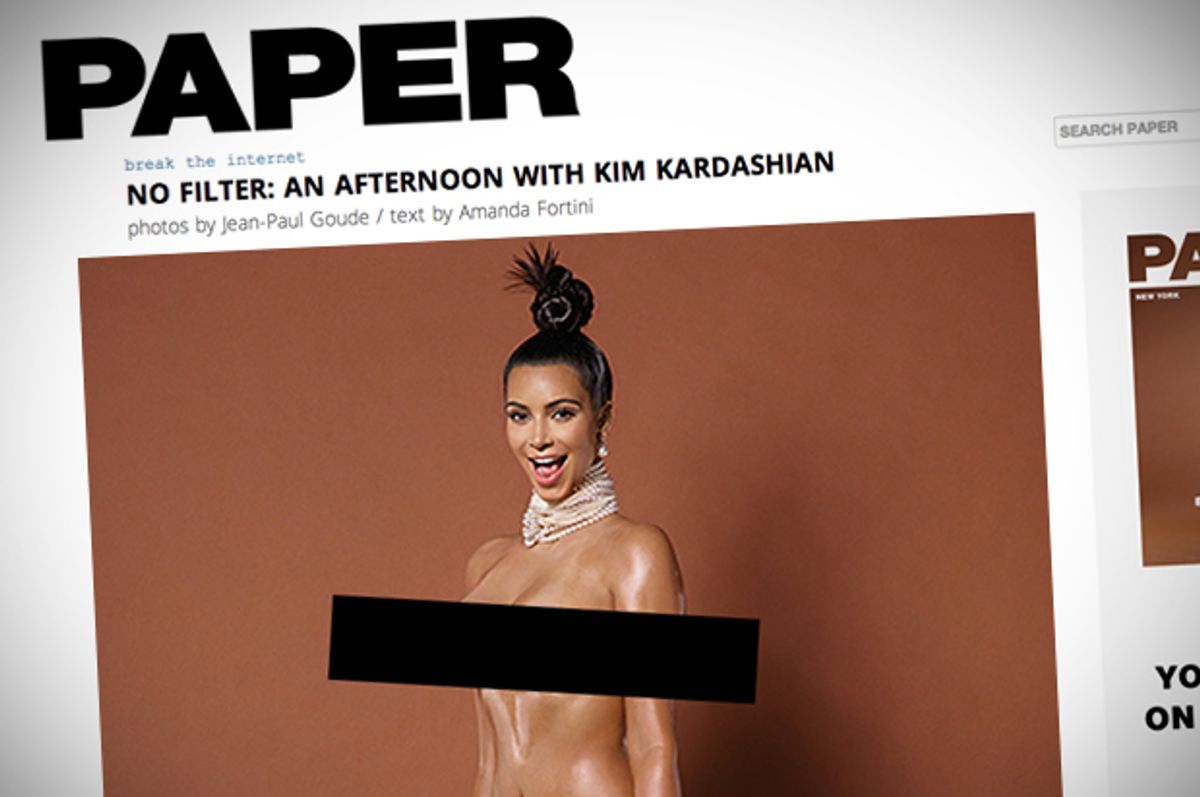 A day after her naked butt threatened to break the Internet, Paper revealed another side of Kim Kardashian’s photo shoot (NSFW!) — a full-length, full-frontal nude portrait, seeing and raising the  “top that!” challenge in record time. OK, now that you’ve seen the rest of Kim … look at her face.

It’s quite refreshing to see naked photos published of a woman who, instead of opting for the sexy pout or the come-hither smile, opts instead for the delighted, open-mouthed laugh of a little kid streaking down the hallway after a bath. Compare her face in these photos with her typical red carpet smize, or even the dreaded selfie duck-face, and you’ll see a woman who’s having a really good time. It makes sense. Editorial director Mickey Broadman told New York mag that stripping down for the shoot was Kardashian’s idea.

Speaking of things you weren’t looking at when you were looking at naked Kim Kardashian, the cover story by Amanda Fortini is worth a read. She meets Kardashian for lunch at the Polo Lounge in Beverly Hills in an attempt to discover who the woman is behind the think pieces that establish her as either “a feminist-entrepreneur-pop-culture-icon or a late-stage symptom of our society's myriad ills: narcissism, opportunism, unbridled ambition, unchecked capitalism.”

On her way to the table, Kardashian stops to take a selfie with a fan, confessing later that she doesn’t usually use filters on her own. No wonder. As Fortini observes, “I notice that her skin, which is the golden color of whiskey, is free of wrinkles, crow's feet, laugh lines, blemishes, freckles, moles, under-eye circles, scars, errant eyebrow hairs or human flaws of any kind. It's like she comes with a built-in filter of her own.”

What Fortini observed is a woman in complete control of her presentation at all times, because “being is her act.” Every physical detail, from her eyelashes that resemble “miniature feather dusters” to her “doll-like ears,” is immaculately unreal: “She is like a beautiful anime character come to life.”

If Kardashian does apply a filter, it's on her social presentation. Her vocal delivery is “Zen-like,” her presence “pleasantly languid.” Kardashian’s job is to be herself, just the most unreal, perfect version of herself she can possibly be. So she doesn’t allow herself to express frustration over paparazzi. She affectionately dubs her family’s reality show “the best family movie ever,” which somehow, against all odds, has not destroyed their relationships with each other in the process. “We’re kind of obsessed with each other,” Kardashian said.

Ultimately, this is what Fortini lights on as the key to understanding Kardashian’s success: “It is a fame whose hallmark is agreeable omnipresence, which resembles a kind of evenly spread absence, soothing, tranquil and unobjectionable.” Take another look at that goofy smile on her frontal-nude portrait. It's a rare thing — a glimpse under the smooth, perfect Kardashian surface, under her self-applied filter of "Zen-like," highly lucrative calm. Sometimes when the curtain is pulled back on a celebrity's public side, we get a glimpse of a specific kind of loneliness, an emptiness that fame and money can't fill. For someone whose job it is to be a perfect version of herself 24 hours a day, that open-mouthed, audacious smile seems to say that Kim K still enjoys her work.