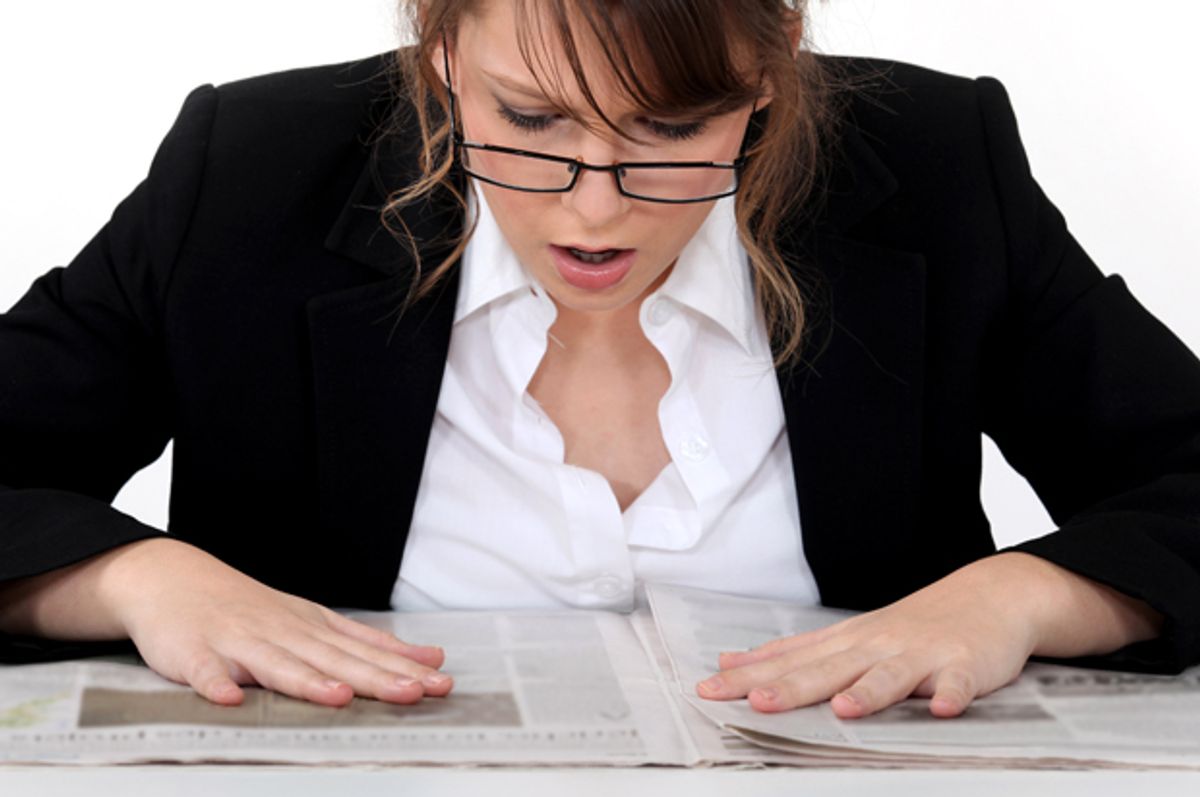 This past Sunday, the public editor of the New York Times, Margaret Sullivan, took stock of her realm, wondering in print if the Times, with its approving surveys of high-end doughnuts and reports on how the Beastie Boys’ Mike D struggled to keep his townhouse renovation below half a million dollars, was resonating with readers of modest means. In “Pricey Doughnuts, Pricier Homes, Priced-Out Readers,” Sullivan poses the query of whom the Times is for to executive editor Dean Baquet, who admits that the question is “one of the bigger tensions” in big-picture forecasting. And Sullivan is forthright in noting that both “self-awareness and, yes, empathy” are often lacking not only in the paper’s news stories on wealth and poverty, but also in coverage of food, style and much more.

In reading the piece, I appreciated Sullivan’s honesty perhaps more than I needed to — after all, she’s just doing her job — but I also wish her piece had addressed one key place where the big tensions she was addressing — between wealthy and poor, affluence and striving, Dominique Ansel and Dunkin’ Donuts — have consistently been centered in the past couple of decades. That place? Motherhood.

The NYT, after all, was the media property that first trumpeted the triumph of motherhood-as-self-actualization back in 2003, with its now-notorious magazine cover story on “the opt-out revolution” that heralded elite, Ivy League–educated women happily swapping out legal briefs for binkies. “The Opt-Out Revolution” wasn’t the kind of rigorously reported piece characteristic of the magazine; rather, author Lisa Belkin used herself and seven of her friends — all Princeton graduates who had the money and resources to drop out of an unrewarding rat race — to press the disingenuous conclusion that feminism had given women the choice to do what they really wanted. (Which was, you know, to not work.) Both the piece itself, and the clickbait-before-clickbait-existed headline (“Q: Why Don’t More Women Get to the Top? A: They Choose Not To”) set the tone for more than a decade of work-balance trend pieces that individualized systemic issues of economics and gender into a matter of “choice,” and helped construct a cultural vision of motherhood that not only regularly elides class and race analysis, but erases anyone but women from the parenting picture.

Since Belkin’s piece, the NYT’s coverage of motherhood has whiffed at least as often as it has connected with readers, often spectacularly. There was the August 2011 piece on women who are befuddled when their ongoing campaigns to look youthful via hair-coloring and teeth-whitening have no antiaging effects on their fertility. There was the September 2013 report on stay-at-home mothers flummoxed by the extra week of summer vacation necessitated by an early Rosh Hashana; the dispatch didn’t see fit to interview working mothers whose schedules were disrupted, though the reporter did talk to a male lawyer from Westchester who was less than sympathetic to his stay-at-home partner’s plight. (“This is not my problem.”) And who can forget February 2013’s piece on the self-described “Nanny Doctor” who mediates between the 1 percent and their often fractious household help? (“I just don’t know if she has passion about Olivia,” one mother compained of a too-opaque nanny.)

So it isn’t surprising that, like many that came before, the NYT’s Oct. 30 profile of actress Brandy Burre tipped practically into caricature. The story is nominally about a new documentary, of which Burre is the subject; called "Actress," it’s an intimate look at the consequences of her decision to take a break from her career in order to move upstate and raise children, a result that Burre describes as “disenfrachisement from my own life.” Beneath the headline “Strutting and Fretting Offstage,” the subtitle announced that, “Seven years ago, Brandy Burre left New York and a promising career for a life of artisanal parenthood. She is now performing the hardscrabble role of a single mother.”

Let’s stop for a second to appreciate that “artisanal parenthood” is a phrase that someone — maybe not the profile’s author, Lauren Sandler, but someone — consciously put together. The piece offers next to nothing in defining what “artisanal parenthood” is. It mentions that Burre has two children, aged 8 and 4; it dwells on the fact that she and her ex-husband undertook some cosmetic renovations on a house whose “hideous orange” interior necessitated an intervention (in other words, the bare minimum of what homeowning  or -renting people do all over the world every day); it notes that Burre served homemade lemon-ginger soda out of a mason jar to the visiting reporter. The nonsensical application of both “artisanal” and “hardscrabble” to this mundane state of affairs is obnonxious, but it makes sense both in the context of the Times’ past dispatches from the rarefied heights of overparenting and  in a self-consciously individualistic culture where random nouns and adjectives are regularly applied to normal human behavior as a way to insist that some of us are doing it better than others. (See also: “conscious uncoupling.”)

The piece’s subtitle was changed shortly after author Susan Orlean mocked it on Twitter, and now reads ‘“The Wire’ actress, long retired, is back in a film about herself.” But whatever the tag line, the piece seems to go out of its way to ignore the gendered tensions that characterize Burre’s plight. It offers more page space to photos of its subject’s “vintage dishes and tea-towel curtains” than it does to limning the divisions of male/female labor that caused her marriage to strain; it gives no more weight to the fact that the marriage ended when her husband discovered Burre had a lover back in the city than it does to a passage about an oversize bathtub.

Sullivan’s article mentioned the “artisanal parenting” piece only in passing, which seems like a missed opportunity because what the article is, unintentionally, really about is the overwhelming tone-deafness with which not just the NYT but so much other mainstream media covers motherhood and the losing economic bargains made in its name. It’s about how such pieces recast entrenched narratives as supposedly individual choices that their choosers are shocked — shocked!—don’t turn out any better for them than they have for millions of women, decade after decade. And it’s about the role that venerated media properties have in perpetuating cultural narratives.

What Belkin described as “opting out” in her 2003 piece — and what followed in the resulting decade-plus of copycat cover stories like Time’s “The Case for Staying Home,” New York’s “The Retro Wife” and countless more that reported on the “trend” — was much more about being pushed out as a result of inflexible workplace policies and untenable tradeoffs for working parents. But though fact-based correctives to the opt-out myth have been numerous, from census numbers to institutional reports to the NYT’s own 10-years-later look back, it still persists — in large part because the phenomenon, let’s face it, has never been just about parenting, but about using the specter of “bad” mothering to guilt women away from full participation in the public sphere.

In a culture that is increasingly both pronatalist and mom-centric, there’s a benefit to more dot-connecting, not just within the New York Times’ newsroom but across the whole of media and popular culture. There’s a clear link, for instance, between the profile of Burre and two of the NYT’s even newer motherhood-related articles: one, from Heather Havrilesky, on her unease with the cultural blossoming of the belittling term “Mommy” (“Our ‘Mommy’ Problem”); another, from longtime advocates for pregnant women Lynn Paltrow and Jeanne Flavin, an Op-Ed on how last week’s election results stand to affect the civil rights of women with both wanted and unwanted pregnancies (“Pregnant, and No Civil Rights”).

That link is the mediated world where mothers are the only visible agents of parenthood, and thus the ones who shoulder every bit of pressure, blame and stress. In pop culture, there are takedowns of Tiger Mom and Pinterest Mom and Dance Moms. In the news, there are the well-meaning mothers sent to prison for falsifying their addresses so their kids can go to a good school and the bad mothers who attempt to kill their autistic children. In tech, there are the would-be mothers wooed by Silicon Valley companies that appeal to female job candidates with egg freezing, which lets them suppress their fertility until it’s most convenient for their employers. Everywhere from the language of those benefits packages to the descriptions of dissatisfied opt-outers like Burre, the burden of parenting is squarely on mothers. Fathers, if they’re mentioned at all, are positioned as tangential to the lives of children; they may not say, like the father mentioned above, “This is not my problem,” but erasing them from the narrative sends just that message.

Am I overthinking all this? Maybe a story about renovating a house, getting divorced and having your neighbor make a movie about it doesn’t need to go deeper. Maybe a trend piece about teaching your child’s nanny the difference between quinoa and couscous is supposed to simply function as unintentional comic balm for the souls of the less ostentatiously privileged among us. But, as a mother, as a reader and as a person who believes in the transformative power of media, I’d like to think that articles that are more transparent about what they’re leaving out can change the frames themselves.