TV's curse of the sophomore slump: Why genre shows like "Sleepy Hollow" and "Reign" go off the rails

After a tense, compelling first season, it can be a death sentence for a show to redeem its villains too quickly 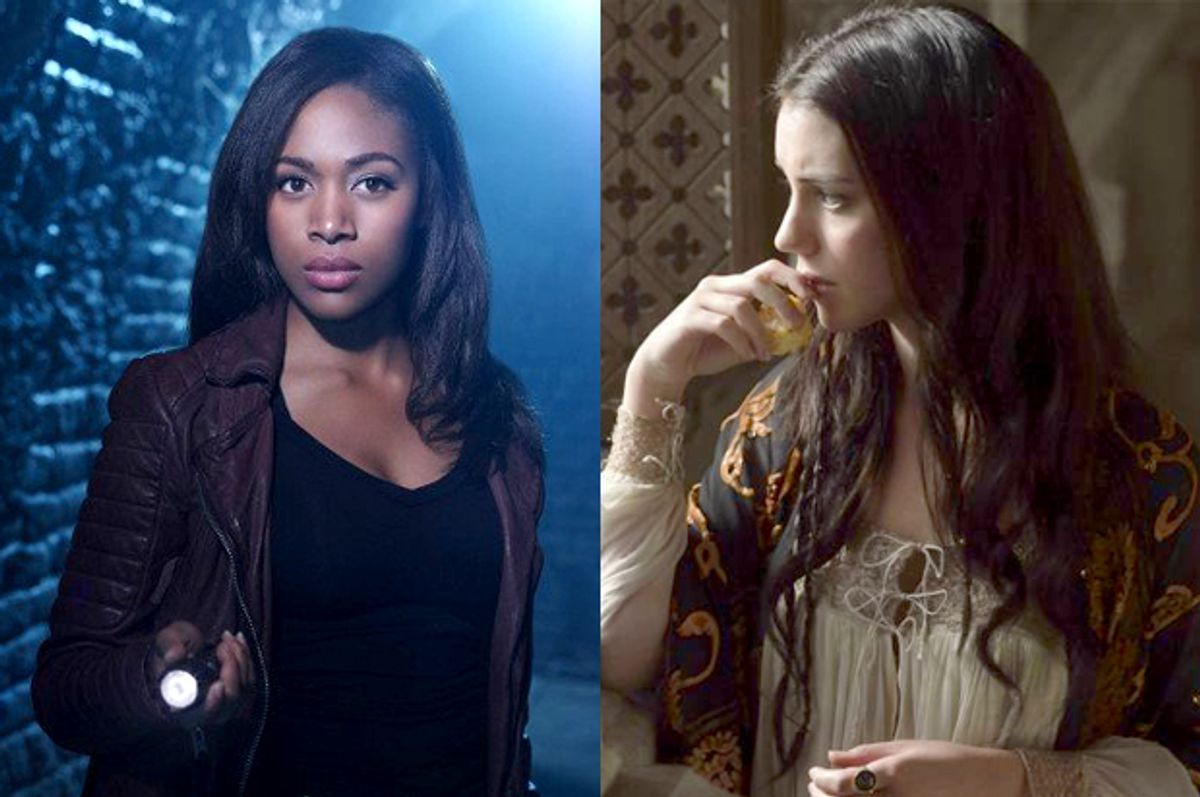 The hardest thing about being a fan of television is that often, right under the audience’s nose, the show starts to change into something we don’t like anymore. It’s the pain of any serialized medium; television’s the most ubiquitous, but fans of the "Harry Potter" series who hated the fifth book will know what I mean, too. Episode to episode, week to week, a show has to find a way to build upon what’s come before. And then season to season, as the studios renegotiate contracts, find new cast members, swap out staffs, and switch up time slots, is an even harder transition.

But as predictable as this is for television fans, it’s still painful when it’s happening right in front of you. And I fear this is happening to “Sleepy Hollow,” a supernatural drama that was one of Fox’s breakout hits last year. In its second season, it’s not that the show has exactly transitioned from “good” to “bad” — “Sleepy Hollow” at its best is more “batshit” than “good” — but rather that the series has lost sight of what made it so addictive and entertaining in the first place.

Partly that’s because for “Sleepy Hollow” and other shows like it, the line between “amazing” and “terrible” can be very hard to see. Unlike, for example, the aspirations of Showtime’s sophomore “Masters Of Sex,” which aims at highbrow prestige drama, and NBC’s “The Blacklist,” which aims squarely at middle procedural, “Sleepy Hollow” is aiming where a lot of genre shows do — fun escapism grounded in character. It’s a genre that creates some of our most interesting television — it’s how Joss Whedon’s “Buffy The Vampire Slayer” and Stephen Moffat’s “Doctor Who” become cult hits. They might not be as award-winning and intellectual as the highbrow or as reliably formulaic as the procedural, but what tends to make them stick out are casts and crews having a lot of fun opposite engaged and enthusiastic audiences. Yes, you have to watch “Homeland” so you can discuss it with your parents. But first, “Orphan Black,” because you want a free hour that demands nothing from you except a willingness to play along.

To recap: In its first season, “Sleepy Hollow’s" central relationship between Tom Mison’s Ichabod Crane and Nicole Beharie’s Abbie Mills make for a lower-stakes Mulder and Scully, where UFOs are replaced with horsemen of the apocalypse. In between their burgeoning friendship (that could be more, the show is eager to remind its fans) and the slow uncovering of the secrets around Sleepy Hollow, the show offered up a faux-historical semi-biblical mythology of doom. Ichabod tried to understand modern conventions like skinny jeans and bottled water; Abbie tried to teach Ichabod how to fist-bump. Then they would go kill demons.

Now the show is inexplicably mired in the falling-out of Ichabod’s relationship with his, wife Katrina (Katia Winter), a character so badly served by the show that she has been pregnant with a demon baby twice now. Katrina’s presence reduces the time the show can focus on Abbie and Ichabod, which just slows down the show — ship it or not, it’s their relationship that is the central one of “Sleepy Hollow.” (I mean, did you see the second-season premiere?) Despite bringing on John Noble as a series regular, the stakes of the war against evil have lowered, not heightened, and of late every episode starts with a double-entendre cold open. Perhaps most egregious was the one where Abbie and Ichabod were shown sweating and intense in close quarters. It looked like they were having sex; they were instead doing yoga. It’s funny — and frustrating; clearly, the show is having a bit of fun with its audience, which can only go so far before it starts to get annoying.

Todd VanDerWerff wrote earlier this year about what he terms “the second-season curse,” observing that “a chief reason the second season of a TV show is hard is because the series no longer belongs entirely to its creative team.” A second season is when “there are expectations placed on a show from its fan base … Trying to figure out what the audience responded to in season one can be enthralling, but it can also very quickly turn enervating if the production team and audience (and critics) valued different things.”

That hits the nail on the head. The most frustrating thing about this season of “Sleepy Hollow” isn’t that the story has been a bit lackluster — it’s fine, it’s just not fantastic. But the producers don’t seem to be entirely clear on what made the first season of the show good. (Mo Ryan at Huffington Post just laid this out in excellent detail, too.)

But I’ll take it one step further. We’re seeing a sophomore slump for some of the most promising shows from last season—where niche shows that got critical acclaim and devoted fans by taking a lot of risks are spinning their wheels in the second season, having apparently painted themselves into a corner. And much of that is because the shows have jettisoned the idea of having any villain whatsoever. Redeeming villains is great fun, of course, but along the way “Sleepy Hollow” managed to burn through its supply (or killed off the remaining ones). Now there’s a war between good and evil that doesn’t feel like good and evil, because the sort-of bad guy was a lost and confused abandoned child, and it’s really hard to hate on John Noble when he’s being all cool on-screen.

I am super enthusiastic about deconstructing villains and villainy, but not at the expense of drama. There are plenty of dicks in the world, “Sleepy Hollow”; if you have to redeem Noble’s Henry and the currently lovelorn headless horseman, why not just find a few more baddies to toss into the mix?

“Sleepy Hollow” is the most frustrating example, but I’m seeing the same mistakes with “Reign” and, looking back, the second season of “Orphan Black,” too. “Reign” isn’t technically either science fiction or fantasy, but its version of historical fiction is so deliberately and hilariously off-base that it might as well be supernatural. The first season pulled the characters through a heightened teen soap with an unbelievable sense of humor about itself. (Lorde’s “Royals” was covered by a minstrel band during a court dance set in the 16th century. I cannot stress this detail enough.) And yet this second season has shown the show spinning its wheels a little, trying to find enough story to go around so that Adelaide Kane’s Mary, Queen of Scots is still experiencing a tolerable amount of relationship drama with her husband, the king of France. In Season 1, there was definite tension between Francis and his half-brother Bash for Mary’s affections, while Mary navigated French court under the stern eye of her future in-laws Queen Catherine and King Henri. In short, there were villains everywhere, and “Reign” had a great deal of fun blowing up viewers’ conceptions of all of these characters (and then killing most of them off, too, because why not).

Now Megan Follows’ Catherine is on our side — a waste of the fantastic presence she has as an evil mother-in-law — the insane king is dead, Bash has been neatly married off to one of Mary’s ladies-in-waiting, and even Nostradamus (yes, Nostradamus is in this show) has been sent away from the castle. “Reign” is scrambling a little to keep up, and though it’s found a charming new villain in Lord Narcisse (Craig Parker), its characters are all entirely too well-intentioned for comfort. (Recently Mary went so far as to argue that she and her husband should encourage religious tolerance in France; this, even though technically, her primary claim to the throne of England is that she’s a practicing Catholic. I’d rather Mary was outright evil than only mildly good-hearted and sort of dumb, to boot.)

“Orphan Black’s" middling second season story line — as a separate entity from its character work, which was some of its best yet — is the end result of trying to pan further and further out with the stakes of a show, to the point that stakes barely exist at all anymore. The Dyad Institute was the show’s big villain for a long time, and then Cosima and her girlfriend Delphine get jobs with them, because plot. The show rushed to make a terrifying religious cult into the season’s other villains as the clones we know and love became more and more entwined in Dyad’s plans. So instead of a story about several desperate women trying to survive, we have a story about a guy kissing a guy who is a genetic clone of his sister. Intriguing, but as is proven by the remainder of the season, essentially pointless.

In all likelihood, “Sleepy Hollow” is gearing up to kill Katrina during November sweeps, and “Reign” will bring Nostradamus back to the castle just in time for Francis to die young (we know he dies soon, just not how soon, because history). And “Orphan Black” has the Emmy-worthy performance of Tatiana Maslany to back up its questionable plot twists. But I encourage them all to embrace their darker sides. If you’re going to get all “Mad Men” about the relative weaknesses of people, you better back it up with some astounding character development. If you’re more interested in having a little fun, well, story conventions exist for a reason. No point deconstructing yourself into a pile of mush just because all the cool kids are doing it.