Why the "Duck Dynasty" musical will be a disaster: Broadway's weird attempts to expand its demographic appeal 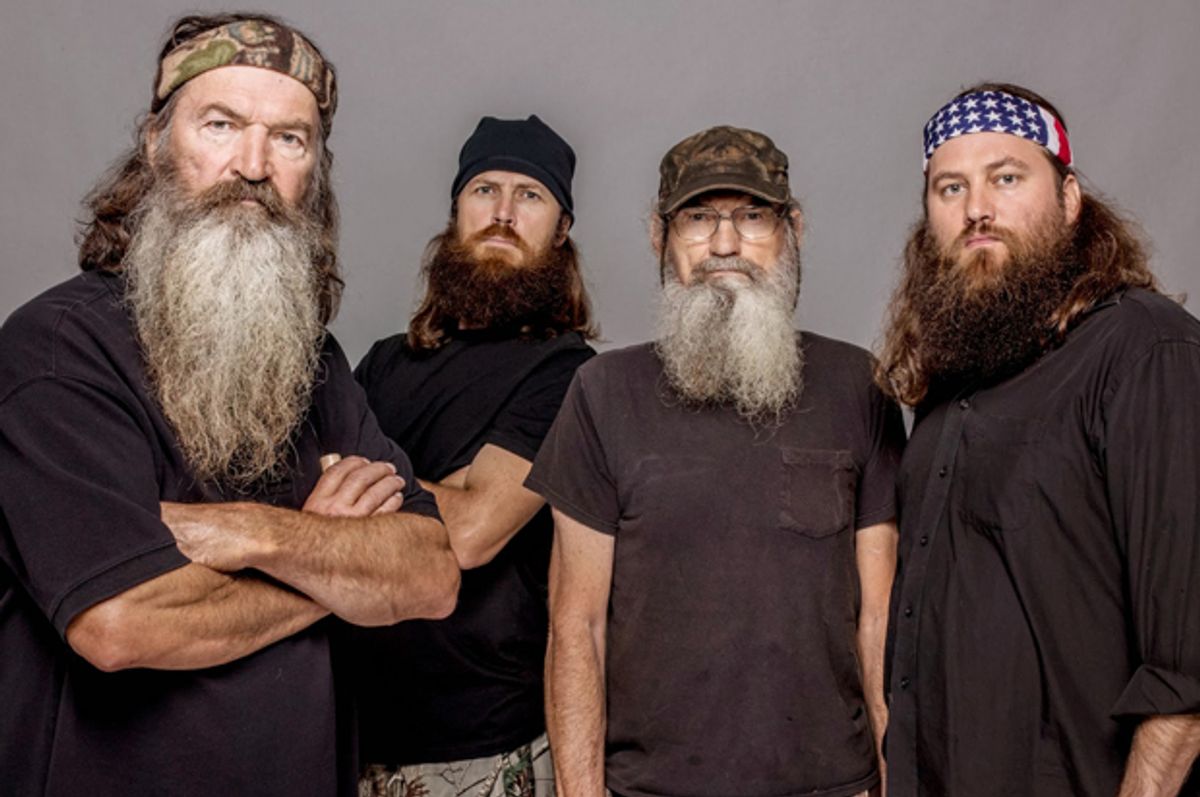 A Broadway musical development team is adapting A&E’s “Duck Dynasty” show into a big-stage musical. As the New York Times reports, “The Duck Commander Family Musical” aims for a February opening in Las Vegas. If a musical based on a reality show sounds like it would make a fabulous campy parody, similar to how “50 Shades! The Musical” skewers all that’s absurd about the erotic novels, too bad. The team insists the project is as sincere as they come, and not only because the Robertsons retain approval over the script. The producers think the brand appeal of the Robertson Dynasty will reel in men (straight men, if you read between the lines), an ever-elusive musical theater audience.

In Vegas, “Mamma Mia!” and “Jersey Boys” are the reigning hits. Producer Michael David, who was also part of the “Jersey Boys” team, hopes to strike gold again, telling the Times that “the success of ‘Jersey Boys’ convinced him that a show with a familiar brand that appeals strongly to men can do well in Las Vegas.”

It’s not apparent by the description of the show that it would appeal strongly to anyone, even die-hard fans. According to the New York Times, this is what Vegas audiences have to look forward to: “video of the real Robertsons and duck hunting, interspersed among family anecdotes and a 14-song score that mixes country, blues and show tunes.” This story-lite premise sounds like one of those licensed character live shows aimed at preschoolers, not a serious shot at a well-written musical. And this is what’s going to lure male audiences in Vegas, with all its delightful distractions, to musical theater?

It’s not that the male demographic unilaterally doesn't like musicals, but on Broadway, men are only 32 percent of the audience. Most of the big hits these days are marketed to women and kids. “Jersey Boys” seems to pitch itself as appealing to men and women alike because it mixes iconic pop hits with an intriguing tough-guy story. Producers keep thinking that all they need is the right brand, but serving up lackluster adaptations of beloved properties — as the recently shuttered “Rocky” musical, featuring music that critics dismissed as forgettable, shows — isn’t enough to trick anyone into having a good time. The show has to actually deliver an experience that’s different, even better in its own way, than the source material, like the inventive puppetry of “The Lion King.” Otherwise, why bother? Tourists can always catch a “Duck Dynasty” rerun in their hotel room before dinner.

It’s a shame they’re playing this one so straight, because if ever a situation cried out for self-conscious parody, it’s a crew of musical theater artists trying to figure out how to work a company-approved treatment of patriarch Phil’s public condemnation of gay people into a family-friendly script that isn’t completely disingenuous. According to the Times, both David and music director Jeff Calhoun were already signed on to the project when Phil’s eye-opening GQ profile was published last year, and now they’re figuring out how “to deal with the remarks by addressing them in the musical.” Not sure where that’s going to fit between the duck hunting videos and the family anecdotes (“remember that time Dad said gay sex was like bestiality?”) but with the family retaining script approval, it’s a safe bet that the treatment will be benign.

And that’s a missed opportunity. A more campy treatment, one that winks at the family’s carefully constructed image and place in the culture wars, could pull in a whole new and potentially lucrative audience — urbanites and liberals who wrote off “Duck Dynasty” as “not for me” when it first premiered. And it wouldn't necessarily alienate their base, either. Not that the Robertsons are hurting for it, but there’s precedent for turning sacred cows into serious musical theater cash: “The Book of Mormon.” The fact that an outrageous religious satire by the “South Park” creators is now selling out venues in the Bible Belt on its national tour proves that Americans kind of don’t mind laughing at themselves as long as the show is smart, funny and heartfelt, too. If the Robertsons wanted to show a whole other side of the family for their second act, audiences new and old — men included — just might follow.