The art of the Aaron Sorkin parody: A brief history of our obsession with spoofing Hollywood's most spoof-able writer 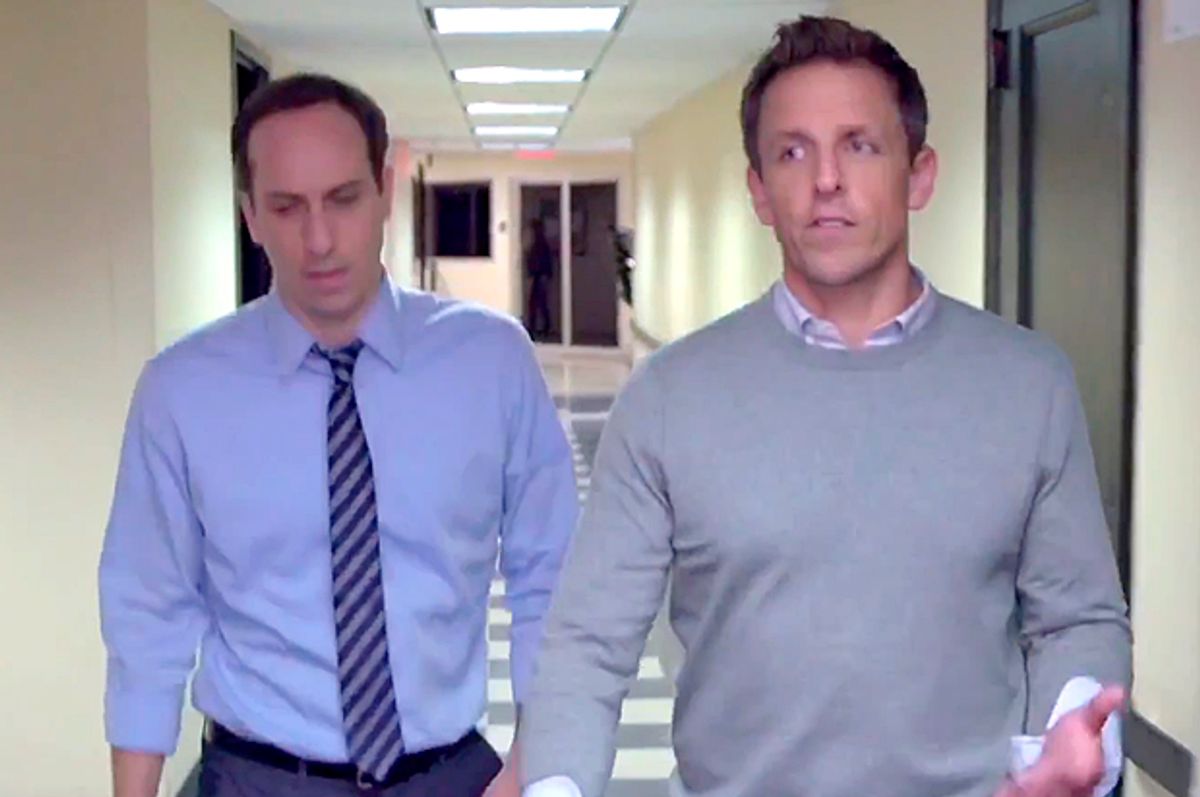 Last night on "Late Night With Seth Meyers," the Sorkin parody machine reached its self-referential apex, not just parodying these familiar tropes but also naming the tropes as they parodied them. The sketch certainly made us laugh, but it also gave us an excuse to reflect, fondly, on the many varieties of Sorkin parodies that have cropped up over the years.

Now join us, as we take a fast-paced walk down Sorkin-parody memory lane:

Ah, good old 2007. It was a simpler time: "Mad TV" was still (somewhat, sort of) relevant, Bush was midway through his second term, and Sorkin parodies consisted simply of people walking increasingly fast through hallways. Those were the days.

In 2001, Sorkin got busted at Burbank airport with a cache of drugs including marijuana, crack cocaine, and, bizarrely, magic mushrooms. The incident spawned "SNL"’s hilarious ‘West Wing on Mushrooms’ sketch, which envisioned “the episode written by Aaron Sorkin while high on mushrooms.” Unfortunately it’s not online, so you'll have to take our word for it. Or maybe we just hallucinated it. The early 2000s were a weird time.

Another ripped-from-the-headlines parody is “The Real West Wing,” again, from "Mad TV", which replaces the fictional West Wing gang with the real West Wing gang (well, actor versions of them), including Cheney, Condaleeza and Bush. It's funny because they're real people!

Sorkin’s characters are always doing significant things in very significant locations, but seeing the world of Sorkin transposed to a fast food restaurant, courtesy of Amy Schumer, is a perfect sendup of the glorious ridiculousness of life in the Sorkinverse. The presence of "Sports Night" star Josh Charles is reason enough to watch.

Hey, remember "Studio 60 on The Sunset Strip"? The ill-fated series was only on for one season before being canceled, which still proved long enough to spawn a parody of its own? Here is "Studio 69 on Van Nuys Boulevard," courtesy again of "Mad TV."

The parody that is really just a diss:

"Funny or Die" did this parody of Will McAvoy’s bombastic speech in the opening scene of "The Newsroom," but it was really less a parody than an excuse to tell Sorkin that his new show sucks. As actor Luke Barnett, in the McAvoy role, says: “There is absolutely zero evidence to support the statement that ‘The Newsroom’ is the greatest show on television. Sure, it was nominated for two Golden Globes, but that's kind of like winning a ‘Most Improved’ award in your 8th grade math class.” He continues: “They have a storyline based around the kid from ‘Slumdog Millionaire’ believing in Bigfoot, and it has the worst. Writing. For Women. Ever. Period.”

Authorized parodies can be funny, but as a rule, if Aaron Sorkin or the entire "West Wing" cast are featured in the parody, or if the parody takes place at the real White House and begins with Allison Janney saying “what an honor it is to be among such distinguished company,” it’s probably going to lose some of its edge.

Still, it’s always fun to get the old gang back together: