FBI's scary MLK deja vu: Why disgraceful history could be repeating itself

The FBI's newly released threat to Dr. King was horrific. Here's why you shouldn't assume it's an ancient relic 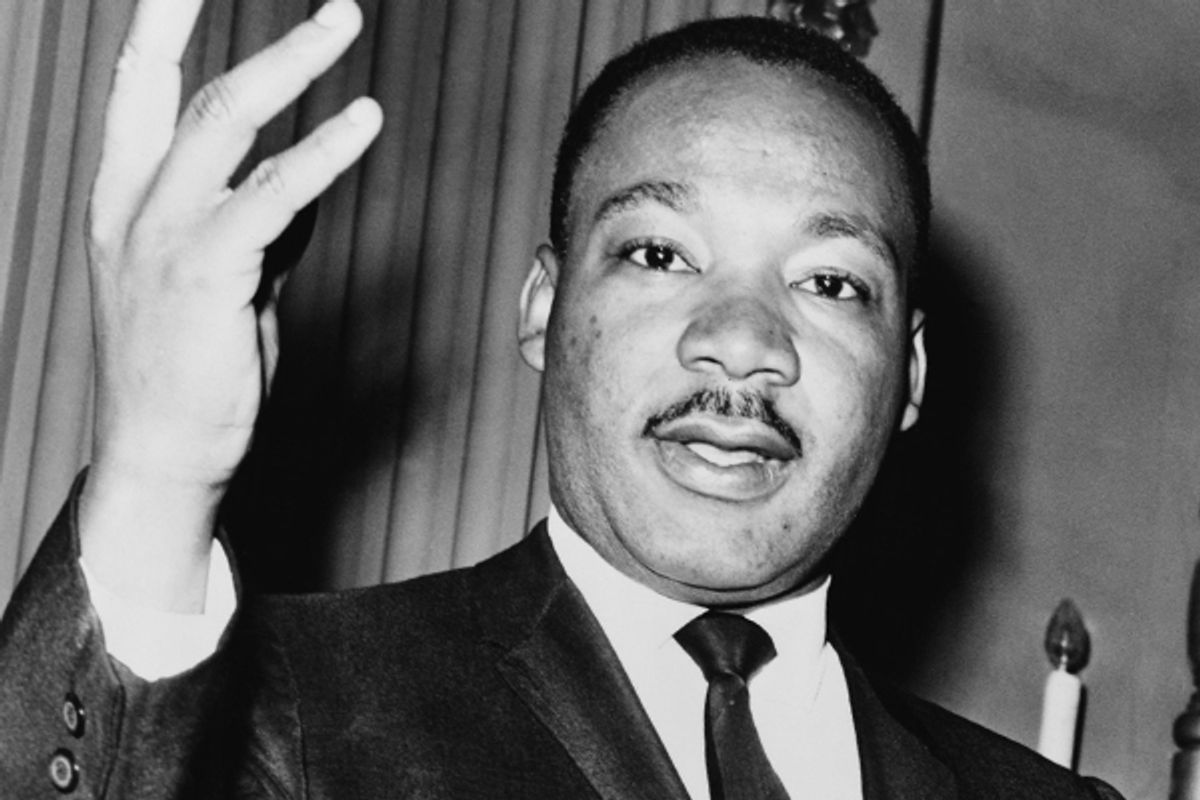 "In view of your low grade, abnormal personal behavior," the threatening letter from the FBI to the Rev. Dr. Martin Luther King Jr. begins, "I will not dignify your name with either a Mr. or a Reverend or a Dr."

Earlier this week, the New York Times published the full letter, for the first time in almost entirely unredacted form, nearly 50 years to the day after the FBI sent it to the civil rights leader. The newly revealed language threatens that vaguely described proof of King's sexual "filth" will be exposed. "You will find yourself and in all your dirt, filth, evil and moronic talk exposed on the record for all time ... You will find on the record for all time your filthy, dirty, evil companions, male and females giving expressions with you to your hideous abnormalities."

That didn't happen. As historian Beverly Gage explains in an accompanying article, in spite of FBI efforts to get the press to report on these claimed improprieties, no one did. J. Edgar Hoover's effort to discredit one of the most effective African-American civil rights leaders failed.

The letter provides yet another glimpse of the horrible lengths to which Hoover's FBI went to undermine legitimate dissent.

Hoover's obsession with Dr. King has become the measure against which all other surveillance abuse gets compared. FBI director James Comey even keeps a copy of Hoover's memo, approved by Robert Kennedy, authorizing the King wiretap on his desk as a reminder of the risks of abuse.

Which is why it is worth recalling -- especially amid the claims that nothing Snowden has revealed is as bad as big old bad spying under Hoover -- that our intelligence community is still using such tactics. Huffington Post reported a year ago on a National Security Agency report on tactics the government might use against "radicalizers." It recommended identifying the vulnerabilities of those "radicalizers," including "viewing sexually explicit material online or using sexually explicit persuasive language when communicating with inexperienced young girls." The report described the vulnerabilities of six people, some of whom are from the U.S. The report described the "online promiscuity" of two of them.

The entire point of the NSA report appears to be the same as the letter to King: an effort to undercut those who threaten the mainstream structure of power (though there's no evidence NSA is trying to get these "radicalizers" to commit suicide before they receive international peace prizes).

As the Electronic Frontier Foundation notes in a piece on King's letter, Britain's Government Communications Headquarters' Joint Threat Research and Intelligence Group also engages in such activities. On both sides of the Atlantic, English-speaking spies are culling data collected on the Internet to use sex to discredit perceived adversaries.

We have no idea whom the targets for such tactics are. We have no idea whether they are of the stature and importance of King -- or might attain his stature and importance -- though the Intercept profiled a number of Muslim, Arab or Iranian-Americans who have been targeted by NSA earlier this year. Several are high-profile civil rights leaders in their community, including Nihad Awad, the executive director of Council on American-Islamic Relations, the country's largest Muslim civil rights group, which has been targeted by the FBI.

Moreover, we have not yet mapped precisely how NSA collects get shared with the FBI, which has greater ability to harass leaders. We do know, however, that the renewed war in Iraq has led the FBI to start pressuring Muslim religious leaders to inform on members of their community again. We also know that the FBI gets some subset of all the NSA's wiretaps directly. The FBI searches that database of collected intercepts, even before it opens formal investigations, when it gets a tip on a person or wants to profile a potential informant. And the FBI keeps its data far longer than the NSA does -- 30 years in counterterrorism cases.

One thing we do know is that today's spies are more powerful than the FBI director targeting Martin Luther King Jr. Not in terms of political power; it's hard to beat Hoover's vice grip on politicians over a half-century. But in terms of how the technical capability to collect on many people at once has grown by bounds, the NSA has Hoover beat. Moreover, people spend a lot more of their lives online. It's a lot easier for the NSA to spy on targets' online activities -- to collect "proof" of their "online promiscuity" --  than it was for Hoover to record events transpiring in King's hotel rooms.

It may take a half-century, as it has with King, to see the fruits of the surveillance the NSA and FBI direct at leaders of groups perceived to be a threat, whether it be Muslims fighting to defend their legal rights or overseas preachers criticizing American expansion. But we should be vigilant in insisting that the tactics used with King have no place in this day and age.