Fox revs up impeachment lunacy, with Krauthammer at the wheel 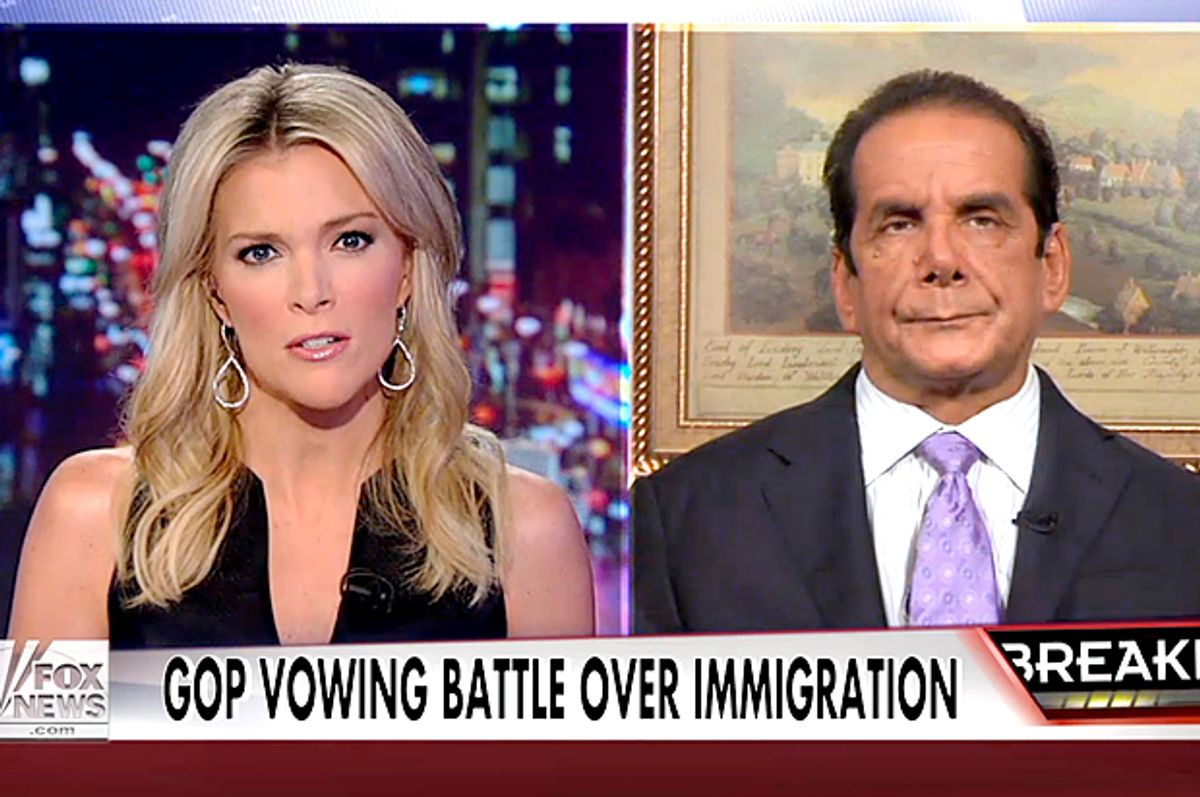 And so it begins, again. "I believe this is an impeachable offense," Charles Krauthammer told Fox host Megyn Kelly Thursday night, discussing President Obama’s planned executive action on illegal immigration. “It is very clear that what he’s doing now […] is a flagrant assault on the Constitution, on the separation of powers."

Impeachment carnival barker Andrew McCarthy jumped on Twitter with Krauthammer’s pronouncement. So did the excitable and feeble-minded folks at Breitbart. GOP Congress members are likely to follow.

Of course you’ll recall that, back in July, it was Krauthammer who claimed talk of the president’s possible impeachment was “a concoction of Democrats,” as he denied any serious Republicans were interested in such a move. "They know that in 1998 the party was saved, the sixth year of an administration, it was saved by impeachment, overreaching on impeachment by Republicans, and this is a good issue, it’s a good way to raise money," he said then.

Now he’s telling Kelly, one of Fox’s most reliable impeachment trolls, that Obama is about to commit “an impeachable offense.”

It was Kelly, back in January, who asked then-Senate Minority Leader Mitch McConnell if he would consider impeaching the president. (McConnell ducked the question.) Late in the summer, though, top Republicans put out the word that impeachment was an overreach likely to rev up the Democratic base and cost the party its coming midterm landslide, so she settled down.

But Kelly brought the charge back election eve, suggesting that any Obama executive action deferring deportation might be designed to “offend” Republicans into impeaching him. Those poor impetuous creatures are slaves to emotion, the Fox host seemed to suggest, and can’t be blamed if they’re baited into political overreach by our amoral, conniving president.

In fact, Kelly's doing the baiting herself. On Wednesday she asked Sen. Jeff Sessions if he thought Obama’s coming immigration move was an “impeachable offense.” He said he thought Republicans had enough “tools” to push back – and as new chairman of the Senate Budget Committee, he suggested he’d look at defunding the Justice Department or other agencies if Obama moved.

Interestingly, on Thursday night, in the same segment where he branded executive action “an impeachable offense,” Krauthammer warned Republicans not to use the budget to shut down the government -- just one day after Sessions told Kelly he’d consider using his new budgetary powers to stop such a move. So he’s trying to restrain newly empowered Republicans at the same time he’s riling them up?

To be fair, back when he blamed Democrats for the impeachment talk, Krauthammer also told Bret Baier that any executive action on immigration would indeed be “an impeachable offense” – but one that he would be “100 percent against.” Krauthammer may still oppose impeachment, too, as political overreach that will damage his party.

And yet Thursday night he threw kindling on a fire that had seemed to burn itself out. Will he get away again with claiming this was all the Democrats’ idea? Probably. Fox will play both sides of the fence as long as it entertains its Obama-hating audience. Krauthammer will try to steer the impeachment clown car, but he may find it takes him over a cliff.