With a whole new class of hawks recently elected, here's why their colleagues are maniacally licking their chops 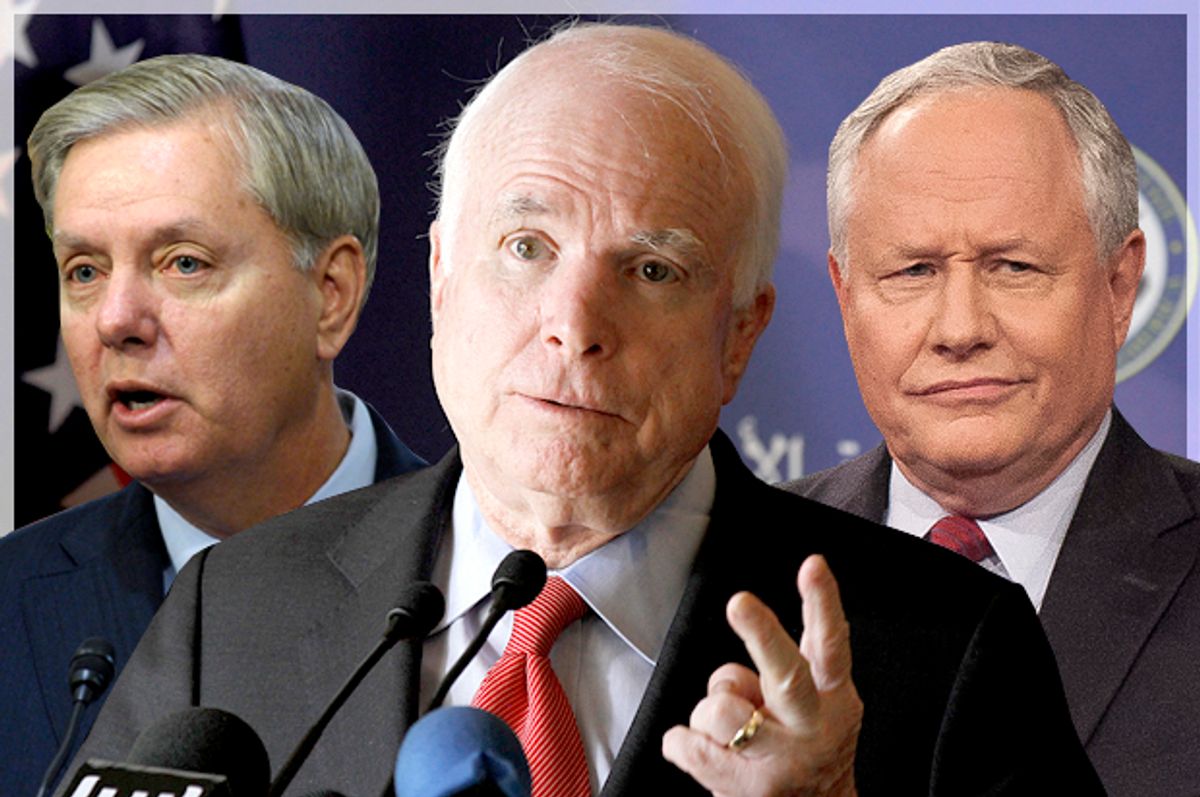 "Each candidate on the Republican side embraced a bold foreign policy. They rejected leading from behind. So, from my point of view, the Republican conference is going to be made up of more traditional national security Republicans, and this era of flirting with isolationism, I think, has passed."

As Dave Weigel at Bloomberg quipped, "If that was too subtle, Graham found a better way of putting it when he talked to Washington Post reporter-blogger Jennifer Rubin: 'The cavalry is coming over the hill'." You know we're about to see a full-fledged, flag-waving, chest-thumping call to arms from the war hawks when they start seeing themselves as Teddy Roosevelt charging up San Juan Hill. Sen. Graham, of course, never went up any hill unless an office building or courthouse sat on top of it. Not that there's anything wrong with that. The military needs lawyers too. But it's always fun to watch the hawks get themselves so worked up they start sounding like George C. Scott's monologue at the opening of "Patton," Graham especially.

His sentiments could have been applied generally to the resurgent neocon influence in the GOP, which should have been obvious to anyone who watched the ads and the talk coming from Republican Senate candidates in this recent election campaign. But in this case he was specifically talking about their intention to derail any hope of an agreement with Iran. This is because, as anyone who's followed them over the years knows, they have long believed that while anyone could go to Baghdad, "Real Men go to Tehran." And let's be clear: They don't want to go there to sip tea and sign any damned agreements, no sirree.

You may recall that back in the beginning of the year, 15 Democratic senators, led by New Jersey Sen. Bob Menendez, along with all but two Republicans tried to do an end run around the president by pushing a bill to impose stricter sanctions on Iran just as the administration was making headway on an agreement. The White House was understandably aghast. Even if the president vetoed such a bill, the mere fact that the Senate would bring it to the floor would likely sabotage the talks. The Democrats successfully held them back, but it was a close thing. There was even some thought for a while that the  Real Men had 67 votes, enough to override a veto. Harry Reid and the Democrats managed to keep it from the floor and the administration continued with the talks.

This Thursday, the Republicans tried once again to pass a sanctions bill and failed. They are pushing it again now because a Nov. 24 deadline may have to be extended and that's the last thing they want. Sen. Chris Murphy shut it down by objecting to their call for unanimous consent to bring it to the floor and by stating the obvious: "It would send a message that Congress does not stand with the president as the negotiations continue." Indeed.

This was a disappointment to the Real Men caucus. As this Reuters article put it:

Many members of Congress - mostly Republicans, but also some Democrats - worry that the Obama administration will go easy on Iran in order to reach an agreement the president could cite as a significant foreign policy achievement.

We wouldn't want that. Graham isn't too depressed about it, however. As he made clear to to Jennifer Rubin, now that the Republicans have begun their new thousand-year reign, they will never give up on making sure that Iran remains an intractable enemy of the United States. After all, Rand Paul is now out there all alone singing old show tunes with the ghost of Robert Taft while a whole group of true-blue, flag-waving patriotic national security hawks just got elected to the Senate in place of Democratic squishes. Graham's positively giddy. As Weigel notes:

And if history is any guide, as well as what we've seen just this week, there will be plenty of Democrats elbowing each other aside to vote with the Republicans on this. (It appears that the one thing they've learned from this election is that they were not servile enough toward Republicans.)

The election of these new, more hawkish senators does not just portend a new roadblock on Iran, they present a challenge on national security and foreign policy across the board. Take, for instance, the "crown jewel" of the freshman class, Iowa's Joni Ernst who ran as a "boots on the ground" veteran highly critical of the president's foreign policy, even exhorting him to leave all important decisions to the military since he clearly is incapable of leading. And it's fair to assume that Sen. Graham will have a strong ally in Sen.-elect Tom Cotton of Arkansas who memorably said this during a town hall meeting just a month before the election:

“We now know that it’s a security problem. Groups like the Islamic State collaborate with drug cartels in Mexico who have clearly shown they’re willing to expand outside the drug trade into human trafficking and potentially even terrorism. They could infiltrate our defenseless border and attack us right here in places like Arkansas.”

These new senators may have crazy ideas about "Agenda 21," "personhood" and ISIS drug runners invading Little Rock, but like most Tea Partyers, their alleged "isolationism" is a figment of the wishful imaginations of Beltway wags and Rand Paul fans. They are Republicans who, by definition, have been hawks for decades now. And they are thrilled to have put enough distance between themselves and the debacle of the Bush years that they can start banging the war drums again.

They were unable to destroy the Iran talks this week but one can expect they'll do it as soon as the new Congress is sworn in. They have a long list of things they want to accomplish, but advancing the cause of peace isn't on it.