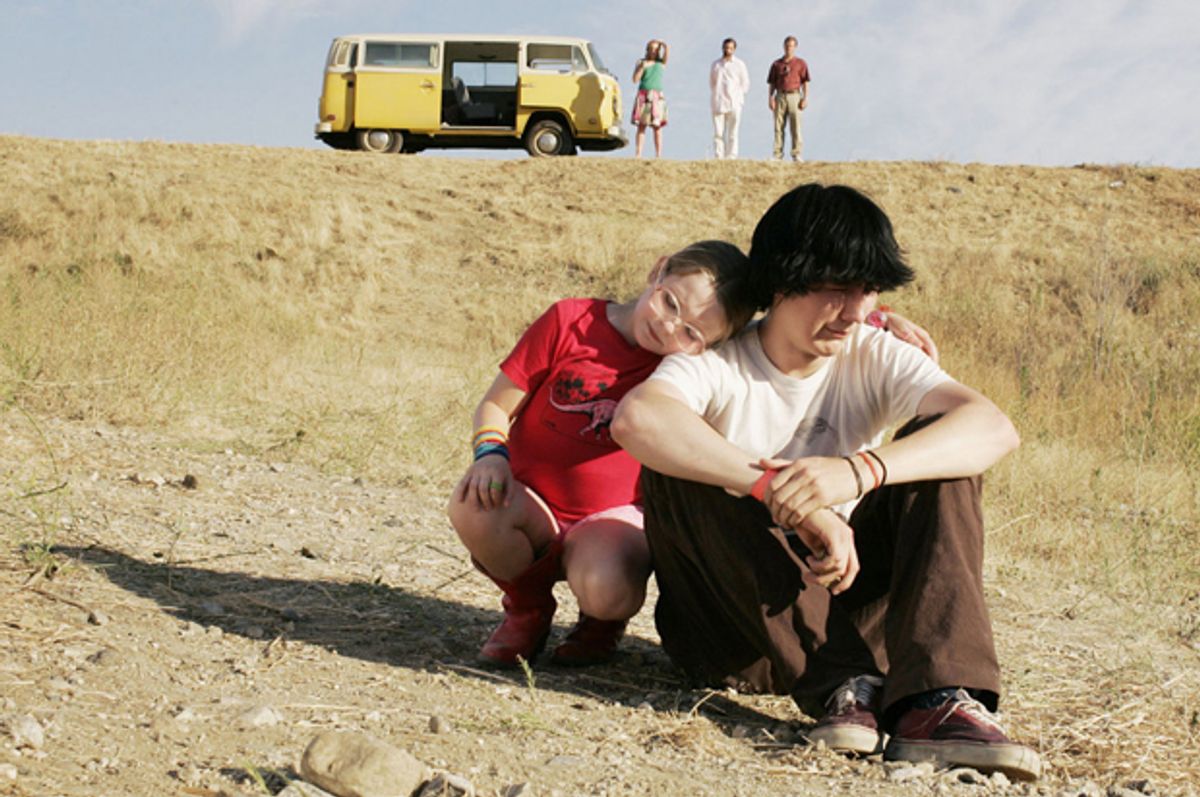 "Force Majeure," currently in theaters, is the latest vacation-from-hell film. When Tomas (Johannes Kuhnke) momentarily abandons his family during an avalanche at a French ski resort, the incident snowballs into a series of discomfiting sequences. Tomas’ wife Ebba (Lisa Loven Kongsli) scolds him at every opportunity, and his kids Vera and Harry (Clara and Vincent Wettergren) worry that their parents are headed toward divorce. Other situations develop. Relaxing, it is not.

Movies love bad family vacations. There's something about the chaos of colliding personalities, the carload of cranky humans who are all a little too comfortable with each other, and the linear narrative of the road trip that make great cinematic fodder. For instance:

Like "Force Majeure," Julia Loktev’s film involves a character making a split-second decision that turns out to be the absolutely, completely wrong one. Nica (Hani Furstenberg) and Alex (Gael García Bernal) are engaged, and they decide to go backpacking through the Caucasus before their wedding. They are having a fine time until a man with a gun confronts them. Alex reacts, well, rather badly. Suddenly there is an awkward, mountainous gulf between the lovers in the mountain region. What is more disturbing is that they don’t speak about the incident. Audiences share the “pleasure” of experiencing their discomfort as well.

"The Comfort of Strangers"

Mary (Natasha Richardson) and Colin (Rupert Everett) decide to rekindle their stagnant marriage by traveling to Venice. Didn’t they see "Don’t Look Now"? The gorgeous couple meets two eccentrics, Robert (Christopher Walken) and Caroline (Helen Mirren), who appear friendly but are in fact quite fiendish. "The Comfort of Strangers" pivots on Mary and Colin getting lost — both literally and figuratively. Paul Schrader’s film boasts a quartet of strong performances, and some delicious Harold Pinter dialogue (adapted from Ian McEwan’s novel). But it’s the deliciously nasty behavior by Robert and Caroline — don’t drink that tea! — that makes this bad trip is so good.

French filmmaker George Sluizer made "The Vanishing," an extremely disturbing thriller, in 1988 in the Netherlands. Five years later, he (poorly) remade the film in the U.S. The story concerns a couple on vacation who get separated at a service station. The man eventually realizes that his girlfriend has been abducted. Years later the man is contacted by the criminal, who leads him to discover what happened. Suffice it to say, he should not have let his curiosity get the best of him. But how can he resist? The original version of "The Vanishing" is taut and terrific, a nervy psychological thriller that features a spectacularly bad ending. The remake, which tweaks the corker of a finale, is just spectacularly bad.

Joanna Hogg’s films depict miserable families on miserable vacations. In "Unrelated," Anna (Kathryn Worth) visits her friend Verena (Mary Roscoe) and her family in Tuscany, only to spend more time with Verena’s adult son Oakley (Tom Hiddleston) than her friend. Moreover, Anna upsets an already chilly family situation after a mishap with a car gets Oakley in some trouble. In "Archipelago," a British family on holiday navigates the fragile terrain of its unhappy characters who not-so-quietly can’t stand one another. Hogg’s films are as fascinating as they are unsettling — especially when her characters overhear their friends and family members being soundly upbraided for their bad behavior.

The late Harold Ramis directed this popular comedy about the Griswold family’s cross-country trip to Walley World. It’s a broad farce in which everything that can go wrong goes worse. Yes, the film plays on stereotypes when the family travels in to a bad neighborhood in St. Louis, or visits trailer trash cousin Eddie (Randy Quaid), but "National Lampoon’s Vacation" has some very funny moments involving Aunt Edna (Imogene Coca) and Lasky, the guard at Walley World (John Candy). Three sequels followed: "European Vacation," "Christmas Vacation," and "Vegas Vacation." And writer John Hughes made yet another bad-trip film in "Planes, Trains, and Automobiles."

It’s positively cringe-inducing to spend 103 minutes on this family vacation in Disneyland, where the film — luridly shot on the sly in black and white — was made without the park’s permission. Dad Jim White (Roy Abramsohn) ignores and/or mistreats his wife and children so he can sidle up to the pair of French teenage girls he has been ogling. That Jim gets caught up in a hallucinatory nightmare perhaps serves him right, but for viewers, "Escape from Tomorrow" is about as pleasurable as having that earworm “It’s a Small World” stuck in one’s head for days on end.

Less a vacation than a dysfunctional family road trip, this Oscar-winning comedy packs the Hoovers — optimistic dad (Greg Kinnear), weary mom (Toni Collette), silent son (Paul Dano), gay uncle (Steve Carell) and bawdy grandpa (Alan Arkin) — into the minivan to take the youngest, Olive (Abigail Breslin) to compete in the Little Miss Sunshine beauty pageant. As the Hoover’s misfortunes grow worse, the comedy gets richer as the family reaches not just their destination but some true insights about their lives, dreams and reality. "Little Miss Sunshine" is an offbeat crowd-pleaser that is all about letting one’s freak flag fly.

In this caustically funny family outing, Eliza (Hope Davis) enlists her family to track down her errant husband, Louis (Stanley Tucci) after discovering a letter that suggests he is having an affair. Packing Mom (Anne Meara), Dad (Pat McNamara), Sis (Parker Posey) and her boyfriend (Liev Schreiber) into the family car, these neurotic New Yorkers reveal their anxieties and insecurites, get on each others’ nerves, and experience various revelations that force them to recalibrate their lives. Sensitive and often very funny, "The Daytrippers" is a good bad outing.

Divorced dad Alberto (Néstor Guzzini) takes his kids Lucía (Malú Chouza), a teenager, and Federico (Joaquín Castiglioni) her irritating younger brother, on a vacation to a Uruguayan hot springs. However, the family encounters endless rain in this absorbing comedy-drama. The film captures their boredom quite brilliantly; the film becomes a confined character study of the parent/child relationship as Lucía sneaks out to be with a boy she is crushed on since she can’t connect with her ever-present father. "Tanta Agua" doesn’t turn out terribly for the characters, but their lousy vacation is memorable for viewers.

Catherine Breillat’s gleefully nasty film depicts a family on a decidedly life-changing summer vacation. Elena (Roxane Mesquida) is a sexually curious teenage beauty who is deflowered by Fernando (Libero De Rienzo), a handsome Italian, in a sexually graphic scene as her heavyset sister Anais (Anais Reboux) tries to sleep in the same room. "Fat Girl" eventually shifts gears to an equally intense sequence in which Mom (Arsinée Khanjian) is determined to drive the girls home. To say anything more — other than that Breillat doesn’t hold back when it comes to sex or violence — would ruin this squirm-inducing film.

Jim Abrahams, David and Jerry Zucker brothers’ classic comedy is full of side-splitting sight gags, quotable one-liners (“Don’t call me Shirley!”) and fun cameos. "Airplane!" is a zany bad trip where passengers should steer clear of Captain Oveur’s (Peter Graves) overtures, and definitely shouldn’t eat the fish. Spoofing all the "Airport" disaster films, this is funnier than the unintentionally hilarious "Airport ’79: The Concorde," and even more ridiculous than the recent bad plane ride that was "Snakes on a Plane."