Reality TV is not the "new blackface": How reality shows became some of our most useful explorations of race in America 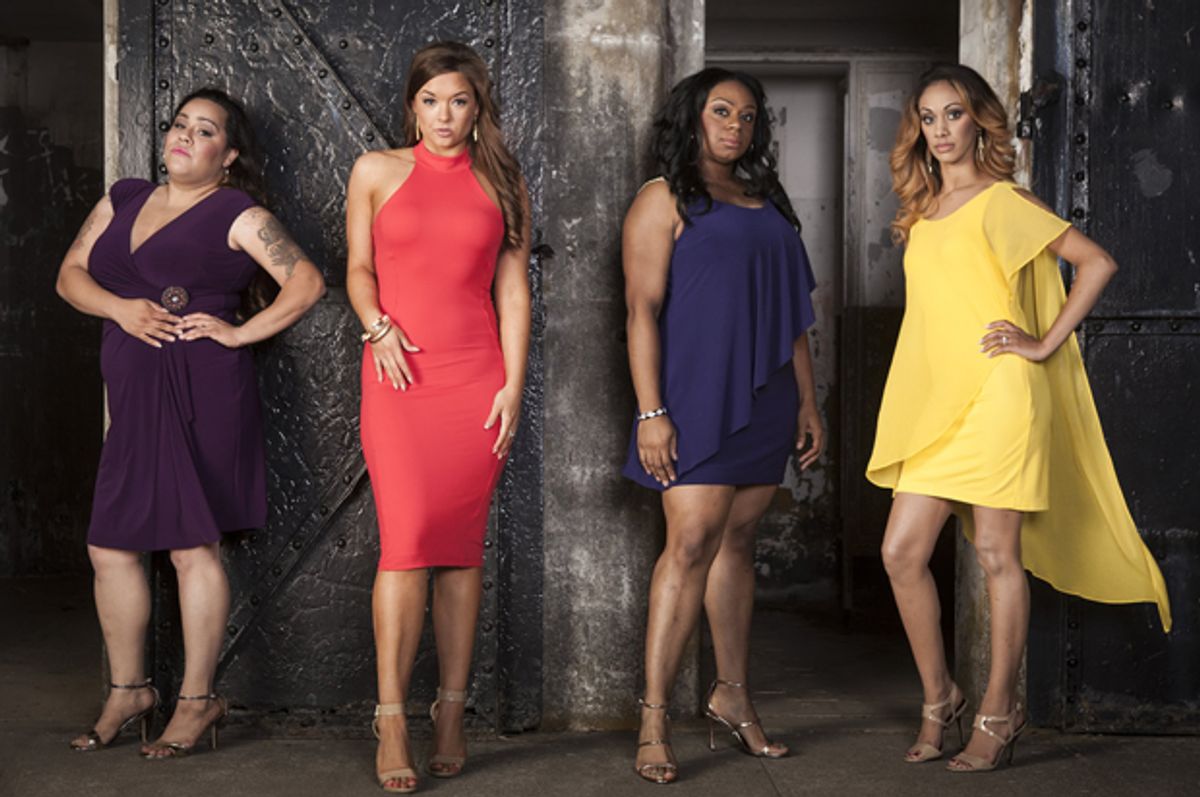 Earlier this week Vulture published an excerpt from Justin Simien’s book “Dear White People” — a tie-in to his film of the same name — with what might be the most provocative Internet headline I’ve ever seen, and I've seen a lot: “Reality TV Is the New Blackface.” For context, Simien’s film “Dear White People” focuses on a group of students at a fictional Ivy League university when a house on campus throws an “Unleash Your Inner Negro” party. In addition to a lot of troubling ideas of what it means to be “Negro,” dozens of white students show up in blackface and wigs. The film opens up with the news that this party has occurred, and then dials back the clock five weeks to watch how it all went down the way it did. When the party finally happens (again), in the final act of the film, Simien’s script and his actors have relayed so much emotional complexity around the subject of race on campus that seeing white students in blackface is a literally painful experience (if it wasn’t already). And that’s how Simien makes his point — by letting the audience feel it fully, themselves. The film is extraordinarily unbiased, except toward compassion for its characters; even the instigators of the party have their moments of trying to be understood.

Reality television is a concern of Simien’s in his film, too, personified in Colandrea Conners, who shortens her name to “Coco” to sound less “hood.” One of the first scenes of “Dear White People” is Coco auditioning for a reality TV show filming on campus and being turned down for not being interesting enough. It’s heavily implied that if she were to be more provocatively “black” — whatever that means — she’d be more likely to get “noticed” — whatever that means. It’s Coco’s first step on a journey that becomes about learning to massage your identity to best advantage, even as she is one of the black students uninterested in activism on campus, what she terms “blaming” white people for their problems, and even dating black men. As portrayed by the wonderful Teyonah Parris (who plays the part of Dawn on “Mad Men”) Coco’s story is a tragic little sideshow that contains a lot of the pain and uncomfortable truths of “Dear White People.”

It’s this particular dynamic that Simien discusses in the Vulture excerpt. Like the tone of “Dear White People” itself, Simien is tongue-in-cheek and self-indicting. “Stereotypes from the slack-jawed, no-good black male to the sexually promiscuous, foul-mouthed black woman are so ubiquitous, groups of people in the country assume that this is how all black people really behave. Now the confused, shuffling Mammies and flamboyant, vapid Zip Coons of yesteryear are actually real people, competing for Donald Trump’s affection and/or that of each other’s man.” He specifically calls out “Real Housewives of Atlanta” breakout star Nene Leakes (whose shortened name sounds a lot like his character Coco’s) and former “Apprentice” contestant Omarosa for having a type of notoriety among audiences that undercuts black racial identity, arguing that they “validat[e] the worst stereotypes of black folks for people whose contact with actual black people is limited. And boy, are they fun!”

Where the bulk of “Dear White People” is about processing the reality of white people appropriating blackness, this essay, and the film subplot around Coco, are about something a lot more complicated: the complicity of black people in the perception of blackness. And though that is something I have no personal experience with, I happen to have watched a lot of reality television. I’m not sure I’m entirely on board with Simien’s interpretation of reality TV as the new blackface, especially when the old blackface seems to be still alive and kicking. But I do see that blackness has become a commodity that people of all races use to survive, whether that’s by exploiting it or appropriating it or performing it. And the biggest space for that on television is in reality television.

That fact — that racial tensions and identities are so on display in the world of unscripted programming — is in reality television’s favor; it might be a tense space, but it’s the most diverse subgenre of television out there. Simien’s point in critiquing racial representation on reality TV is that these groups aren’t well represented anywhere else — “The Olivia Pope character on ‘Scandal’ simply cannot wash away the impressions of all the shucking and jiving happening between black people on reality TV.” But at the same time, reality television contains multitudes, and Simien himself confesses to watching a great deal of it. A show like “Say Yes to the Dress” has a very different relationship to its black “characters” than a show like “Real Housewives of Atlanta” — largely because those two shows cast very differently. (The former is looking for a memorable personality; the latter is looking for an interesting family situation that could end with some kind of heartwarming flourish.) Add in shows like “Black Ink” on VH1 or “RuPaul’s Drag Race” on Logo and this idea of what it means for black people to be overrepresented on reality television becomes very difficult to pinpoint; it means many different things.

For example, I’m struck by the acute power of Simien’s argument as it relates to Lifetime’s “Girlfriend Intervention,” a show that finished its short first-season run in October. “Girlfriend Intervention” caused a mild furor when it came out, and I think the general read was that it was incredibly problematic, if at times difficult to pinpoint exactly why. The four black women that acted as the show’s makeover artists embodied every possible stereotype about black women while listing questionable aphorisms about the differences between white and black women. It’s a mutual love fest of disturbingly reductive assumptions, helmed by the show’s “soul coach,” Tanisha Thomas, who has made her career around being what media thinks of as the sassy black woman. “Girlfriend Intervention” is offensive — but to whom? The white women who want to be like black women? The black women who have chosen to star in the show? If a bunch of consenting adults agree to do a thing because of money, it becomes harder to locate where the problem is.

This is explored in depth by the most obvious critical doppelganger to “Dear White People” — Spike Lee’s film “Bamboozled,” from 2000, which ends up being about a variety show where two black performers take on blackface and caricature black stereotypes. This thing has levels. It’s the squaring-the-circle of this whole debate. And naturally, while the minstrel show is introduced as a joke by a disaffected (black) TV producer, (white) audiences love it. “Girlfriend Intervention” is a type of minstrelsy, no doubt. But “Bamboozled” asks, pessimistically, what isn’t minstrelsy, in this biased, unjust system?

Meanwhile, Lifetime is apparently bent on cornering the market on problematic television; it’s currently airing the first season of a new show called “Prison Wives Club,” which, as the title suggests, is about women whose husbands are in prison. As with most reality shows, it’s really about petty drama among a small group of women, but it’s hard to not see race in the show — not when the incarcerated population is disproportionately black and Latino, as is the cast of the show. (The one white woman, Kate, has a bio that goes out of its way to indicate that she has a fondness for “bad boys.” This information does not appear in the other three women’s profiles.)

Unlike the glitz of “Girlfriend Intervention,” “Prison Wives Club” is just sad. It’s dreary and lonely and sort of questionable the whole time, and that makes perfect sense, because it is a show about women whose husbands are in prison. Two are married to men who end up in prison for assault; they have some sort of conjugal visitation rights. The other two are married to convicted murderers whom they only began dating while the inmates were already serving time. Both are looking at a solid decade or two before release. Neither has consummated their marriage, either, as Washington state law imposes a three-year waiting period on newlywed inmates.

You have to wonder what’s going on in these people’s heads. The show doesn’t do a great job of drawing the women out, but it’s had success with Jhemini, the most self-conscious of the wives, who is keeping her husband’s incarceration a secret from her family and trying to start a modeling career while convincing her husband that she’s not cheating on him. Both Ana and LaQuisha came into their relationships knowing that they would be prison wives; Kate doesn’t seem to have enough depth of feeling to care much about her situation. Jhemini is the only one who seems appropriately messed up about the whole thing, which makes her one of the more annoying characters on the show, actually, as she’s usually sad and anxious, while the other girls organize a trip to a strip club (seriously).

But her experience, in whatever limited capacity I could understand it, reminded me of Coco’s in “Dear White People.” Here is a lot of pain, borne out of a lot of wanting, and if both women are settling for playing a role, for performing minstrelsy, they both seem to be doing it out of desperation. Money, certainly — “Prison Wives Club” is uniquely open about poverty, observing that the women will be the only ones earning reliably, as ex-cons have trouble with employment. Jhemini refuses to be listed on a resource site for prison wives because she doesn’t want people to know she’s married to an inmate, but she has a camera crew following her around. There is an unspoken imperative here.

And maybe it’s just to be heard, to be seen, to be noticed. Jhemini wants to be a model — of course she does; what other profession is so purely about external validation? If the other option is nothingness, minstrelsy begins to sound like a totally reasonable path to survival, which, to be frank, is why it exists in the first place.