The siren song of the scumbag: Why smart women can't resist terrible men

Critic Laura Kipnis investigates her own strange fondness for a rogue's gallery of liars, cheats and exhibitionists 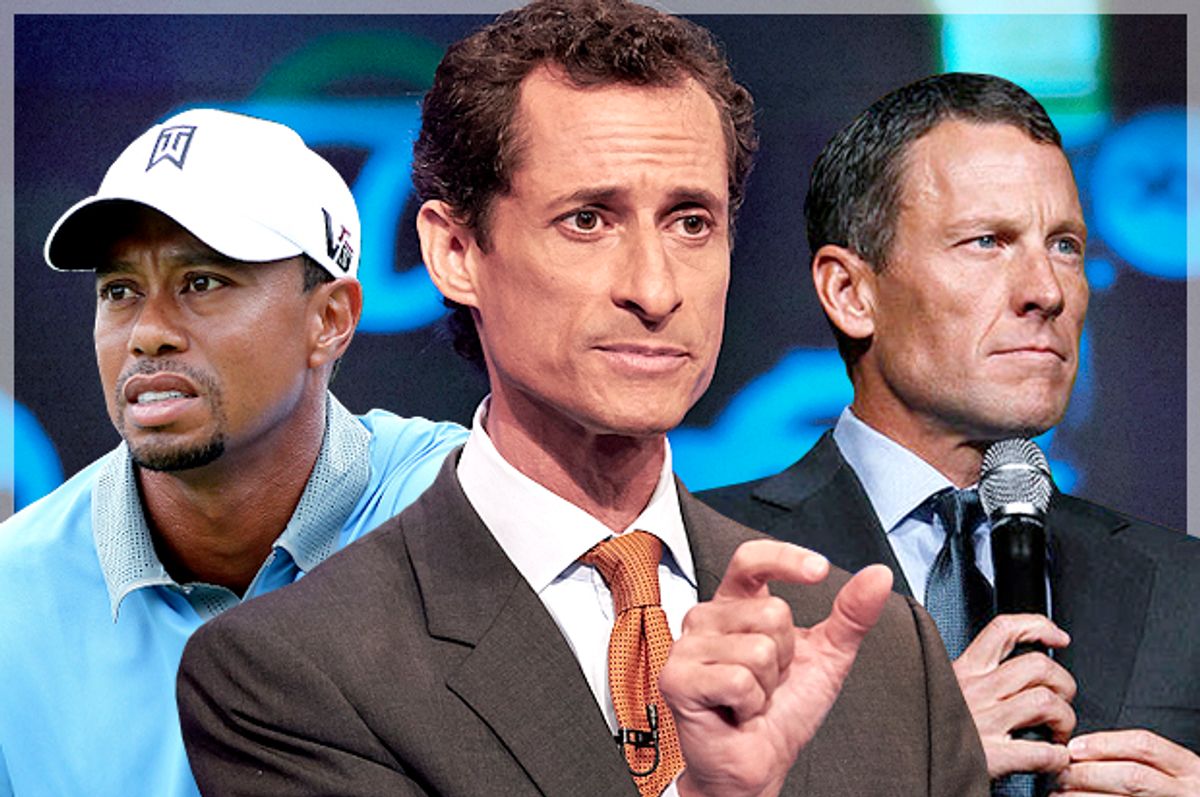 These are times to try the weary feminist reader's patience, when the conversation seems dominated by absolutist 23-year-olds still burning off the righteous indignation of their first women's studies courses. It's a cultural moment that begs for a worldly, ambiguity-friendly thinker like Laura Kipnis, an academic herself, but in film studies, and therefore less a promulgator of wishful thinking than an expert on the things we enjoy when we really ought to know better. In her latest collection of essays, "Men: Notes From an Ongoing Investigation," Kipnis explores her fondness for, fascination with and (very) occasional attraction to the less savory members of that gender. Her book, she confesses -- in what will be a long series of shamefaced admittances -- "is full of disreputable characters: unruly, often a little morally shady."

Kipnis' penchant for bad men stops short of the downright wicked: There are no rapists or murderers examined here, no violent criminals. Instead, Kipnis "investigates" a rogue's gallery of pornographers, adulterers, con men, philanderers, liars, exhibitionists and authors of ludicrously paranoid tracts on the subject of Hillary Clinton. She finds most of them at least somewhat amusing, but she also views them as acting out in bolder ways some of her own least palatable impulses and traits. She describes herself in her preface as being fascinated by "the poetics of masculine panic" in "a voyeuristic, overly avid way." Let that serve as notice that there will be a minimum of high roading in the chapters to come.

Kipnis has written three earlier books for general audiences: a self-described "polemic" on monogamy ("Against Love",) another on feminism ("The Female Thing"), and "How to Become a Scandal," about just that. She is a swashbuckling stylist, with a knack for nailing the essence of a remark by means of a canny metaphor; Hemingway, she observes, is "a writer whose every sentence was scaffolded by such masculine angst he'd be a flattened heap without it; self-irony would be tantamount to yanking out his own vertebrae."

Whereas self-irony is Kipnis' calling card. She advances no line on men per se, thank god: "A dearth of sweeping theories about the differences between the sexes will be found in the pages ahead," she writes at the outset. Kipnis is, more or less, a Freudian, which at various points in history has been more or less welcome. At present, in an intellectual climate of adamant, reductive certainty, her nose for contradictory desires and hidden meanings feels refreshing. What authority Freudianism retains amounts to little more than a few scraps and wisps to clutch to its nakedness, so psychoanalysis' propensity toward bullying ("I know what you think and feel better than you do yourself," Freud was fond of explaining to his unfortunate patients) has become less alarming.

Freudianism arose from a particular form of denial, specifically a late-Victorian bourgeoise insistence on propriety and decorum that (as Freud saw it) genteelly papered over a roiling core of forbidden desires and aggressions. There are very few contemporary milieus where the same standards obtain, but politics is one of them. Kipnis on Anthony Weiner, for example, is piquant. As she sees it, the former congressman was not the casualty of his own hubris, a man who believed that his stature permitted him to get away with sexting young women. Rather, he always secretly wanted the world to look at photos of his body, and furthermore on some level he must enjoy the ensuing humiliation. He is one of those "people who arrange for us to catch them doing shameable things, especially if you think, as I can't help thinking, that Weiner sent that photo to us; the college student [who was its initial recipient] was just an intermediary."

In another chapter, Kipnis recounts a public appearance she did with Harvey Mansfield, a "neocon hero" and author of a book about the perils of feminism called "Manliness." Kipnis derives much entertainment from her own bafflement at Mansfield's unfailingly "courtly" comportment and his complete inability to mount even a feeble intellectual defense of a book that sounds like a heap of nostalgic piffle. (Kipnis was only one in a series of left-leaning critics to make mincemeat of Mansfield's arguments.) "There are certain men who just like getting women mad at them, for reasons that are open to speculation," she writes. She imagines herself as a dominatrix, obliged by the theater of their "debate" to publicly flog him, with the insinuation that this is what Mansfield desired all along: "It wasn't entirely clear to me, once I met him, that Mansfield himself took his ideas that seriously: he meant them as a provocation, obviously, but also, I started think, as flirtation."

If Kipnis finds erotics where others see merely politics, she is also on the alert for the ulterior motives in sexual relations that are purportedly motivated only by pleasure and/or love. Her consideration of the Tiger Woods scandals is less about Woods than the woman he chose to marry and the 100-plus others he chose to fool around with on the side. As with Weiner, she wonders if Woods wanted to be exposed, because how could the athlete not grasp that "the fans and admirers most drawn to these high-wattage hookups appear to be the same cohort most inclined to sell you out later." This leads to a consideration of the groupie mind-set in an age of blossoming media outlets -- so many options for disgruntled ex-spouses and lovers who want to go public with their grievances when their bedroom brush with fame doesn't provide them with the ego boost they crave.

Kipnis herself admits to being drawn to a man who, for some reason, was drawn to women inclined to write about him afterward. In a chapter titled "The Lothario," she recounts reading a novel based on the author's relationship to a guy Kipnis had also dated. At one point, this male character crooks his finger at the heroine and says, "Come here," a passage that, Kipnis writes, had "an awfully familiar ring. Back when I was on the receiving end of the move, I remember thinking that it seemed a bit Cary Grant-ish [as if that's a bad thing], but it never occurred to me that I was getting recycled material." Yet she can't get too exercised about this because, as she reasons, making a pass at someone is scary: "failure hovers, rejection looms." If you've discovered a trick that worked once, why mess with it? "As Nick Carraway remarks of Gatsby," she writes, "personality is an unbroken series of successful gestures; though maybe he should have added that the most successful gestures have been rehearsed in advance."

The more usual line these days would be for the writer to burnish her image as a wronged woman (much like Woods' wife and mistresses did when they shared their tears with the tabloid press) and portray the Lothario as some breed of low-level predator. But Kipnis has no interest in such melodrama -- except as a form of melodrama, or playacting, that is. In "Men," she returns to an incident she has written about before, a long, histrionic essay by Naomi Wolf about an incident during her senior year at Yale, when the celebrated professor Harold Bloom put his hand on her thigh and emitted the preposterous come-on, "You have the aura of election upon you." Nothing came of this -- Wolf was not Bloom's student, although she was attempting to get him to critique her poetry, and she leapt up to vomit in the sink as soon as he touched her, permanently discouraging him -- but Wolf maintained that even 20 years later she was terrified of Bloom and traumatized by the event.

"There's no doubt that being groped by someone you find unappealing can be disgusting and gross," Kipnis writes, but she's bemused by Wolf's lingering obsession with it. Although "one of the less attractive men on the planet," Bloom "had an aura that was compelling and intimidating, he attracted brilliant acolytes, and Wolf wanted to be one of them." In fact, Wolf recounts being "sick with excitement" when Bloom agreed to look at her poems; she fully believed he could single her out as one of the chosen. But instead of behaving like a magisterial bestower of literary merit, Bloom turned out to be after what Kipnis views as his own form of validation: the sexual attention of a pretty young undergraduate.

Yes, it is gross, but absent coercion, persistence in the face of refusals or quid pro quo demands, it is also pathetic and all too human. This grubby scenario, Kipnis remarks, can as easily be interpreted as Bloom's humiliation in the face of Wolf's sexual power, "so transfixing for the aging ugly man that he abandons all dignity and puts himself in such an untenably comic position." This is not, to say the least, an ideologically fashionable position to take nowadays. "It isn't really clear," Kipnis writes, "that either's fantasies were more objectifying than the other. When Wolf insists that Bloom had power over her, what she doesn't get is that it's because she's in thrall to his power, not because he exercises it ... I fully agree that men have too much power, though what we glimpse here is the degree to which that power continues to be propped up by women's fantasies about masculine icons."

Kipnis tends to view many highly politicized or controversial situations in this light: as rocks lifted up to reveal a squirming mass of icky, confused and self-serving motives. Humor and a kind of rueful empathy for human folly, not outrage, tends to be her go-to response. In fact, she berates herself for lacking a capacity for "moral seriousness" that she feels would make her a more marketable social critic and fantasizes about receiving a transfusion of the same from New Republic editor Leon Wieselter, who seems to have plenty to spare. Hence, her reluctance to condemn "juicers" like cyclist Lance Armstrong and the fabulating memoirist James Frey. They are only observing the same ruthless, unprincipled ambition as our corporate overlords, after all. "Why are individuals supposed to uphold some antiquated, pre-capitalist code of honor when their employers and industries honor nothing in return?" she asks. Good question. Laura Kipnis asks a lot of those.