"Now we are organized. We are strategizing. And we are going to bring our message to the power structure" 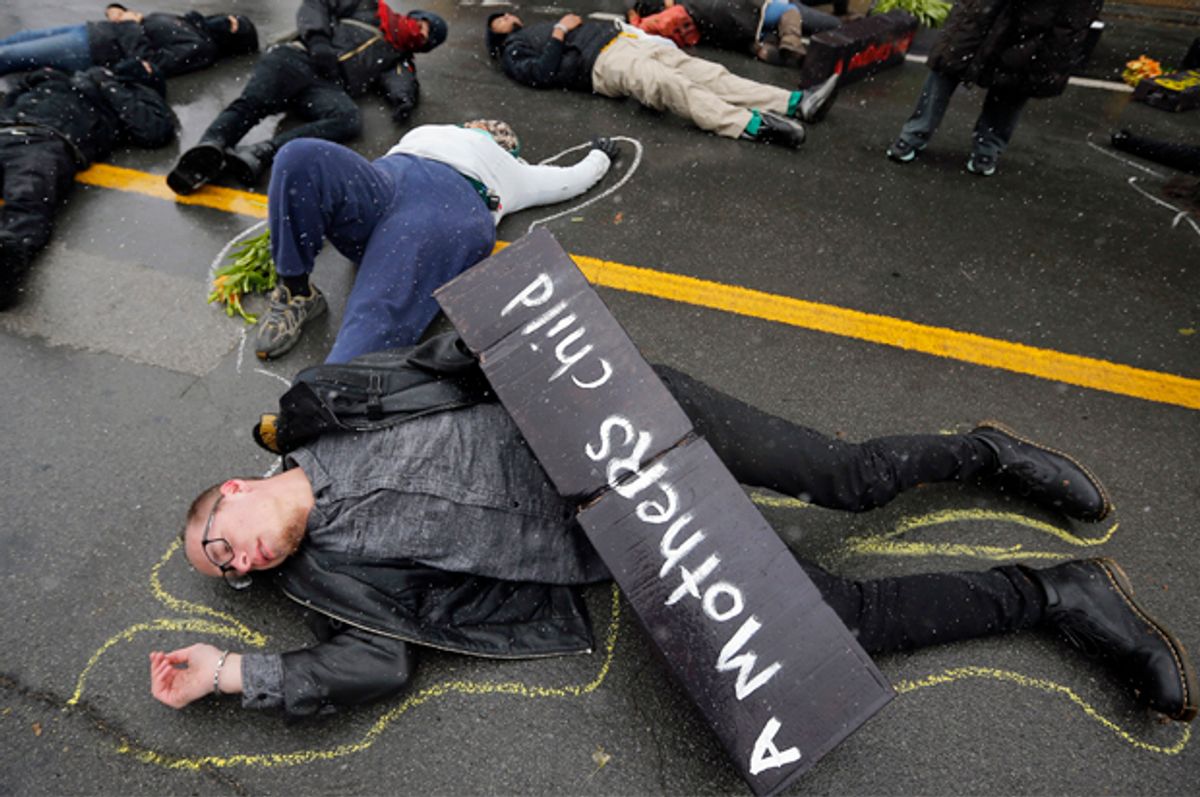 Demonstrators lie on the ground during a protest marking the 100th day since the shooting death of Michael Brown in St. Louis, Missouri November 16, 2014. (Reuters/Jim Young)
--

On Sunday, several hundred protesters took to the streets of downtown St. Louis in order to express continued disapproval of the way the Ferguson and St. Louis County law enforcement handled the death of teenager Michael Brown at the hands of Officer Darren Wilson this past August.

Staging a "die-in," protesters lay down in the middle of the street, outlined by chalk as if they had been shot, while others took on the role of police officers. The group of demonstrators later went on to block an intersection near Washington University in St. Louis, in what amounted to a peaceful day of protests.

"This is a mature movement," said organizer DeRay McKesson, 29, in an interview with Reuters. "It is a different movement that [sic] it was in August. Then it just had anger, justifiable anger. Now we are organized. We are strategizing. And we are going to bring our message to the power structure."

Indeed, groups in the Missouri suburb are preparing for the worst as a grand jury tasked with the decision of whether or not to indict Wilson is set to come to a decision in next few days. In fact, over 50 organizations have banded together in a "Don't Shoot Coalition" with the shared goal of justice for Michael Brown.

In dozens of training meetings like the one held at the church here on Thursday, demonstrators have been given lists of items to keep at the ready for when a decision is announced: gloves, maps, protest team names and phone numbers, medical supplies and a "jail support number," in case of arrest, to be written in permanent marker on a protester's arm. Leaders have shared text alert numbers to keep in constant contact.

They have announced safe spaces in area churches where leaders say protesters can warm up and stay clear of the police, as well as “hot spots,” locations around Ferguson where demonstrations seem likely. In another indication of the level of planning going on, some leaders say they intend to carry out their acts of protest even if the grand jury brings charges against Officer Wilson to show that the issues raised by this case reach beyond a single shooting. One more sign of the elaborate organizing: the group Hands Up United has produced its own polished video.

Organizers have also established 19 "Proposed Rules of Engagement," which outline everything from what police conduct should be ("Police will wear only the attire minimally required for their safety" and "Police will be instructed to be tolerant of more minor lawbreaking (such as thrown water bottles) when deciding whether to escalate the use of force") to the role of media ("Media and Legal Observers shall not be considered participants in protests and shall be allowed to do their jobs freely") to attending to the needs of residents ("Every attempt will be made to provide alternate routes or other means for non-involved persons to get to places of employment and meet other transportation necessities").

The co-chairman of the Don't Shoot Coalition, Michael T. McPhearson outlined the goals of the movement to the New York Times: "It must be changing how police and citizens relate to one another. We're calling for police accountability, police transparency, changing how the police do their work. If there's an indictment or if there's not an indictment, we still have that work to do."