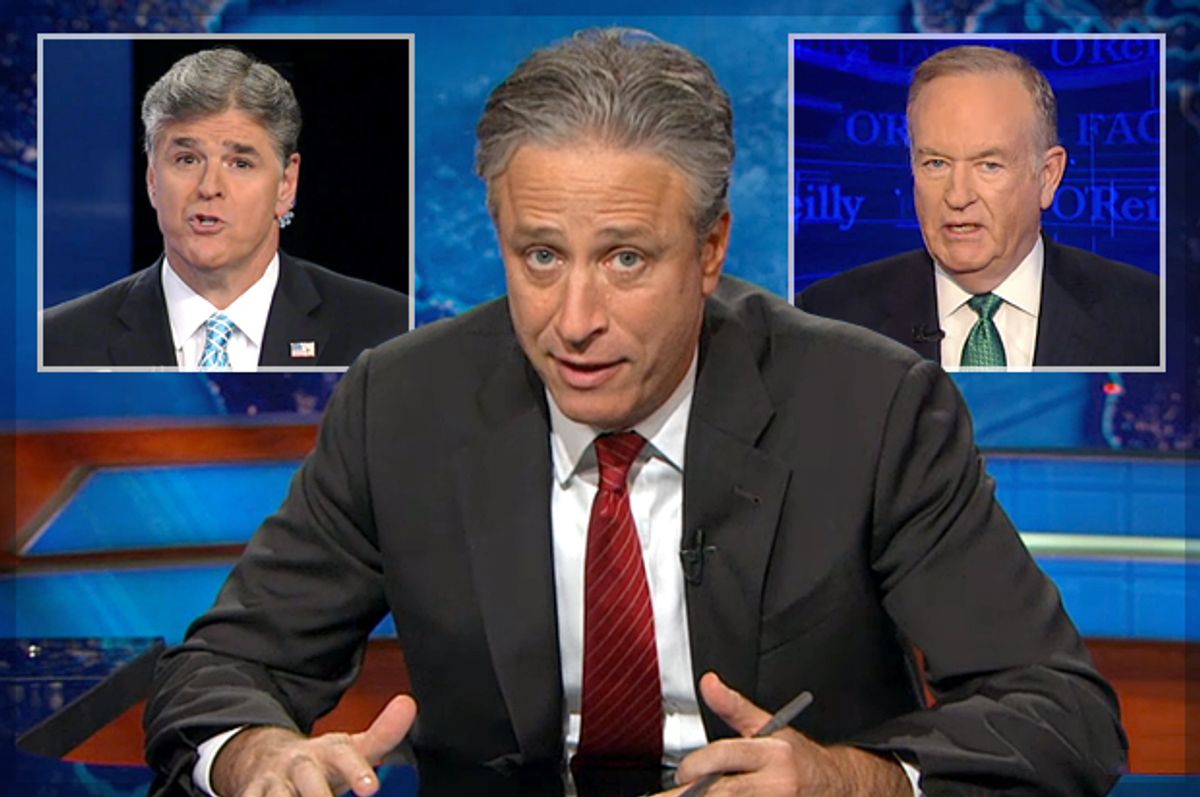 Jon Stewart has been on the interview circuit to promote his new film, “Rosewater,” but many of his comments have turned to partisan politics and the pundits who encourage them.  Interviewers have not been able to resist the urge to talk about Stewart’s thoughts on the midterm elections, on immigration, and on the legacy of Obama.  But what has been really interesting to watch is Stewart’s comments on Fox News and on commentators like Sean Hannity and Bill O’Reilly.

In a recent interview with Rolling Stone, Stewart explained that most of Fox News is about fear.  Fox News viewers, he explained, operate in a world where they have a high sense of being persecuted, and this is why, for instance, we will soon see pieces on the “War on Christmas” with commentators standing next to 60-foot-tall Christmas trees.  But not all Fox News commentators are equal in Stewart’s eyes.  He considers O’Reilly to be more like a “Kennedy Democrat” who comes by his views honestly.  Not so with Hannity, whom Stewart describes as “probably the most loathsome dude over there.” He describes Hannity as espousing “pure cynicism”: “Everything is presented in as devious a manner as it could possibly be presented.”

It’s worth remembering that from the moment that Fox News was founded in 1996 the goal was to offer a partisan view of the news.  David Brock and Ari Rabin-Havt in "The Fox Effect" explain in detail how Roger Ailes turned the cable channel into a propaganda machine.  And once the channel launched, all other cable news responded. Few recall that Ann Coulter used to work for MSNBC before Fox was founded.  It’s hard to imagine it in the blue versus red world we live in now.

Three years after Fox News used the slogan “fair and balanced” to promote a channel that had no intention of being either, Jon Stewart took over “The Daily Show” and he has been using satire news as a foil for Fox News ever since.

Stewart has the crazy idea that we should treat the citizens of our nation with respect and that we should offer accurate and informed news to help educate an active and engaged democracy.  Meanwhile on Fox News it is common to see pundits attack major segments of our society while misinforming their viewers.

Evidence of these tactics was in place in the Nov. 14 interview between Stewart and O’Reilly on “The O’Reilly Factor.”  O’Reilly began the interview introducing Stewart as a “big-time liberal commentator” and focusing on the midterm elections.  He asked Stewart to explain why the Democrats lost and Stewart responded with a very non-partisan answer: “Because they curled up in a little ball and tried to make sure that nobody hit them. I have no idea what they even ran on.” But Stewart’s answer wasn’t what O’Reilly wanted to hear.  So he offered his own analysis: The Democrats lost “because the callow youth that watches your program didn’t show up,” he said to Stewart.

Callow youth? First of all, all the data suggests that the millennials, the main demographic for Stewart's show, did show up.  At 21.3 percent they voted at the same percentage as last midterm.  And this despite the very real challenges they have to actually casting votes. These young people juggle jobs and classes that make finding the time to get to the voting booths a real challenge. Add to that the voter ID regulations and lack of early voting options designed to suppress their vote.

Second of all, it is hard to understand how O’Reilly can refer to Stewart’s young viewers as callow stoners when they also volunteer at a higher rate than boomers.  And they score higher in knowledge of political issues than viewers of Fox News.  So if they are all stoned, it isn’t affecting their ability to keep track of the facts and give back to their country.

This sort of misrepresentation is legion on Fox News and makes its viewers the most misinformed in our nation.  A fact-checking site found that Fox News only tells the truth 18 percent of the time.   In contrast, the satirical comedians like Stewart, Stephen Colbert and John Oliver have been proven to accurately inform their audiences even though they are not news shows.

And despite the hype, it is not Stewart, Colbert and Oliver who are stirring up the partisan spin.  Sure they attack Fox News, sure they call out the outrageous positions of many Republicans, but they go after the Democrats too.  Stewart’s post midterm election coverage included a bit called “Obama and the Pussycrats.”  That’s far from subtle.

In contrast, Hannity paid $300,000 for a portrait of Obama burning the Constitution.  And when he was asked to respond to Stewart’s comments about him from Rolling Stone for Politico Hannity was quick to attack: "Jon's problem is he has his head so far up Obama's ass he cannot see clearly, he is obviously better suited to reading his joke writers material, and making his clapping seal audience happy.”  No wonder Stewart said he had no interest in having Hannity ever appear on his show.

These exchanges have shown that Fox News propaganda is hitting new highs.  The parallel between these interviews and the subject of a free press covered in “Rosewater” should not escape us.  Iran may have put Maziar Bahari in prison for his reporting, and Stewart may be free to critique Fox News, and yet we have much in common.  If Stewart started his interviews explaining that his film was about fundamentalist ideologues pretending to be sources of news, but instead spouting propaganda and misinforming the public, you might think he made a movie based right here on our home turf.