Steve King makes his move: How the Tea Party hero's bid for power could decide the 2016 election

The anti-immigrant congressman wants to be a player in the Iowa caucuses, which should make Democrats very excited 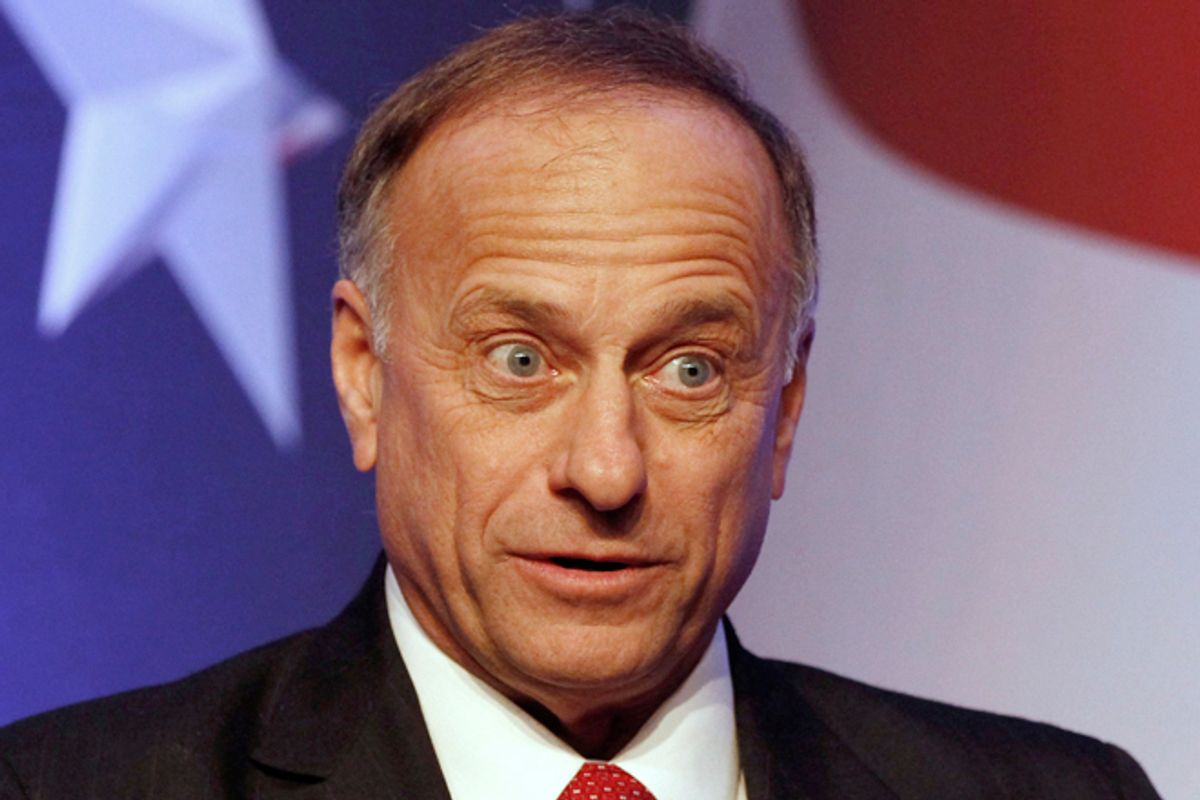 During the final weeks before Election Day, when they were frantically searching for any issue they could use to motivate their base, Democrats launched an ultimately unsuccessful messaging campaign to turn Iowa Rep. Steve King into the face of GOP immigration policy. There was more than a little hyperbole here; even if he was the unofficial spokesman for the party’s most uncompromising nativists, King was hardly calling the shots. But even if it was a bit of a rhetorical stretch, it now looks like the biggest reason the King strategy didn’t work was simply bad timing. Democrats played the King card too soon.

At least that’s the impression one gets after reading this new report from the Des Moines Register, which, trigger-warning, will make the hair of any immigration reform supporter stand on end. Why? Because according to the Register’s Jennifer Jacobs, the recently reelected King, who once compared immigrants to dogs, is now angling to play a bigger role in the caucuses in his state that every four years kick off the presidential primary elections. That’s why he’s created, along with the group Citizens United, something called the “Iowa Freedom Summit.” It’ll take place in January, and Sen. Ted Cruz, former Gov. Mike Huckabee and former Sen. Rick Santorum are already scheduled to attend.

If King succeeds in making himself a … president-maker — and there’s no reason to think he won’t — it’ll reduce the chances of major, enduring immigration reform coming out of D.C. after 2016 to just about nil. But that’s something everyone but the most hopeless bipartisanship dreamers knew already. (Indeed, the president’s soon-to-come orders are in essence an acknowledgment of that fact.) The changes King’s move may signal, then, concern the politics rather than the policy of immigration. And they suggest that during the next presidential campaign, the Republican Party may be more openly xenophobic than it’s ever been.

That sounds dramatic, I admit; but I included those two qualifiers, “openly” and “may be,” for a reason. There’s little doubt, for example, that the xenophobia of the GOP in its earliest years — when the party was being pieced together by Whigs, abolitionists, Free Soilers and Know Nothings — was far more visible and vitriolic than it is today. And a good case could be made that the party of the 1920s was even more hostile to immigrants (especially Catholic ones) than it is now. But in the mid-19th century and in the years before the New Deal, immigrants in America were either negligible as a political force or had yet to reach their power’s full expression. With Latino voters having played a major role in the last four federal elections, both scenarios are no longer the case.

More than anything else, what the rise of “Steve King, power broker” would indicate is how well-founded were the worries recently expressed by Chris Ladd, a writer for the Houston Chronicle. In a post-election column that was predictably beloved among liberals and Democrats, Ladd, a “GOP-lifer” who seems to loathe the conservative movement, argued that the party’s success in 2014 would teach it all the wrong lessons and set it up for a blowout in 2016. “Few things are as dangerous to a long term strategy as a short-term victory,” as Ladd puts it. Instead of recognizing that a series of low-turnout midterm successes does not a national majority party make, the GOP, Ladd fretted, would interpret their triumph as a mandate to remake the country in the Tea Party’s image. And when it comes to immigration, that image is King’s.

To put it bluntly: Unless the economy takes an unforeseen dip in the coming years, or congressional Republicans manage to finally discover a real-deal Obama scandal, the Republican Party will not win in 2016 if Rep. Steve “cantaloupe” King is the steward of their policy on immigration. All the more so if right-wing outrage over the president’s executive orders is what fuels his rise. Of the many tectonic shifts happening right now in American politics, the increasing transformation of the GOP from a national party into a machine run on a finite supply of angry old white person grievance is probably the most important when it comes to electoral outcomes.

The Steve King card may not have worked for Democrats in 2014, but you can be sure that, after reading the Register report, they’re already dusting it off and making copies for the next election.