Taylor Swift was made for the Victoria's Secret fashion show: Why female pop stars make the best VS musical guests 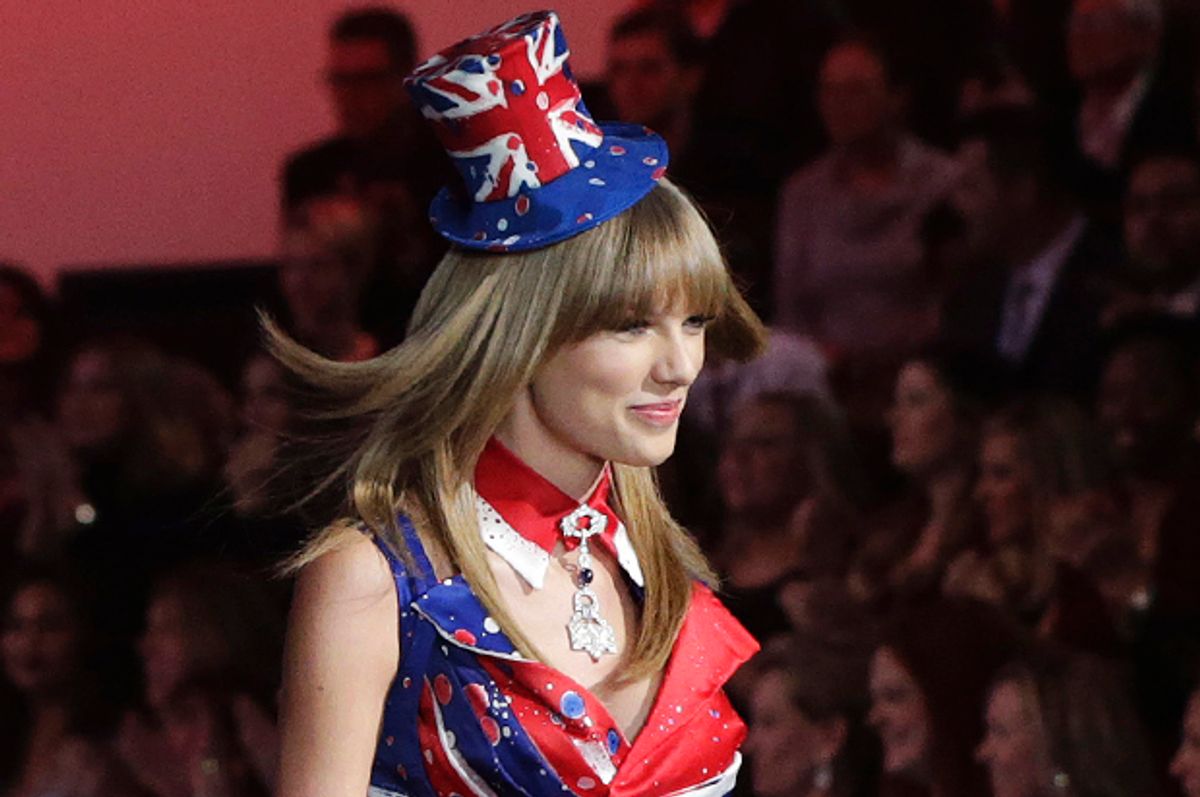 Victoria’s Secret announced yesterday that Taylor Swift and Ariana Grande will perform at the annual VS Fashion Show, which airs Dec. 9 on CBS. So will Hozier and Ed Sheeran. The annual extravaganza is more than a lingerie fashion show. It’s more of a glitzy spectacle for its own sake than serious catwalk business, with a dash of old-school showgirl camp crossed with the best parts of MTV’s VMAs. A memorable musical appearance in the show depends on a few variables: a song with a driving beat, a fashion-forward outfit, and most important, chemistry with the models. It's hard to imagine Swift and Grande, with their perky charisma and penchants for show-stopping outfits, not knocking it out of the park. But a survey of recent Victoria's Secret shows suggests that the men of the evening, Sheeran and Hozier, might want to study up on the finer points of musical guesting. The VS Fashion Show is a consummate ladies' night, and -- just to wildly generalize for a moment -- the guys often seem to miss the point.

Swift is a VS Fashion Show veteran. She opened last year’s show with Fall Out Boy, sporting a tongue-in-cheek sequined Union Jack ensemble in a nod to the London venue, and then reappeared solo later in the show in an icy cocktail dress. Like the best musical guests, Swift interacts with the models, but only on their terms. She lets them acknowledge her on the catwalk and she responds.

But watching Justin Timberlake perform "Sexyback" in 2006 is just frustrating. He emerged from underneath the stage and immediately ended up in the way and underfoot. This is the most common mistake dude singers make at the VS show. Many of them don’t seem to be able to wrap their heads around the idea that we came to watch the models first. And all of Timberlake’s unrequited sighing and moaning feels lonely and weird when a dozen gorgeous, scantily clad models march past him onstage, trying not to trip over his feet or look him in the eye.

Even worse than Timberlake is Usher in 2008, who upstages the models by actually moonwalking in front of them. He’s so far up in their path the models are practically forced to interact with him in a series of goofy little improvised dances. At one point, an angel wing nearly knocks his hat off.

There’s a way to do this that doesn’t look creepy or desperate. Who knew Adam Levine would be the one to show the way? (Not so surprising: He knows these ladies better than anyone, having dated many of them.) Too bad he’s wearing a dingy tank top. But “Moves Like Jagger” is a great song for the catwalk, and the models definitely have an extra strut in their hips for this number.

The most egregious upstaging comes from Jay Z and Kanye West performing “Niggas in Paris” in 2011. Between their egos, there’s no room for models on the stage. Even if the director couldn’t make Hova take a back seat to a team of winged supermodels, or even wear something fun, on the catwalk, the show definitely missed an opportunity to make the most out of this number, like flying the angels over the stage or something.

At the same show, West performs “Stronger” while models dressed like superheroes walk, and while the whole scene is much more interesting, West, like Timberlake, flounders in the space, getting in the way more often than not.

Justin Bieber commits a double foul in his first 2012 set of no models and a mopey acoustic ballad, but at least he’s dressed like Barbarella’s little cousin.

Here’s how it’s done. In 2012, Rihanna, glammed up in pearls and black silk like Holly Golightly-meets-Willy Wonka, demonstrates an easy chemistry with the models during “Diamonds,” her mannered poses framing the models rather than getting in their way. The set is sexy, adult, romantic — the epitome of the Victoria's Secret Angels theme.

But the show has its silly moments, too. Bringing the high energy, Nicki Minaj (in pink wig and Technicolor dress) pumps up the crowd and the models, making the VS show look like the most fun ladies' night ever. Even the angels are singing along, and the whole scene devolves into a massive dance party at the end.

Katy Perry’s 2011 “Teenage Dream”/ “California Gurls” medley delivered a seriously cohesive theme, from clothing to props to sound. The outfits all channel a grown-up My Little Pony aesthetic, and the models are smiling and clearly having a blast. Listening to the stage manager call the show is the best: Now the balloons! Cue the bubble gun! Perry strikes the right balance onstage, neither losing herself in the background nor stealing too much of the focus from the models.

Even though the evening revolves around beautiful women wearing, for the most part, very beautiful underwear and little else, the fashion show isn't a video shoot or a romance narrative. It's a celebration of glamour and fun, delivered with a solid wink and a set of gigantic feathered wings. The women of pop seem to get it — they've been working the line between sexy and campy for years now. Too bad the guys so often take themselves, and beauty, just a little too seriously for this stage.