"I am lonely, will anyone speak to me": Inside the saddest thread on the internet, ten years later

In 2004, this thread became a viral sensation. It still exists--and it reveals how much the internet has changed 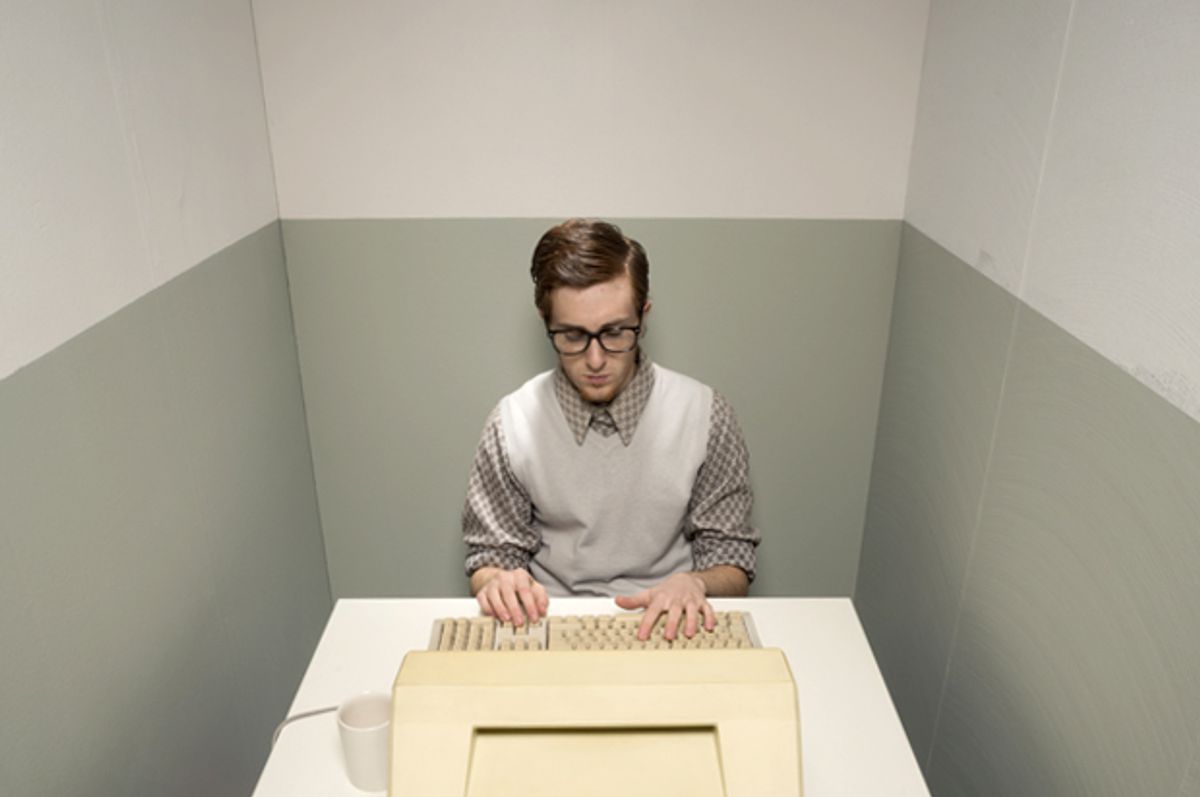 This October, a guest user logged onto moviecodec.com — a technical Q&A forum for media file playback and conversion — to post a cry for help on one of the site's off-topic forums. “[I']m so lonely,” wrote the user, “feeling sad please anyone talk to me.” It was an almost word-for-word replica of the thread's title, written 10 years and thousands of posts earlier: “i am lonely will anyone speak to me.” The thread's creator was also a guest, who logged in as “lonely” in 2004. A decade ago, due to the freakishly searchable title and the fact that the site was already optimized for maximum Google search exposure, the thread went viral. Within days, it was the No. 1 result for “I am lonely” on Google, and hundreds of anonymous lonely hearts were flocking to the forum to commiserate, console and weep.

Today, the “i am lonely” thread is a decade-long anthem to the phenomenon of loneliness in the Internet age. It has its own Wikipedia page. It was written up in the New Yorker and the Guardian. It's no longer the first result for “I am lonely” on Google, but its longevity makes it a poignant record of a certain type of Catch-22 loneliness: the isolation of people who turn to the Internet to make them feel less alone.

Nine days after “lonely” posted, other anonymous users joined in, saying that Google had sent them. Toward the end of 2004, the site's webmaster, Bjarne Lundgren, wrote that he was lonely, too. In 2005, the lonely hearts began to talk about forming a club, throwing a New Year's party, or moving to an island together to drink champagne from coconut shells. In 2006, Lundgren started a separate forum for loneliness called alonelylife.com, because the thread's popularity made him realize that “apparently there weren't that many places on the Internet for lonely people.”

Google continued to send the lonely to the thread, and the lonely continued to cry out (“i must be the loneliest girl in the whole wide world”) and offer empathy (“I’m glad I found you guys. Hang in there. We won’t feel lonely forever”). Sometimes they even recognized each other. In 2008, the thread took an odd leap toward real life when “DepressedChaosGirl” and “Rick James” realized they had a friend in common — the boy that DepressedChaosGirl was so desperately crushing on.

By now, the thread was full-on famous, and the original poster, “lonely,” was something of an inter-thread legend. People would reply to lonely's first post, asking him or her what they wanted to talk about, or else they'd wonder aloud where “lonely” had gone. Sometimes a guest user would post under the name “lonely” — maybe the original, but probably an interloper — saying things like, “i am still lonely, 9 years later.”

Trolls and spammers did pop by from time to time — a rash of manic posts promising that “spellcasters” would cure everyone's loneliness flared up in 2013 — but in general, the thread has stayed overwhelmingly calm, kind and respectful, thanks in part to moderators who've watched over it as though it were something sacred. “I’ve been taking care of this thread since 2009,” wrote Culpa the White Mage in June. “This thread still serves a good purpose to lonely people. If people want to post here, let them. But follow the rules, because if I see any flaming or trolling in here, it’s a ban.”

But as time passed, something of the thread's therapy-like quality was lost, and people posted less and less. The thread was officially a meme, but a decade is a long time in Internet years. When “lonely” started the thread in 2004, the Internet was a different place. Social media was just starting to become a thing; only 12 percent of the world's population went online as opposed to today's 40 percent. It wasn't the dark ages of technology by a long shot, but the online world was slower and smaller.

Today's bigger, flashier Internet means lonely people don't have to turn to a random off-topic thread on a tech site to assuage their feelings of isolation. “[The thread] no longer receives as much traffic as it used to receive, and I believe that is mostly due to there now being many more sites and sources on the Internet dealing with loneliness,” says Lundgren. The lonely can take a Loneliness Quiz from Psych Central or join the Campaign to End Loneliness. They can listen to sad arias on Spotify while ordering near-limitless amounts of comfort food from GrubHub. If loneliness is cured by distraction and a sense of interconnectivity, the Internet is a much better place for the lonely today.

But has the Internet also turned crueler? More isolating? Lundgren seems to think so, calling Internet forums “generally more harsh and less helpful than 10 years ago.” (And it's not just forums. “The distribution system for our beastliness has gotten so much better because we have the Internet now,” said satirist Andy Borowitz on NPR in 2010.) Why the bad turn? “Because as a whole people have become more hurried, more goal-oriented, and less helpful on the Internet,” says Lundgren. “People don't 'hang out' and help each other the same way as before.” If this is true, the “i am lonely” thread reflects this shift. Though the overall tone remains empathetic and helpful, a sense of solidarity, of us-vs.-them, has been lost. As one guest user wrote in August, “This thread signifies the very volatile nature of society. Look at the replies people were getting a decade ago after they confided to a forum that they were lonely and look at the replies people get now ... SADDENING.”

Whether or not the Internet is the dark source of all our loneliness is a fiercely debated topic. It's like the chicken-or-egg conundrum, or the tree-falling-in-the-forest question. Does the Internet cause loneliness, or do lonely people choose the Internet? If one solitary nerd has a thousand online friends, is he still alone in real life?

No one has been able to answer the question conclusively. A 1998 study called the “Internet Paradox” is still an apropos descriptor of the whole mess. We use the Internet to communicate, but is it killing “real” communication? We chat with old crushes on Facebook, but should we really be taking out our headphones and talking to the cute guy in the checkout line? Terrifying think pieces about the links between technology and dying alone are, ironically, all over the Internet; in Public Culture, Zeynep Tufekci points out that this is mostly an “appeal to moral panic,” as there's not a lot of empirical research to support these hypotheses. But there's a reason we see a headline about Facebook causing loneliness and think, yes, that makes sense. It's not empirical, but it's intuitive. Everybody knows the sort of gnawing ache that hits when you find yourself online late at night. You feel ... like a loser. And you want to see if anyone else is out there.

The “i am lonely” thread provides affecting — if inconclusive — contributions to the Internet loneliness debate. On the one hand, without the Internet, where would the lonely Vegas housewife “alone in [her] room and longing for company” go to vent? On the other hand, would user “depresico” have a better life if the Internet didn't exist? “Another thing for my loneliness is those freaking computers,” depresico writes. “[I] just happend to have my computer as my best friend since i wasnt that socially related to the outer world but now i realized how much i had missed” [all sic]. Another user mourns the sadness of using technology to connect to people “who may not even exist.”

The crux of the Internet loneliness debate isn't actually the Internet; it's the tension between Internet reality and real world reality. There's a sense in which the Internet is somehow fake, and that the real world is better, but we go online to talk about it anyway, hovering in that space between technological connection and physical connection. It's illogical to think of the Internet as separate from the real world — we're still regular people communicating regular things on it — and yet we constantly differentiate between the two. Lundgren, for instance, believes that loneliness can only be solved in the latter.  “The Internet will never suffice,” he says. “You need to actually talk to and see people in real life to feel like a real person.” In other words, there's a fear that a person on the Internet is somehow less real than an unplugged one. And the fear of talking to people “who may not even exist” on the Internet is a relevant, though surreal, worry. If the original poster, “lonely,” logged off forever and never came back to the thread, how much value do we get from thinking of them as a real person with a real life and real loneliness? For all intents and purposes, hasn't “lonely” become just another search term, another bit of code?

The German psychiatrist Frieda Fromm-Reichmann believed that people would do anything to avoid the lonely, or even the memory of having been lonely themselves, because loneliness is a contaminant. “It is so frightening and uncanny in character that [those who have been lonely] try to dissociate the memory of what it was like and even the fear of it,” she wrote in 1959. Webmaster Lundgren says that he hasn't posted on “i am so lonely” for years. “Personally I have changed quite a lot since 2004 ... my self esteem has hugely improved,” he says. The person who posted in 2004? That's not who he is anymore. The “i am lonely” thread is an archive of many things — empathy and sadness and the magic of a really good SEO term — but it's also a public record of something we don't want to admit about ourselves: that we went online late one night, anonymous, and named ourselves “lonely."