Hyping tension between president and Joe Manchin types, the Centrist Fetishists play Democrats against each other 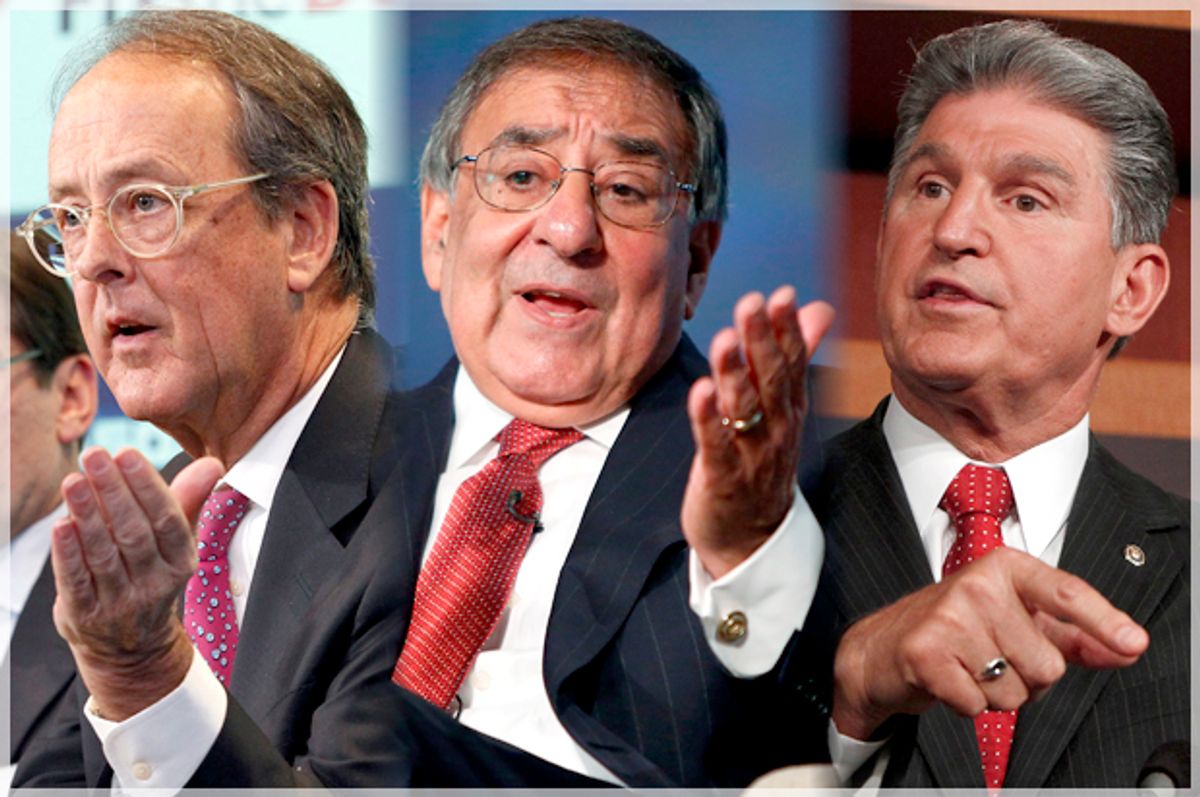 On Monday we had Politico telling us President Obama needed Sen. Mitch McConnell to “save his legacy.” Wednesday the National Journal’s Josh Kraushaar takes his turn defining Obama’s legacy, explaining that Obama has big bad plans to “advance his legacy … at the expense of the Democratic Party's long-term health.”

The problem with these narratives is that they leave the definition of Obama’s desired “legacy” in the hands of pundits not well qualified to define it. And both pieces posit that Obama and his party are at cross purposes: What’s good for one is bad for the other.

This is silly. Certainly there are issues that divide Democrats. And there’s been near-open warfare between Obama and Senate Majority Leader Harry Reid, with Reid’s chief of staff David Krone going on the record in the Washington Post blaming the president’s team for midterm losses, and Team Obama (never for attribution) blaming Reid.

That’s quieted down, with Reid emerging as a vocal advocate of the president’s coming executive action on immigration. In an interview with Univision, he said that action should come as soon as possible, denying earlier reports that he preferred to wait until after a long-term budget deal. Since a long-term budget deal seems to have been cleared off the table by conservative Republicans, Reid seems ready for Obama to be bold.

But executive action on immigration is the very issue that Kraushaar posits will divide the president from his party, even as it burnishes his legacy. The writer, who likes to troll Democrats, ignores that Democratic Senate leaders, including Reid -- plus Dick Durbin of Illinois, Chuck Schumer of New York, Patty Murray of Washington, Bob Menendez of New Jersey and Michael Bennet of Colorado – this week wrote to Obama and urged him to take bold action quickly to defer deportations of immigrants with long-term residency and strong family ties in the U.S.

In addition to deferring deportation, Kraushaar insists that vetoing a Keystone XL bill and finishing up a nuclear deal on Iran are, curiously, Obama’s “extreme” legacy-defining actions that will doom his party. They’re all viewed as priorities pushed by Obama’s unreasonable left-wing base. But some senators Kraushaar lists as opposing Keystone might (or might not) blanch at a nuclear deal with Iran. In fact most of the Obama moves that vex Kraushaar have a lot of support in his own party. Only Keystone seems genuinely divisive.

There’s no real ideological coherence to those three complicated Obama choices, but Kraushaar and others are invested in finding an obstructionist left-wing equivalent to the Tea Party on the right. Since none exists, they have to invent one.

Predictably, Kraushaar is riding the pony of false equivalence. Early in the piece he reveals “the dirty secret in Washington.” Wait for it: “While Obama (rightly) blamed Republicans for holding positions to the right of the American electorate, the president is pursuing policies that are equally as far to the left.” You can be forgiven if you stopped reading there.

Kraushaar is one of the leading (if less able) members of the Beltway Centrist Fetishist Caucus, who believe there’s a reasonable middle ground somewhere and if Obama could only have found it, he’d have been a two-term marvel of accomplishment, the next face on Mount Rushmore. If you were to locate this mythical reasonable middle ground, you’d find the husks of the Simpson-Bowles deficit commission report, alongside boxes of files marked Romneycare, which would have made for a wonderful bipartisan free-market healthcare reform plan -- if proposed by someone besides Obama.

You’ll also see fictional proposals that the GOP will trade a minimum wage vote for Keystone XL approval that only exist on “Morning Joe” cocktail napkins (I’m making that part up, they don’t have cocktail napkins), and video of Ron Fournier proposing Obama make Leon Panetta his chief of staff – after Panetta slammed the president in his self-serving new book – on endless loop.

What these “legacy” pieces have in common is the fiction that securing a positive legacy for the Democratic president requires centrist compromise with Republicans, nothing else.  Never mind that Obama delivered an important new social democratic program in the ACA, brought the country out of what might have been a second Great Depression and crafted imperfect but decent financial services reforms. Those are the things that historians will define as his legacy. Cozying up to Mitch McConnell or Joe Manchin won’t merit a footnote.