Three chords and the truth? Things get weird when the cranky Nirvana producer is the optimist in any debate 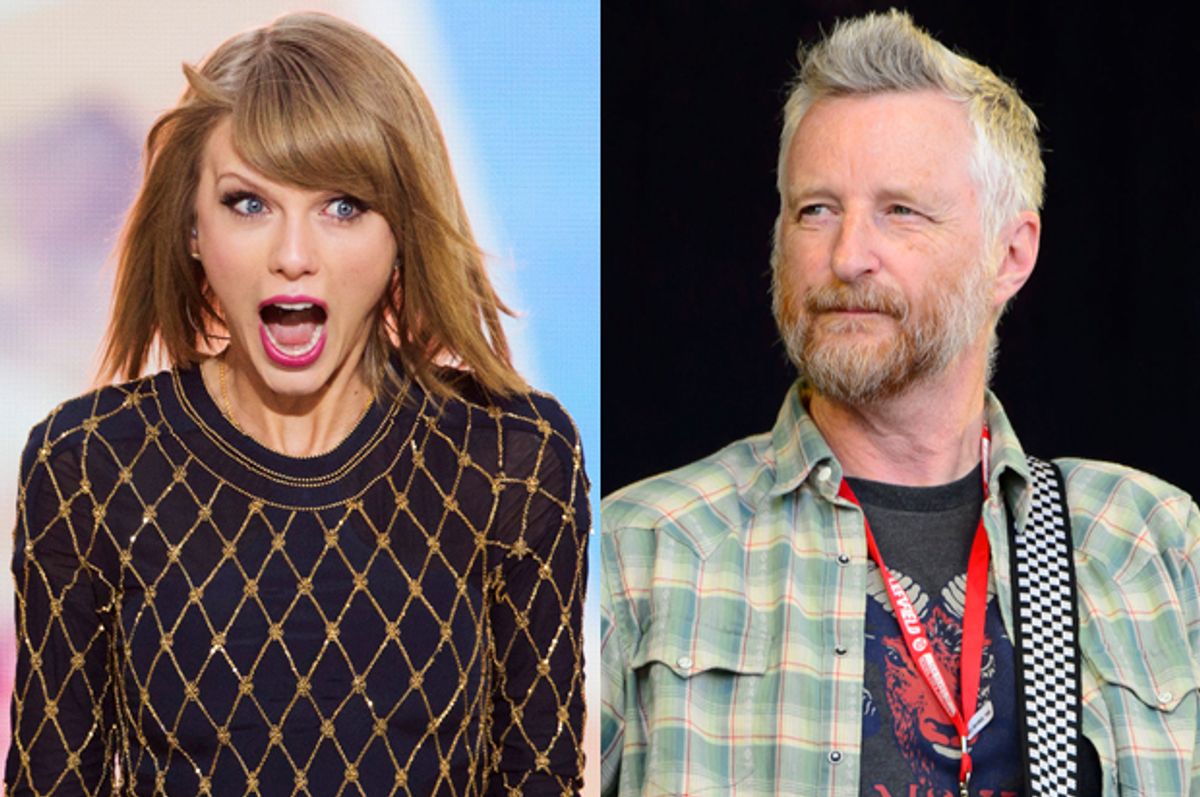 Folk rocker Billy Bragg joined in the online streaming debate yesterday on his Facebook page, calling Taylor Swift’s recent criticism of Spotify and her decision to pull her back catalog from the streaming service a “corporate power play” since her music is available for free on YouTube. Bragg wrote that Swift has “sold her soul to Google,” which is planning to implement a “Starbucks strategy” with YouTube and its new Music Key service to run the other online streaming platforms, including Spotify, out of business.

“Google are going after Spotify and Taylor Swift has just chosen sides. That’s her prerogative as a savvy businesswoman — but please don’t try to sell this corporate power play to us as some sort of altruistic gesture in solidarity with struggling music makers,” he wrote.

Bragg bases his criticism on Swift’s earlier interview with Yahoo, where she said she wanted to push back against the perception that music has no value.

“But she should just be honest with her fans and say ‘sorry, but [Google co-founder] Sergey Brin gave me a huge amount of money to be the headline name on the marquee for the launch of You Tube Music Key and so I’ve sold my soul to Google’,” he wrote.

A spokesperson for Swift denies the claims, saying that Swift “has had absolutely no discussion or agreement of any kind” with Music Key.

A preview of Music Key that ran in Wired last week describes how it works: “By harnessing all the music on the site—and the deals YouTube made with artists and labels to get/keep it there—Music Key takes the habit we all already have of pulling up YouTube clips when we want to hear songs and turns it into a music player that’s ready to go on your desktop or mobile device, even if you’re offline.” With more than 9 million channel subscribers, Swift is one of YouTube’s most popular artists. Her inclusion in Music Key is an extension of her YouTube presence.

Soul-selling, solidarity, Starbucks and corporate greed are classic Braggian protest-folk concerns — “savvy businesswoman” is a bit of a backhanded compliment here. This isn’t the first time the songwriter has taken shots at Google. Over the summer, Bragg spoke out on behalf of a group of artists pushing back against anticipated low-ball Music Key contracts, asking the European Union to intervene on their behalf. "They're in danger of launching a streaming service that lacks the innovative and cutting-edge sounds that independent artists bring," Bragg told the BBC in June.

Spotify, on the other hand, is Bragg-friendly; he even curates a “talking playlist” for the service where he recommends music he likes. While Bragg acknowledges that the fairness of Spotify’s royalty rates has been questioned, he praises the transparency of its system, which he compared to Google’s “we’ll just have to take whatever we receive and be thankful” approach.

In Spotify, Bragg has apparently found a streaming platform that he can live with. Why wouldn’t he be concerned that Google could ruin it for him if Music Key takes off and overpowers the competition? But the same can be said for Swift. The key difference here is that Bragg, a veteran with a passionate and loyal audience, has public credibility on his side, but he lacks the sheer brute market force of Swift, whose presence on Spotify now would help shore up the convenient, elegant, one-stop listening experience the platform promises as it prepares to go head-to-head with a powerful new competitor. Bragg has to care at least a bit about Swift’s business decisions, but the situation isn’t necessarily true in reverse.

On all sides, the airing of grievances in public is further evidence of increasing anxiety as artists and labels jockey to align themselves with the platform they think will come out on top, or at least net them the best deals in the meantime. So Swift can say she’s sticking up for music’s value, and Bragg can say he’s sticking up for indie artists, but ultimately, they’re looking out for their own best interests. Is there an ultimate good here? Probably not.

But producer/Shellac frontman and known cynic Steve Albini offers (of course) a contrarian view, laid out in his keynote at Melbourne’s Face the Music conference earlier this month. Rather than complain about the dismantling of the old channels of payment, Albini says he’s “satisfied and optimistic” about the state of music and “welcomes the social and technological changes that have influenced it.”

“Bitchiness about [payment streams] abounds, with everybody insisting that somebody else should be paying him, but that he shouldn’t have to pay for anybody else,” Albini said in his speech. “I would like to see an end to this dissatisfaction.”

Instead of trying to “figure out how to make this digital distribution work for everyone,” Albini instead embraces the potential end of “the framework of an exploitative system that I have been at odds with my whole creative life.”

Albini encourages a much more philosophical approach: “Music has entered the environment as an atmospheric element, like the wind, and in that capacity should not be subject to control and compensation.” The Internet has shortened the distance between artist and fan, and that’s a good thing, he argues. That shortened distance puts the control back in the musicians' hands, if they want it.

You know a situation has reached new depths when Steve Albini is the optimist in the room, but his idealism does cut right through the heavy-handed rhetoric of fairness and solidarity that both Swift and Bragg have been slinging. When a system involves three parties with different, contradictory values, Albini points out, it's "literally impossible for a system to satisfy all of these needs simultaneously." After these immediate streaming wars are settled, new distribution channels — and with them, new arguments — will surely arise, because third parties will continue to look for ways to profit from artists' work. Albini seems to be arguing that musicians are suffering from a failure of imagination if they're letting these corporate power plays dictate the terms of their audience engagement. Why be in such a hurry to replace old corrupt systems with new?