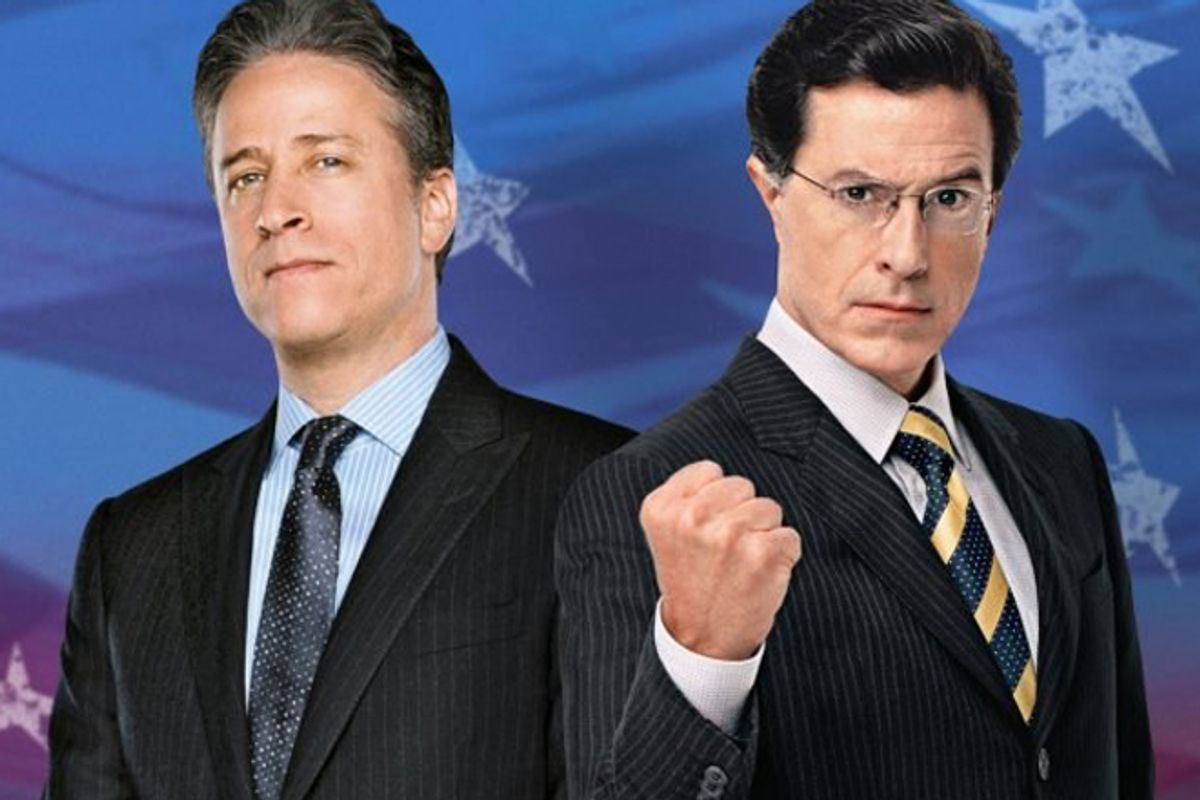 I’ve always been someone who’s felt very strongly about a lot of issues and about feminism and gender. Satire is a way to give your opinions on a range of things and make the medicine go down a little easier. For thousands of years -- satire has been around forever. It’s always been such a natural tool to talk about real serious issues.

In high school, I was a really big fan of "The Daily Show," which is a lot of people’s introduction. At that time – I guess it was 2002 to 2006, and we were in George W. Bush-land, so it was such an important thing. To be a liberal in George W. Bush’s era was, in my opinion, to be right. I do think "The Daily Show," at that time, had that going for it. It was like shooting fish in a barrel.

And Stephen Colbert, coming out of that, became a huge thing in American satire over the past few decades. I think it’s so incredible -- what made him so huge is that he never dropped [his role] – I have so much respect for how he commits to his bit, at any time. I posted the same Instagram photo for almost 100 weeks in a row – I’m really into that kind of thing. The thing that’s so incredible about that is that there’s a line between what you sincerely feel as a writer and comedian, and what you are portraying for the world, and sometimes people don’t know the difference. I imagine most people know what Stephen Colbert is doing, but there are people who don’t know who he is.

When I was writing my book "Science ... for Her," that was important to me -- that people not know I was a comedian or writer. There’s no bio of me in the book, as a writer who is doing this satirically: I wanted it to be presented as a sincere artifact. I think I took a page out of his book: I don’t ever want to drop that character.

You can make political or social commentary, but it’s so much easier to enjoy in the form of satire. I feel very strongly about liberal politics on the whole. But instead of getting on a soapbox and shouting, which is what happens on "The Daily Show," I like to be a character and make fun of the other side at the same time – which is kind of amazing.

One great thing about satire: You first and foremost probably want to be funny if you’re doing it. I’m a comedy writer, so I wanted to write a comedy book that also has feminism in it, which I care a lot about in my everyday life. And the options are: Write a sincere comedy book saying that women and men should be equal. I don’t really know how I would do that. The other option, which is more fun for me, as a rascal, is to write the most sexist book I possibly could, which is a science book that looks like a Cosmo cover – that women could only understand things if they’re presented in Cosmo form. And this way you can talk about literally everything that bothers you – playing devil’s advocate the whole time. And it gives you such a wide range to say all kinds of crazy things, since it’s under the umbrella of, “We’re making fun of that type of person.”

One of the things I really thought a long time about was whether I should include things about [sexual] assault and rape … Making fun of rape makes it so simplified, but I was not making fun of the victims. I’m making fun of the people who perpetrate it or say rape is not as bad as we all think it is. I have a piece making fun of what Todd Akin said a few years ago about “legitimate rape.” That’s quintessentially taking the opposite stance: In real life I think it’s horrifying that he said that, but also laughable. But in the book, I show how scientifically he’s totally correct. How in the case of legitimate rape, here’s scientifically how a woman’s body “shuts down.”

It isn’t that risky. Maybe some people would say that satire is easy, because no one can get mad at you. But in my opinion, it’s sort of a win-win. Like in the case of Colbert, I don’t see how anybody can get mad at him because he’s playing a character who does terrible things and says terrible things. For me personally, I haven’t had anybody ... Before the book came out, I thought people would get offended, but no one really has. It’s all for the sake of showing how awful my opposing persona is — this misogynist woman who’s writing this. So it’s her thing, not mine; I’m kind of buffered. Which is ingenious; whoever invented that …

I went to a very cool high school [in Portland] where I took a comedy class my senior year, in our English department, and this was just as I was getting interested in comedy writing. We read Aristophanes – ancient Greek satires, and then hundreds of years of satire; [Jonathan] Swift, of course. It has been done so much and never gets old. It’s a tried and true form of comedy: You read these plays from ancient Greece, and they’re saying very critical things about their government. You can go so much farther, as a humorist, doing a verbal war than somebody like Martin Luther, nailing pages to a door. Though I guess he was pretty successful too. Aristophanes’ “The Birds” was a big favorite, and “The Clouds,” I think.

What’s so wonderful about the show we write [“Parks and Recreation”] is it is a microcosm of all of America and specifically of government. Every once in a while we have episodes that have a real platform. There was an episode of Season 2 that was about gay marriage, but under the lens of penguins getting married, in a nice little country-fair situation … That is what’s so wonderful about any show, I think: You can show these very real, topical issues, but under a satirical or comical lens.

Once in a while I’ll have a tweet that I really like. Like, “Just woke up from a date rape drug. So it WAS a date!!” People weren’t offended; if you’re following me, you get who I am and you know it’s satirical. That’s making fun of people who do date rape, but also institutions, like women’s magazines, that think women are so desperate. Once in a while I’ll have tweets that are feminist satire.

The thing that I like about satire in general: My book [cover] makes me look done-up and pretty, and then I say horrendous things. Satire is about messing with what people expect of you. If you’re a woman, they have more strong expectations; that’s just the way stereotypes and gender roles mean. That’s why satire has so much capability to just totally mess with people’s expectations; that’s what makes great comedy. Not only are women funny – that’s not even a conversation – I think they have almost more of an opportunity to break out of this tiny box they’ve been in for all these years.

Megan Amram is a writer for NBC’s “Parks and Recreation” and the author of “Science… For Her!”