We are the terrorists too: Thomas Friedman and John Kerry are misleading you about the Middle East 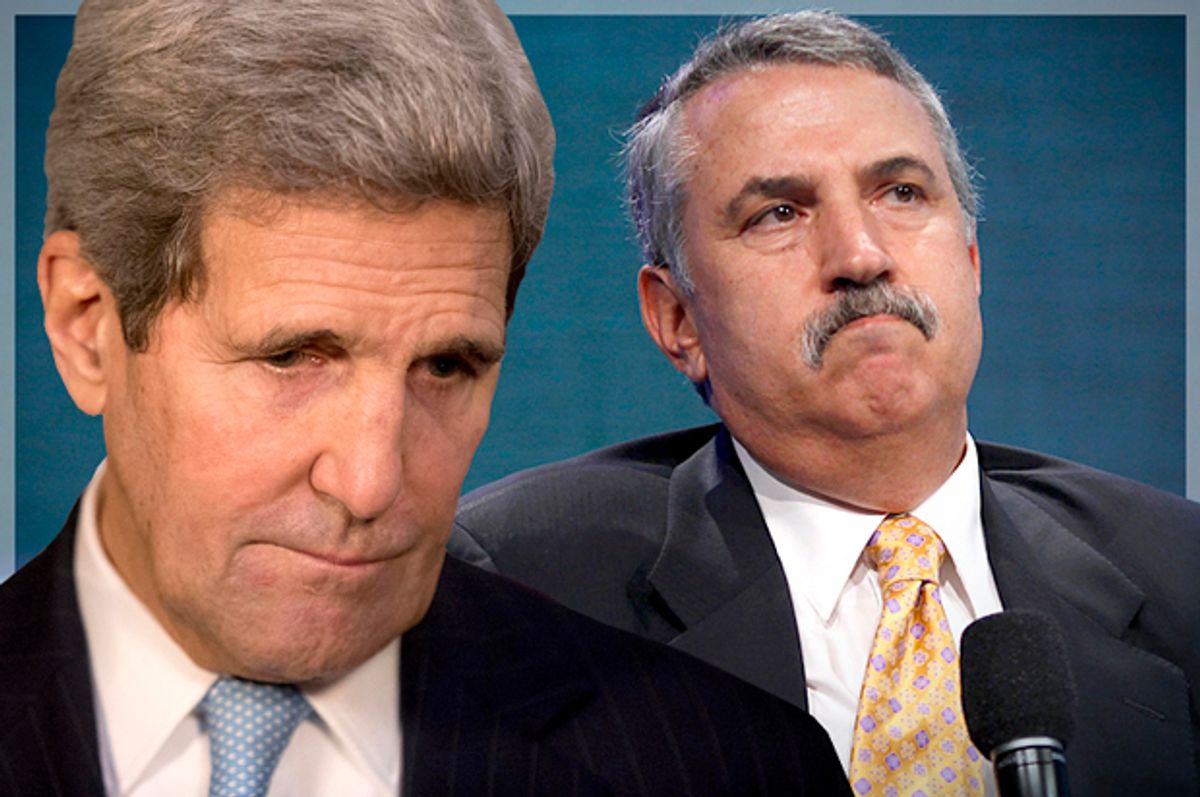 At a diplomatic do in New York the other night, someone remarked that the events that broke the Middle East wide open four years ago this season were misnamed. “It wasn’t the Arab Spring,” a smart-seeming man said. “It was more like the Arab winter of discontent.”

Nice one-liner. Clever in a small crowd. But it is sloppy logic. What began late in 2010 was indeed an Arab renewal, a bid for bottom-up democratic rule matched only (and not everywhere) by the awakening known in the history books as the independence era — the 1940s and 1950s.

What we witness now is bleak, wintry discontent times 10, yes. But this is the consequence of counterrevolutionary reaction among the region’s generals and despots and the interventions (not to say subversions) of Western powers — primarily, of course, the United States.

Take this apart. Everywhere there is crisis, violence and suffering, Washington has been active. Syria, Libya, Egypt, Iraq: All these fall into this category. Where the Obama administration and its covey of neoliberal evangelists in the State Department have allowed the events set in motion during the Arab Spring to take their course, there is at least some semblance of calm, if not better. Let Tunisia, now developing as a secular democracy, stand as the control in this experiment.

And let Egypt stand as the most grotesque, boldest-faced display of Washington’s anti-democratic intent to be found anywhere in the region. Here the lines are most clearly drawn. Here the generals within and the meddlers without got the subversion work done in front of our eyes. And here neither Secretary of State Kerry nor National Security Adviser Susan Rice nor President Obama has anything to say as Egyptians surrender all hope of a return to elected government in exchange for a reign of terror worse than those of the dictators who provoked the Tahrir Square protests.

A reign of terror. One grows heartily sick of this term in all its forms — terrorists, terrorism and so on. All movements opposed to Western interventions in the Middle East are terrorist. The Muslim Brotherhood, explicitly opposed to terror and violence and with a long record attesting to this, is terrorist. The dissident populations of eastern Ukraine are terrorists, for that matter. The word is deployed now merely to deprive those so named of any dimensionality or purpose that requires understanding. It cancels all historical perspective and altogether any recognition of causality. As a standing rule I never use it.

But I do in the case of Abdel Fattah al-Sisi’s Egypt, advisedly. This guy may sit in the presidential palace, but if Egypt since he overthrew Mohammad Morsi in July 2013 is not a horror house of terror, we better call in the lexicographers. There is simply no other way to describe Egypt as he rules it.

Immediately prompting these reflections are the accounts of the mess the Morsi coup has made of the Sinai Peninsula. Look at this picture, carried in the New York Times 10 days ago. The Egyptian military is on a campaign against anti-government militias in Sinai that now takes in the destruction of entire towns and cities, so forcing thousands of innocent families out of their communities and into who knows what conditions.

Let us be clear instantly. The Egyptian army is in pursuit of militants of Ansar Beit al-Maqdis. Champions of Jerusalem, as this translates — and do not be confused by the name — was up and running as soon as the Tahrir Square demonstrators brought down the Mubarak regime. These are some very brutal people. In neon script: This column is not a defense of this group.

Here is the BBC’s capsule account of Ansar Beit al-Maqdis. It may have links to Hamas, or to dissidents in the Muslim Brotherhood. It may just have signed on with the Islamic State, or it may still be tied to al-Qaida. We must stay with “may,” because one can never tell anymore where information of this kind originated. Appearances suggest the group has numerous factions.

But the record is clear. Ansar Beit al-Maqdis is Islamist. It is vigorously opposed to Israel, profoundly motivated by the fate of Palestinians and explicitly provoked by American interventions in Egypt. Its sabotage, assassinations and attacks on the Egyptian army have escalated dramatically since the al-Sisi coup that brought down Morsi.

Is there a surprise buried in there that I cannot find?

One more go-around on the question of “terror.” There have been hundreds of attempts to define this term and none has found a consensus. By the dictionary it means, roughly, the purposeful inducement of generalized fear and panic to intimidate or coerce, usually in the context of civilian populations. To terrorize is not the same as to fight a war, although terror is often a consequence of warfare.

Ansar Beit al-Maqdis is fighting a war. It may also be terrorizing Sinai residents, but one cannot say with certainty because the Egyptian army allows no one in to witness events. The New York Times story accompanying the picture noted above suggested that the group has some appeal among Sinai residents:

“‘If there are three young people in each home, you guarantee that two of them would turn into Ansar Beit al-Maqdis militants,’” said Abdel Rahim Ali, an analyst with close ties to the Egyptian intelligence services.”

In effect, the army’s destruction of all social fabric in Sinai communities is an effort to dry up the sea in which Ansar Beit al-Maqdis militants swim. In the context, it is perfectly possible al-Sisi’s troops have taken instruction from American veterans of the old “strategic hamlets” method in Vietnam, the destroy-the-village-to-save-it gambit.

The Sinai campaign is of a piece with the blunt instruments al-Sisi has wielded elsewhere since he took power; the coup, please recall, every Egyptian knows went forward when Washington telephoned army officers in Cairo to authorize it.

Mass murders in public places, middle-of-the-night arrests, show trials, the en masse sentencing of hundreds of innocent people, the blanket muzzling of the press, the coercion of an entire society into a silence Stalin could not improve upon — the list is long.

I have already noted my word for this.

I find two aspects of the Egyptian crisis to be especially tragic.

One is psychological, and I saw it many times when working as a correspondent. The East’s long encounter with the West has countless dimensions, but one of them can be a kind of self-contempt as the non-Westerner confronts the modern, materially superior Atlantic world. One of the things you find in East Asia today is that the region is at last outgrowing this terrible temptation and coming to itself as itself. It has taken 150 years.

I see this syndrome in the wanton abuse Egyptian generals routinely administer to their own people. They see themselves reflected in the poverty, ignorance and across-the-board underdevelopment of ordinary Egyptians. There is no self-love. And the beneficiaries of this deep instinct toward felt inferiority, in this case, are American policy planners. Take off the uniforms and scrape away all the cruelty, and you would find many Egyptian officers sharing the ressentiment of those they suppress — which is surely one reason Ansar Beit al-Maqdis seems to infiltrate the ranks with the apparent ease David Kirkpatrick reports in the Times.

Second, there is the baldly cynical design and intent of American policy. This is what makes the Egyptian case so revealing.

With the Sinai campaign, we see the architecture of the American strategy in full. Obama bumbled when he should have shouted praise as the Arab Spring began to blossom. One suspected from the first that we were in for a demonstration of just how opposed to democracy in the non-Western world Washington remains.

Following Morsi’s election, it was gradually clear that Prime Minister Netanyahu required a Mubarak-like tyrant in Egypt to protect Israel’s flank from active militias in Sinai, and then painfully clear Washington was set on giving him one. In my view, this is the single most important reason al-Sisi sits in office, behaves as badly or worse than any leader in the region, and still receives $5 billion in American military aid a year.

We also see the monstrous paradox of policy as it is now. Consider the Sinai question before Morsi was deposed and since. Ask yourself: If Washington and its new puppet in Cairo could have done more to worsen this, what would it have been?

Same story across the Middle East, of course.

At that diplomatic gathering mentioned earlier, there was talk of arming, training, equipping and bombing on behalf of this, that or the other proxy army or militia or no-name collection of “rebels.” One scholar alone — a non-Westerner, not coincidentally — mentioned the need for a Marshall Plan of the kind urged severally in this space. Not a word from the arm-them-equip-them-train them American diplomat present, one Maura Connelly, who runs the office at State in charge of keeping “the coalition” together as the bombs drop (which is called “kinetic activity” in State-speak, Ambassador Connelly wants you to know).

I have heard numerous postmortems — and I suppose this is the term, sadly — of the Arab Spring of late. None comes close to Thomas Friedman’s take in Wednesday’s Times, I have to say.

It turns out that the uprisings that spread through the region had nothing to do with dictatorships and democratic aspirations, after all. We were all radically mistaken. The Arab Spring was the outpouring of millions of Chicago School rational choicers. It was about material self-interest and iPhones and wanting to be like those clever, incessantly “disrupting” Silicon Valley innovators and entrepreneurs (two of Friedman’s favorite kinds of people). If only the Middle East could be like — get ready — Singapore (a police state by any other name) or Dubai (standard issue Middle Eastern monarchy) all the people in Tahrir Square would have rejoiced, having won their fight. As it is now, Friedman is here to tell you, al-Sisi’s Egypt is one of the Middle East’s orderly countries, and for this we in America are pleased.

You think I’m kidding, don’t you? Negative. Taking aim at Tom Friedman’s ever-in-bloom foolishness can sometimes feel like shooting at the side of a barn, and one would rather leave it. But sometimes … Well, sometimes the guy simply rocks, as some of us say.