"We had to replace the lyrics 'ugg-a-wugg'": Meet the "Native American consultant" who worked on NBC's "Peter Pan"

Salon talked to Jerod Tate about how NBC smoothed over the musical's un-p.c. edges 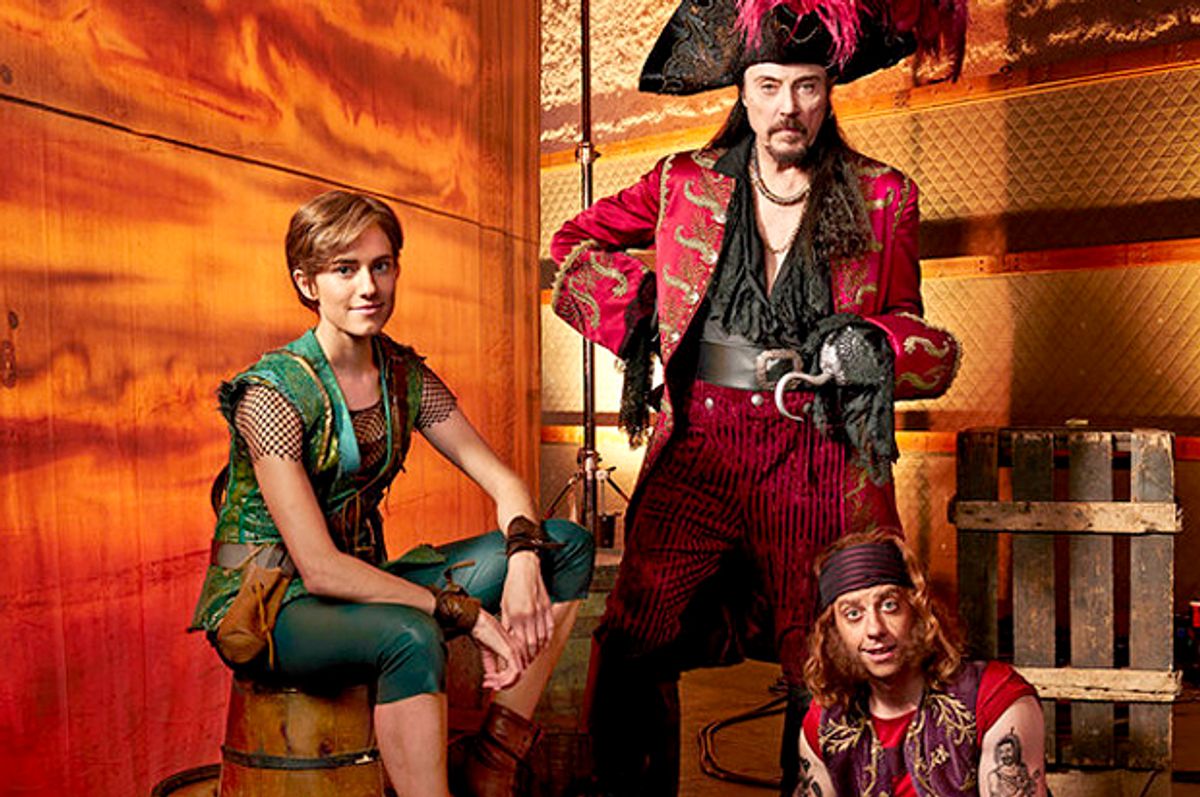 Earlier this week, NBC announced several changes to the music for its upcoming live televised production of the musical “Peter Pan," scheduled to air live on Dec. 4. Allison Williams will play the title role, with Christopher Walken as his nemesis Captain Hook. To refresh the 1954 musical adaptation of J.M. Barrie's Edwardian novel, the production team brought on original lyricist Adolph Green’s daughter, Tony Award-nominee composer Amanda Green, to bulk up the score with songs selected from the original composers’ back catalogs, and to refresh some existing material. One of the changes answers the question many fans of the musical have had since the NBC production was announced: “what are they going to do about ‘Ugg-a-Wugg’?”

If it’s been a while since you’ve seen the show, “Ugg-a-Wugg” is a duet between Peter Pan and the Native American princess Tiger Lily, with the Lost Boys and Tiger Lily’s tribe as the chorus. The two families are forming a pact to warn or save each other from Captain Hook’s pirate gang using a code word: “ugg-a-wugg." The song is widely considered to employ outdated stereotypes about American Indian language and culture, both musically and lyrically.

Here’s a clip from “Cathy Rigby Is Peter Pan”:

Executive producer Neil Meron told Entertainment Weekly that “Amanda has consulted with our Native American consultant [Jerod Tate], just in terms of replacing ‘Ugg-a-Wugg’ with something more traditionally Native American — which has been approved by them and the rights holders.”

What does a “Native American consultant” do in musical theater? We reached out to Jerod Impichchaachaaha' Tate, an Emmy Award-winning classical composer and the artistic director of the Chickasaw Chamber Music Festival, to find out. He spoke with us by phone from his office in Oklahoma.

How did you get involved in this project?

I am a classical composer and I’m a Chickasaw Indian from Oklahoma. I was recommended by several professional American Indians in the industry from around the country. After I interviewed with NBC, they decided to bring me on board.

Have you done this kind of consultant work before?

Not exactly like this. It was really interesting. What NBC is doing, I’ve never heard of, to go into a musical and tidy up elements of it they felt needed to be addressed. This is kind of a unique event. So none of us have done this.

It is pretty rare, right? The rights can be restrictive about this sort of thing, and you’re sort of stuck between performing a show that has some outdated, maybe unsavory and stereotypical things in it, or not performing the show?

Yeah. And my experience is that when we look at stuff that was done 100 years ago, there’s a lot of stuff that’s not necessarily—I’m never really offended by anything, but if you think about how of the times it was, I haven’t seen anything cleaned up. They’re archived, and they’re not really presented anymore. For instance, if you look at the original talkie movie, “The Jazz Singer,” starring Al Jolson. It was about a Jewish singer, entertainer, who was seeking a living and his family didn’t understand what he was doing, and so it was a personal journey of fulfilling your dream as an entertainer in the United States. And here’s this Jewish guy and he does minstrel shows. He puts on black makeup and white lipstick. Obviously, [it’s] extremely culturally inappropriate. But it’s still revered as a historical document and event, and so people try to see it with filters and an understanding of the times. But it’s not going to be shown in theaters anymore. That’s not going to happen.

It can’t be looked at as pure entertainment anymore, it becomes academic?

Rarely do you see something edited, I guess, like this circumstance. From what I understand, I don’t know all the details, but there are other elements in the musical that don’t deal with American Indians, that were also tidied up a bit and retreated.

There are several songs that are being added or revised. But the stories coming out about this are really focused on the changes to “Ugg-a-Wugg.” Because people have been wondering: How are you going to do the “Ugg-a-Wugg” song?

I'll tell you exactly what I helped address. There were three things that I was able to bring to the table to help reconstitute the piece.

But it moves that rhythm from being generic, and so stereotypical, to something specific, and therefore authentic?

The next example is what I call the “Indian Breakdown.” In the “Ugg-a-Wugg” song — it’s a really campy, British musical theater song, and then it has the “Indian Breakdown,” where you have that tune that goes [hums the musical interlude]. It’s this stereotypical, Indian-sounding thing. We were kind of looking for different tunes, but it doesn’t matter what tune you use because the flavor of it is that stereotypical Indian sound. So the musical director was brilliant. He added some different rhythms that were — he flavored it in a way that sounded more entertaining than specific. He kind of veiled it, I guess, a little bit, with some fun rhythms that sound more party-like. I think he had a great solution for that. I thought it was right on the target.

And then the really big thing that we worked on was the replacement of [the lyrics] “ugg-a-wugg.” Just a little background: In general, what we all know is that the Indian tribe that’s represented in Peter Pan was influenced by knowledge of Northeast Indians of the United States. So we’re talking Iroquois, Huron, Wyandotte, Algonquin, these kinds of cultural regions. So what I did was I set out to find a replacement word for “ugg-a-wugg” that was literally a Wyandotte word.

The actual words haven’t been revealed yet, so I’m not going to tell you the actual words that replaced it. But a little more background: “ugg-a-wugg” — again, remember, this is a British musical theater piece, so we had people from across the pond who were thinking very stereotypically and — it was very uniformed. I don’t think there were any bad intentions or malice or anything like that. It wasn’t like that. It was just uninformed. They didn’t know anything about Northeast Indian culture. So when Tiger Lily and Peter Pan, they’re securing a way, when they’re going to attack Captain Hook, they’re looking for a call-out word if there’s trouble. They decide that the word would be “ugg-a-wugg.” It [supposedly] means “danger” or “come here” or something like that. So I set out to find a traditional Wyandotte word that meant “come here,” and we found it. And it works beautifully. So the music doesn’t have to change, we just changed the lyric. It’s 100 percent authentic Wyandotte language, and so it’s accurate and it makes sense.

In addition to that, within the “Ugg-a-Wugg” song, there’s a lot of more stereotypical, nonsensical syllables. The music director again made a great, a brilliant move to replace those syllables with nursery rhymes that already exist. So the song is supposed to sound nonsensical, but what we did was find authentic Indian language to put in there and replacing the kind of uninformed elementary syllables [the original composers] put in there with nursery rhymes. It was a brilliant solution.

Exactly. And that’s the thing: “Peter Pan” is a children’s story. I thought that solution was dead-on because it keeps it childlike when you put nursery rhymes in there. I appreciated their thinking about that. So the music itself is still intact. It’s the original compositions and we wanted to honor that fact. We brought in just the right amount of authenticity without compromising the integrity of the original compositions.

Did you just work on the music, or did you consult on the costumes and the visuals?

No, I just worked on the music. Mostly, I did the research on the language. And of course the reason why I was brought on board is that I know who to talk to [in order] to find authentic words. I have my network. Indian country is a small group of people and I knew who to talk to. But also my knowledge of musical theater and theater in general is very extensive because I was brought up with that, so I knew how to do what I just explained. My personal experiences in my life made me able to do that for them.

The team is saying that they hope these changes will move forward with the musical in the future. Are you happy with how they turned out, and would you be happy with that as a result?

We don’t get to say that very often, that people made all the right moves?

That’s a good way to say it, that they made all the right moves. I am 100 percent behind what they’re doing. I appreciate it. I don’t think they made it an overblown topic. I feel they were being very genuine about this. And that’s wonderful.

Are you saying that you didn’t feel, then, that they were just trying to preempt criticism?

We respond to public movements, we all do. We all listen. And what I feel is that they simply heard what was being said and genuinely approached it. It’s no different from if you called me and said, you know, “Jerod, I’m really concerned about this project you’re doing. It’s got these elements to it and I’m not sure that’s on.” And I would be like, “Oh, you know, I’m so glad you called me. Let me take a look at this, let’s talk about this and figure it out.” And we find a solution and it’s OK. I feel like [with NBC’s team] it was a natural and genuine circumstance. I don’t feel like it was overly political. I don’t think they were just trying to save their image. I think it was very genuine.