"Women in music have bigger balls anyway": A history of public responses from women bashed by Eminem lyrics

Today, Iggy Azalea lashed out at the rapper after his new song included lyrics about raping her 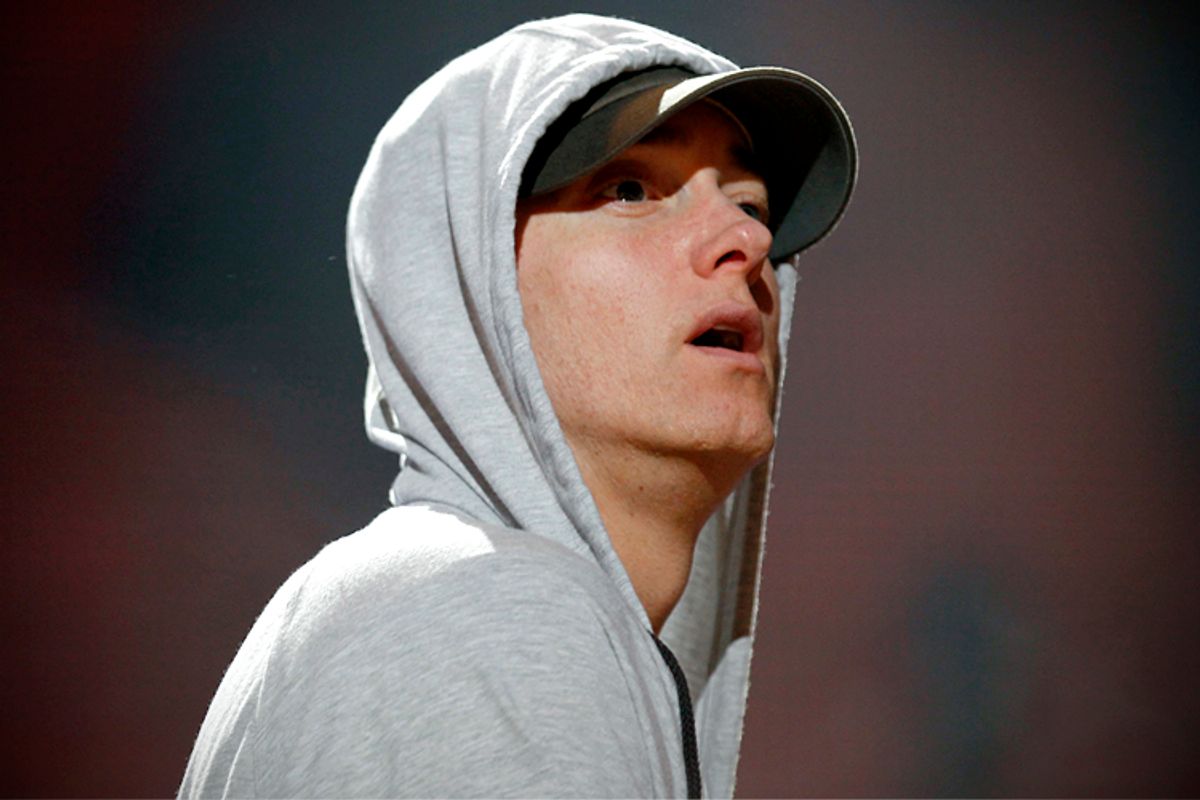 Eminem has a long and storied history of dissing other celebrities in his music (the Atlantic has a pretty comprehensive overview here). While the disses are sometimes playful, they are often concerning, particularly when it comes to Eminem’s long and outspoken history of misogyny and threatening violence against women.

Shortly after he released a track saying he’d like to "punch Lana Del Rey right in the face twice" — Del Rey has yet to respond — Iggy Azalea became the rapper's latest target on his song “Vegas,” on which he raps “If I let you run alongside the Humvee. Unless you’re Nicki [Minaj], grab you by the wrist, let’s ski. So what’s it gon’ be? Put that s**t away Iggy. You don’t wanna blow that rape whistle on me. Scream! I love it. ‘Fore I get lost with the gettin’ off.”

But not every woman who has been a target of Eminem’s verbal abuse has been so vocal in her response. Over the years, famous women have reacted in various ways to Eminem’s misogyny, with some responding with public statements or diss tracks, while others have ignored it, refused to dignify it with a response or brushed it off as jest. Here’s a history of how some women have dealt with being targeted by rap’s king of misogyny over the years:

"Got pissed off and ripped Pamela Lee's tits off and smacked her so hard I knocked her clothes backwards like Kris Kross.” (“My Name is,” 1999)

"Y'all act like you never seen a white person before, Jaws all on the floor like Pam and Tommy just burst in the door, And started whooping her ass worse than before” (The Real Slim Shady,” 2000)

Nothing directly to the gross lyrics, although when questioned about Eminem in a 2009 interview with DJ Whoo Kid about whether she found Eminem attractive, she said, simply, ”He’s too much trouble."

"Causin' terror to Christina Aguilera, When I grab her by the hair and drag her across the Sahara” (“Off the Wall” ft. Redman, 2000)

"Christina Aguilera better switch me chairs so I can sit next to Carson Daly and Fred Durst, and hear 'em argue over who she gave head to first. You little bitch, put me on blast on MTV: 'Yeah, he's cute, but I think he's married to Kim, hee-hee!' I should download her audio on MP3 and show the whole world how you gave Eminem VD.” (“The Real Slim Shady,” 2000)

That the lyrics were "disgusting, offensive and, above all, not true.” She denied that she had relations with either Fred Durst or Carson Daly in an interview with MTV. ”He got no nookie. That did not happen, OK? I just want to clear the table right there, and the thing with Carson [Daly] too. Eminem's whole song did not happen, OK? It just didn't, but it's some really crazy stuff that people want to insinuate and people want to say, and it is hurtful.” Christina also released a diss track called "Will the Real Slim Shady Please Shut Up?” spoofing “The Real Slim Shady” with lines like "You all act like you never heard a white person before, His rhymes are a bore, punk kid trying to be hard core.” The pair buried the hatchet with a backstage hug at the VMAs in 2002.

Nothing, but P.Diddy wasn’t too phased — the pair have worked together since.

”Oh, gee, is that supposed to be me? In the video with the goatee? Wow Mariah, I didn't expect you to go balls-out. Bitch, shut the fuck up before I put all them phone calls out you made to my house when you was wildin' out before Nick, when you was on my dick and give you something to smile about.” (2009)

With an angry post from boyfriend Nick Cannon on his blog: “I felt sorry for him because he must really be stuck in the past. Not only has his music not evolved, but also homeboy is still obsessed with my wife, the same female that wouldn't let him get to second base from eight years ago. What type of grown ass man lies about getting with a chick? Only Slim Lamey! LOL! I’m putting this out there now. Marshall Mathers, you need to holler at me... Man to man, let’s meet up and deal with this like adults. So, Miss Marshall, I'm going to make you wish you never spoke my name and regret the ungodly things you said about my wife. Your legacy has now been tainted from this day forth! You will now be known as the rapper who lost to corny-ass Nick Cannon!”

"Holy Toledo, it’s Angelina Jolie, amigo, She told me "Yo, Shady just hand your penis to me, I’ll deep throat." And Brad if you try to stand between us then we’re gonna see, bro, Who was a fantasy. I don’t mean to damage your ego." (“Things get Worse,” 2014)

"Whoa Nelly, Tell Angelina Jolie I’m ready, With petroleum jelly, to smear it all over me belly, And tell her she can hit me on me mobile, me celly. And meet in the salami section of the grocery deli, And maybe we can find us an appropriate telly, A motel 6 or 8 it think they both could be helly." (“Rap City” freestyle, 2009)

"All I know is, I fell asleep and woke up in that Monte Carlo with the ugly Kardashian—Lamar, oh, sorry yo, we done both set the bar low.” (“Berzerk,” 2013)

"Damn, I think Kim Kardashian's a man; she stomped him, just 'cause he asked to put his hands on her massive gluteus maximus again—squeeze then squish it and pass it to a friend.” (“We Made You,” 2009)

Nothing from Khloe, but Kim was pleased by the shoutout. As she wrote on her blog: ”I just saw Eminem's new video for 'We Made You' and he totally spoofs me!! It was a total surprise to me because I had no idea he was going to talk about me in the song. I think this video is so funny! I am a huge Eminem fan and find it flattering that he would rap about me. He's a bit harsh about some other celebrities, but you just have to let it go and have a sense of humor.”

"Six semen samples, 17 strands of hair found at the back of a van after the shoot at Vanity Fair. Hannah Montana, prepare to elope with a can opener and be cut open like cantaloupe on canopy beds.” ( "Underground/Ken Kaniff,” 2009)

No response, although she did tweet at one point after the song came out that Eminem was “a living legend.”

"What the fuck is going on? Who the fuck is Norah Jones? Shady wait a minute, baby, leave the whore alone, Just go up there and be humble and take them awards home.” (“The Conspiracy,” 2003)

"He does not mean to lesbian offend, but Lindsay, please come back to seeing men. Samantha's a two, you're practically a ten – I know you want me girl, in fact I see you grin.” (“We Made You,” 2009)

"Mary-Kate and Ashley used to be so wholesome. Now they're getting older, they're starting to grow bum-bums.” (“Ass Like That,” 2004)

She was clearly not offended as the two collaborated on "The Monster" and "Love the Way You Lie" and toured together this summer.

"You're dumber than Jessica Simpson eating canned tuna"  (“Rain Man," 2004). Eminem also dissed Simpson extensively, along with others, in his video for “We Made You."

“Of course Jess finds it annoying,” a friend of hers said, “but it’s not like she’s the only one who was singled out.”

"I may fight for gay rights, especially if they d--e is more of a knockout than Janay Rice. Play nice? B--ch I'll punch Lana Del Rey right in the face twice, like Ray Rice in broad daylight in the plain sight of the elevator surveillance, 'Til her head is banging on the railing, then celebrate with the Ravens.” (Untitled, 2014)

Nothing yet, although Azealia Banks tweeted in her defense: