When Jessica Simpson and Ozzy Osbourne shared a stage: The most surprising duets in history

Some were train wrecks. Some were strangely brilliant. But all were very weird 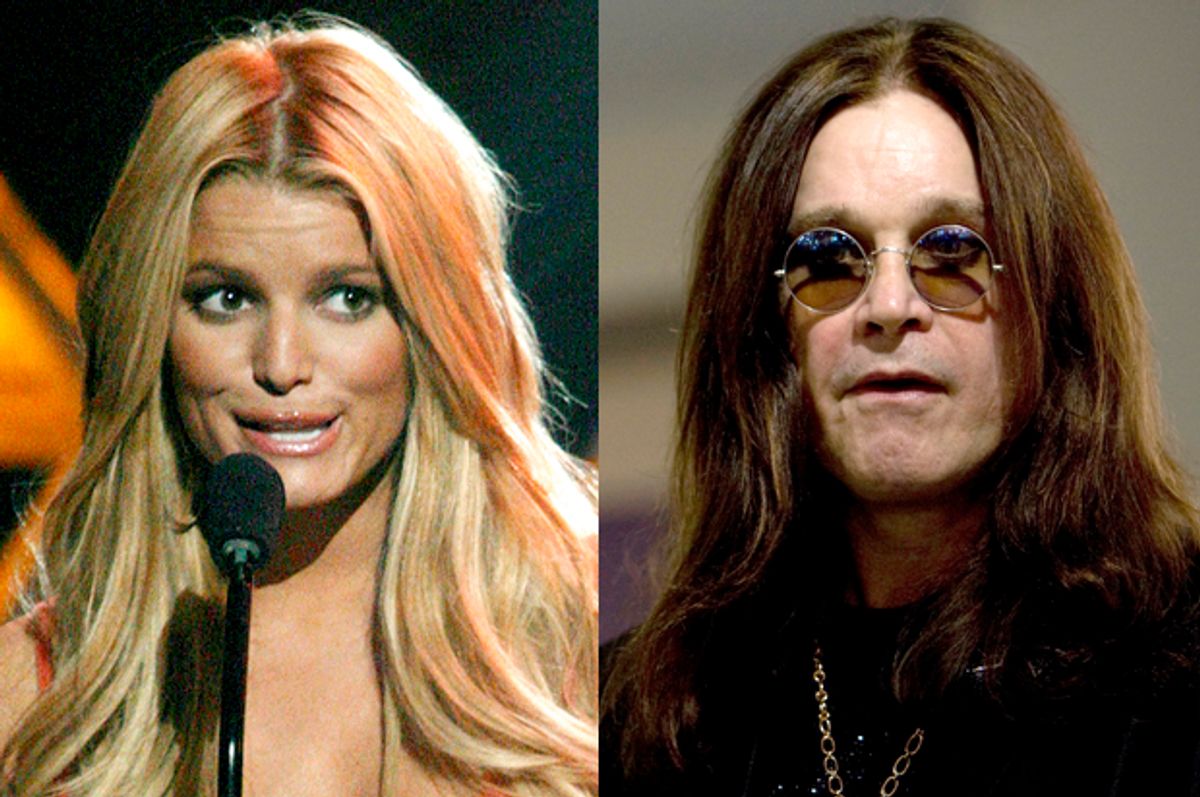 At the Nov. 5 CMA Awards, pop starlet Ariana Grande teamed up with country faves Little Big Town for a performance of the former's hit "Bang Bang." While the execution of the song itself was sound—especially the drum line-assisted backbone—the performance wasn't exactly one anyone saw coming. Of course, there's a long history of surprising duets and collaborations within rock and pop music—some successful and others… well, not so much. Judge the quality of these 10 unorthodox duets and pairings for yourself.

The notoriously reclusive Perry has been hiding in plain sight in recent years—mainly at San Francisco Giants games—but returned to the stage for the first time in nearly two decades earlier this year with an unlikely group: Los Angeles pop-rockers Eels. Ever the consummate performer, it was like he never left: The former Journey singer thrilled the crowd with renditions of the beloved chestnuts "Open Arms" and "Don't Stop Believin'."

Tammy Wynette and the KLF

British acid house pranksters the KLF were never much for worshipping at the altar of tradition. Even this remix of "Justified and Ancient"—which features elegant vocals from Tammy Wynette—is a gas; the country legend brings a cheeky edge to her singing.

For 2003's "The Osbourne Family Christmas Special," the metal patriarch teamed up with Jessica Simpson for a train-wreck version of the holiday classic "Winter Wonderland." Ozzy's hellhound screech is in full effect, as is Simpson's vibrato-laden pop warble—but when mashed together, the combination is like oil and water.

The "Judgment Night" soundtrack produced some of the most intriguing artist mash-ups of the '90s, from Seattleites Mudhoney and Sir Mix-A-Lot doing a proto-garage jam-out to Biohazard and Onyx's rap-rock touchstone. Perhaps the most unexpected pairing was brainiac Scottish rockers Teenage Fanclub with fellow hip-hop scholars De La Soul, teaming up for the mellow grooves of "Fallin'."

Ke$ha's friendship and musical partnership with Flaming Lips made perfect sense on a frosty cover of the Stone Roses' "Elizabeth My Dear"; the former's ghostly wails and the latter's melancholy psych-folk are ideal bedfellows.

At the time, the R&B slow jam "I'm Your Angel" was a no-brainer. Both artists were on career highs at the time of the No. 1 hit —Dion from the "Titanic" theme song and Kelly because of "I Believe I Can Fly." Only in hindsight did the pairing become odd: Dion moved further into adult contemporary territory and a Vegas residency, while Kelly battled child pornography charges and started making bizarre musical detours such as "Trapped in the Closet."

Rob Zombie's music has never lacked for grooves—which is likely why this horn-peppered cover of the Commodores' "Brick House" is so engaging. Of course, having rapper Trina and Lionel Richie himself adding vocals to the track also doesn't hurt.

Nu-metal's reign led to a slew of bizarre collaborations—such as Christina Aguilera's MTV Video Music Awards performance of "Come On Over" that ended with an appearance from Mr. Red Hat himself, Fred Durst.

Long before Metallica collaborated with Lou Reed, they teamed up with another '60s star: Marianne Faithfull. The smoky-voiced vocalist added creepy undead crooning to the end of "The Memory Remains"—a perfect coda for the dread-filled song.