From Stuff White People Like to #NotYourShield: How irony is killing activism 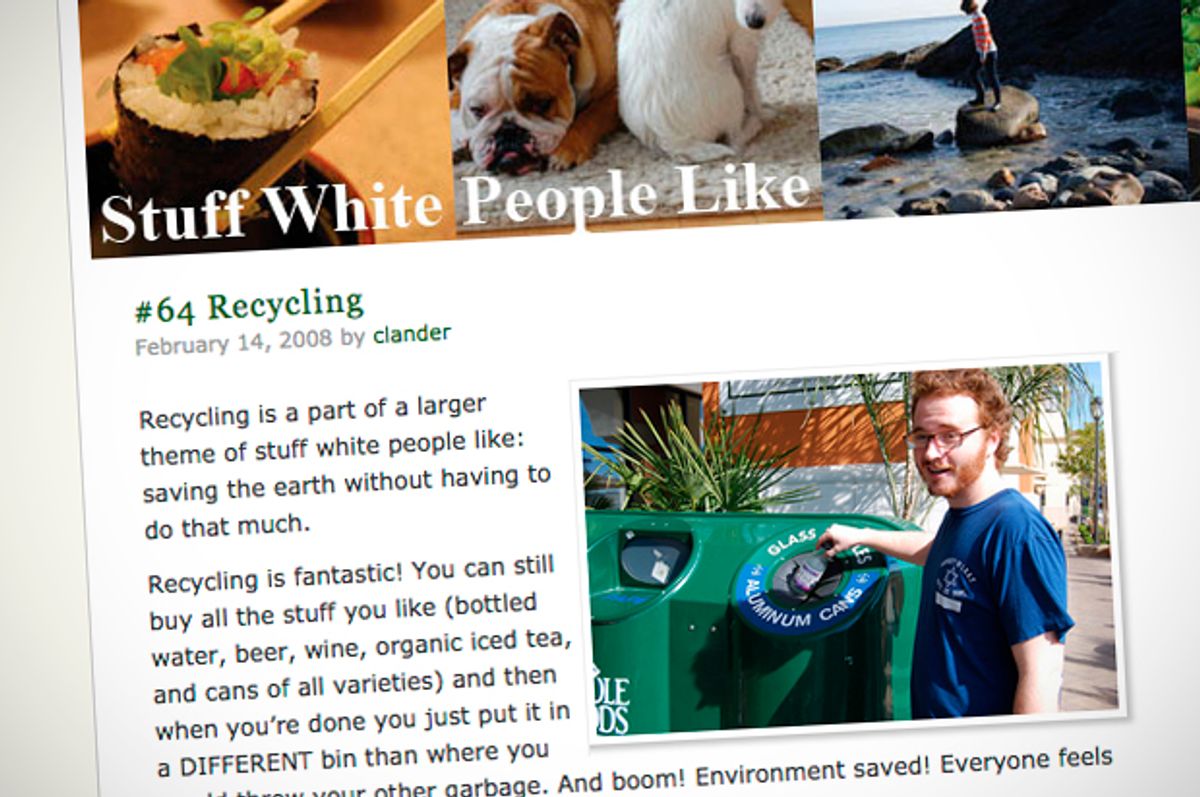 I used to be a fan of the Stuff White People Like blog back in the day -- I would even quote it to my then-girlfriend-now-wife in order to embarrass her, since she falls squarely within the “endlessly self-criticizing liberal upper-middle-class white person” stereotype the blog was made to lampoon.

Christian Lander, the creator of the blog, seems like a decent guy. Certainly from reading SWPL from beginning to end I’m fairly certain he shares my politics, that he sees himself as a leftist commenting on his fellow leftists. I have no personal beef with him, or with the creators and cast of "Portlandia" or "Girls," the spiritual sequels to SWPL. (OK, I have kind of a problem with Lena Dunham, but that’s a whole other column. One that, in fact, several other people have already written, so I won’t bother with it here.)

If Mr. Lander reads this, I apologize profusely. I’m sure we’d get along great if we met in real life. It pains me to say it, but I think Christian Lander -- and his colleagues in the “mocking effete white liberals” business -- are seriously damaging the culture at large.

Because whether he meant to or not, the SWPL formula updated the old “limousine liberal” stereotype for the digital age, and it’s an extremely powerful, tenacious stereotype once invoked. He made a formula out of shaming the powerful for giving a shit about the powerless. He made being a white person who gives a shit about their own racism seem pathetic, and self-serving, and fake.

Christian Lander gave a great gift to the right. He made giving a shit seem silly. He popularized a rhetorical stance that makes people feel worried about caring too much about their values in public lest they get mocked as vain blowhards. And nothing makes proponents of the status quo happier than that.

Like most effective mudslinging, it’s rooted in truth. Lander was criticizing something genuinely problematic he saw among white anti-racist liberals -- or male feminists, or wealthy people who fight against poverty, or straight allies of LGBT people.

And so you get people investing a great deal of earnestness in very shallow gestures. Turning your profile photo green to support dissidents in Iran. Wearing a rainbow flag pin as a show of “support” for suicidal closeted gay teenagers. Proudly displaying a bumper sticker saying you voted for Obama in 2008. Hovering around members of oppressed groups with a hungry look on your face, desperate for affirmation and absolution, generally being annoying and getting in the way while doing little that’s of actual use.

We know that stereotype. I’ve been on both ends of it: rolling my eyes with well-meaning white people trying to “help,” and being the clueless guy thinking I can “help” in conversations about feminism. I’ve written before, at length, about why being a male feminist is really hard and prone to constant fuck-ups.

But you know what? Yes, it’s really, really hard to be a “good ally.” It’s quite a bit easier to pretend to try to be a “good ally” and get brownie points. But even that amount of effort of being a fake ally is still more effort than sitting back, lifting your lip in a sneer and indulging in ironic mockery of other people’s fakeness.

Not in the sense that a movement is only legitimized if a white person joins it or that we need white people to be cool-headed leaders because we’re “too close to the issue” or any of that BS. But in the simple practical sense. Oppressed and marginalized groups already deal with the burden of being oppressed and marginalized. A fight to redress an imbalance of power in society can’t succeed for long if 100 percent of the burden falls on the people who lack power.

So what’s a really, really effective way to strangle any movement for change in the crib? The two-pronged approach of mocking privileged people for their pious hypocrisy in joining it and then letting marginalized people, once they have to stand alone, sink under the weight of being marginalized.

Take the Gamergate debacle. (Yes, you knew I was going there eventually).

Unfortunately, there are few relationships in our society more fraught with muddled signals and ulterior motives and bad faith than the way men and women who don’t know each other well interact. Yes, there are way too many “male feminists” who see spouting their feminist bona fides as a way to boost their status, assuage their guilt and, yes, get laid. Yes, the term “white knight” was invented to describe a real behavior -- men barging in to defend women and then take ownership of the interaction so they can get all the credit for “rescuing” them -- that is negative and worthy of being mocked.

But when women in the gaming industry are being viciously attacked and harassed by an angry mob and men who try to meet the basic lower bound of human decency by speaking up against it get slammed as “white knights” who are “just trying to get in her pants,” well …

Snark works. No one likes to be the object of it. Especially when it’s tearing down a hypocrisy that you’re all too aware of; how many guys who are into feminism aren’t, at this point, aware of how negative the “white knight” stereotype is?

So in the aggregate it discourages guys from speaking out; it makes it that much easier for a guy to say “This isn’t my business” or “I don’t want to get involved.” And in the aggregate it makes it easier for women to get disproportionate harassment without resistance, and forces women to bear more of the burden of speaking out. And silencing women in the industry gets that much easier.

Gamergate is fully aware of the power of SWPL snark to skewer, deflect and demoralize allies joining social movements. They’ve fully weaponized it, with the #NotYourShield hashtag, whose purpose is to parade around the diversity of voices in Gamergate while accusing “anti-Gamergate” of being homogeneous privileged white guys.

The gist is that the white male “trust-fund kids” who dominate progressivism are merely using people of color and women as “shields” for their own hidden agenda, that those of us who care about racism because of our own race or care about sexism because of our own sex don’t exist. If you can reduce the whole thing down to “white guilt” and laugh white guilt off the stage with SWPL jokes, you’ve won.

Which sucks, because it bears no relationship to reality. Especially in the gaming world, where it’s nearly always the voice of a woman or a person of color bringing light to some issue and taking enormous amounts of flak for it before the white-male-led media jumps on the bandwagon.

Who broke the story on the racist imagery in the trailer for "Resident Evil 5" before any of the white dudes at major gaming outlets? N’Gai Croal, a black man writing for Newsweek. Who raised similar complaints about the trailer for "Far Cry 4" and got mostly ignored by the gaming media but buried by abuse on Twitter for it? Veerender Jubal, a Sikh -- and the creator of the #StopGamerGate2014 hashtag.

The creator of the "I Need Diverse Games" hashtag and online community? A black woman. The person who raised the alarm about the good-old-boys network in games writing after GiantBomb’s hiring decisions in May, and tried to start an actual discussion about “ethics in games journalism” months before Gamergate, only to get harassed out of gaming journalism for her trouble? A woman (not linked, to spare her further harassment).

And the SWPL-inspired tactics of mocking “white guilt” and “white knights” that NotYourShield is based on are aimed at eroding what little shield we have. And it’s working, judging by the cowardly silence coming from most of the games industry about the damage Gamergate has done.

It’s based on a real, legitimate fear: the fact that all too often allies invited into our movements silence us, dominate us and co-opt us, because having good intentions doesn’t magically erase the habits of a lifetime of privilege.

But the people who cynically co-opt that fear to attack movements for change -- as Lander’s work has generally been co-opted by sneering reactionaries -- propose an alternative that’s even worse. That in the name of authenticity we demand that marginalized groups stand entirely alone, to sink or swim by their own strength.

And when their strength fails -- when the burden of having to spend your life fighting a constant uphill battle becomes too much, you find yourself exhausted and pissed-off and decide that you personally don’t give a shit anymore …

Well, then, the critics can point to all the marginalized people throwing up their hands and walking away from activism, deciding that they’re doing well enough on their own and solidarity just isn’t worth it anymore, and give the people walking away a catchy name like “#WomenAgainstFeminism” or “#NotYourShield,” and claim that the problem activists were trying to solve was never real in the first place.

It’s as insidious and effective as it is tiresomely predictable.

So that’s why I don’t particularly have time for cutting snark about smug, self-satisfied, clueless liberals, even though I frequently agree with the sentiment and cringe along with the crowd when someone “goes Tumblr SJW” in a foolish way in public.

But I’d still rather take a dozen of the most cringeworthy, ham-fisted, dumb-as-hell white liberals who nonetheless actually care about racism and are actually trying to be better over any cutting ironic satirist ruthlessly mocking their hypocrisies.

I want white people’s sympathy and help when it comes to issues of race, even when they screw up royally, because it’s only by trying and failing that we get better. I’m not giving up on my own trying to be a male ally to women or a straight ally to LGBT people, even though I’ve screwed up a ton in the past and I know I will in the future, because the screw-ups are still worth a thousand times all the above-it-all irony I used to dish out about the futility of earnest activism.

So no thanks to #NotYourShield and the sentiment behind it. I’m a shield for my brothers and sisters who need me to be, and they’re mine in return. That’s the only way progress ever gets made, by people standing together for what’s right.

Is that kind of cloying, cliché sentiment part of the Stuff White People Like?