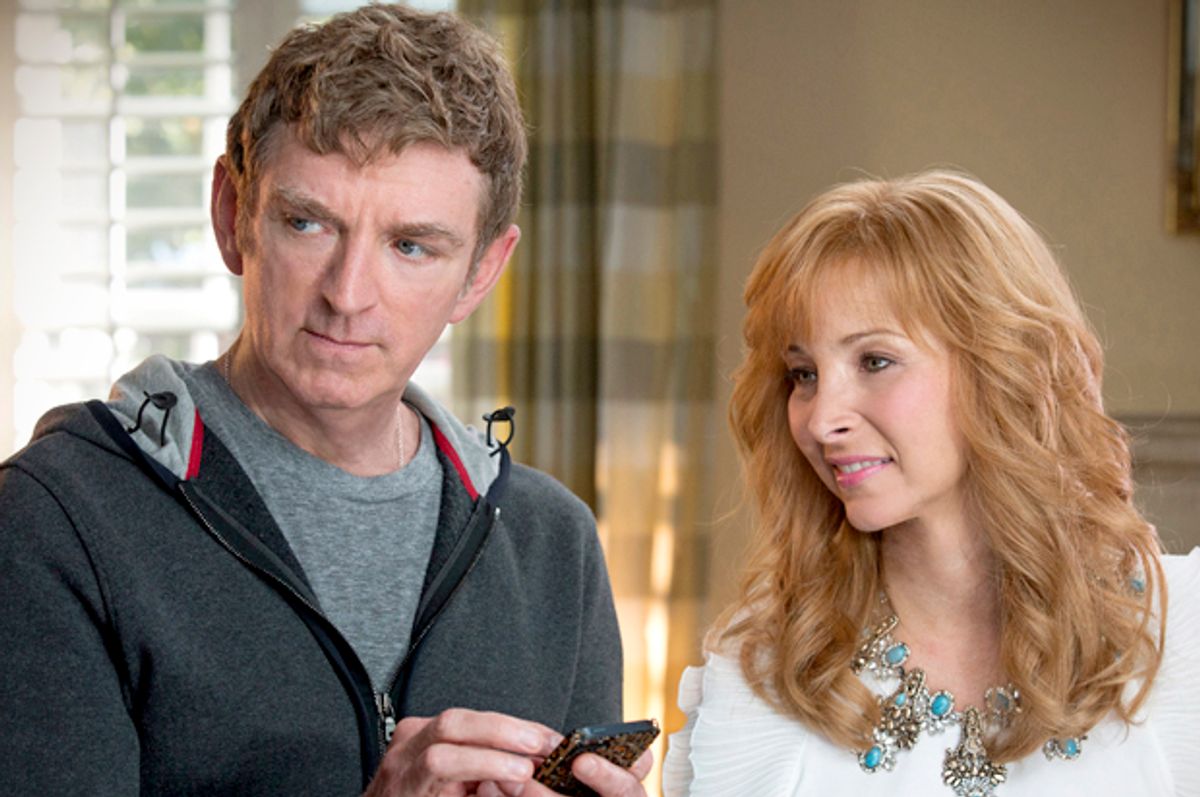 Spoiler alert: This post contains significant plot details for the episode of "The Comeback" airing tonight at 10 p.m. Eastern.

Tonight's episode of “The Comeback,” “Valerie Is Brought to Her Knees,” is one of the most uncomfortably raw episodes of television I’ve seen in a while — a half-hour of such tension that when I wrote about “The Comeback” earlier this month, in anticipation of its second-season premiere, I called the show HBO’s sharpest critique — airing on HBO, no less. “Valerie Is Brought to Her Knees” brings a lot of unsaid tensions about women in the entertainment business front-and-center, mediated through the experience of fictional television has-been Valerie Cherish (Lisa Kudrow). It’s complex and fascinating, and engages with questions about the male entitlement to female bodies, and the female gaze challenging the male.

In case you haven’t been keeping up with the show: Perpetual wannabe Valerie Cherish has been cast in an HBO show called “Seeing Red.” Good news! Except that “Seeing Red” is an account of Valerie’s time on the sitcom “Room and Bored” — and specifically, her run-ins with its chauvinist, bro-y showrunner Paulie G — created, written and directed by, well, Paulie G. Some parts are fictionalized, barely. Others are told from a completely different point of view. And while Valerie is playing herself — “Mallory” — schlubby Paulie G is played by movie star Seth Rogen.

It’s already a situation with complicated dynamics, one where fact and fiction are being confused so much that no one is totally clear about what they’re doing truly means, or really depicts. And when I say “no one,” I mean the producers of the HBO show, the actors involved and even the audience; “The Comeback” draws everyone into the confusion of trying to adapt a “real” story into “authentic” television. (I have completely forgotten that Lance Barber’s slimy Paulie G is not a real HBO showrunner more than once while watching this show — the rest of the show feels so accurate.)

This lack of distinction between real and not-real is the major tension of the blow job scene. Paulie G writes and directs a scene where his character commands Valerie’s character to get on her knees and perform oral sex. It never happened in real life, Valerie keeps telling everyone; it didn’t even come close to happening in real life. But Paulie G is calling the shots, and Paulie G says it’s happening for “Seeing Red.”

It is incredibly disturbing. Paulie G has written a scene where a woman he worked with, and is still working with, sexually services him. As is made abundantly clear in “The Comeback,” Paulie hates Valerie — outright despises her. “Seeing Red” is a whole show mostly blaming her for his slide into heroin addiction. They’ve spent their entire working relationship at loggerheads, which has now spanned almost a decade. And he’s responding to that intense dislike by choosing to portray her as giving him oral sex — his way of ultimately humiliating her (which shows a depressing view of both Valerie and sex). Blow jobs aren’t inherently demeaning, but Paulie G intends for it to be demeaning. As he tells Valerie, from behind the camera, when she asks for notes: The entire scene came out of him angrily dismissing her opinions on the last show they worked together on. “When you said that shit, I’d think to myself: Blow me. Blow me, Valerie. Blow me.”

So, let’s recap. Valerie is being forced to act out something she didn’t do for someone who hates her. Every time she tries to elevate it to the level of art — because she is a performer, after all! — her boss makes it abundantly clear that the situation is just for her to be humiliated, as a character and a person. It’s justifiable, on some level, because it’s Paulie G’s show — his vision — his fantasy, which has gotten a lot of funding from HBO to be made “real.” And it has just enough of a veneer of make-believe — it’s all a show! None of it is real! — that it’s allowable.

The person who ends up interrogating Valerie is the woman behind our camera: her producer Jane, a woman, whose interpretation of “Seeing Red” is the female gaze responding to the male. Her interrogation takes the form of a literal question at the beginning of the episode, when the audience is introduced to the idea: “Paulie G wrote a scene where you blow him?” Valerie brushes her concern off. Actors often have to be out of their comfort zone. “I once played a brunette with migraines,” she says, with no trace of irony.

But the upcoming scene is clearly bothering her, and as it grows in her consciousness, it grows in the audience’s too; an oncoming train that can’t be stopped. Naturally, as we watch, everything keeps getting worse. Paulie G's issues with Valerie are front-and-center in every high-pressure situation; at one point, Seth Rogen makes a joke about Paulie, and then has to step in to stop Paulie from taking it out on Valerie, who’s also in the conversation. Rogen is given free rein to liberally riff off his lines, but Valerie is held to every word, meaning that Rogen is essentially shouting more and more colorful abuse at Valerie while she stands there, mute.

And after being relegated to a mere sex object for Paulie G’s power fantasies, she’s also determined to be found wanting. As Paulie explains it to her: He’s not able to get off during the blow job until he starts fantasizing about two hot naked women joining Valerie. So when they film this fantasy, Valerie is in the middle in her track suit, and two almost pornographically hot women strip naked on either side of her. The entire set goes silent as they’re filmed for a full minute, with everyone just staring, while the women are doing nothing except being watched. Then Paulie says: “Monica and Celeste, I want you to start making the orgasm noises.” The naked women start performing orgasms, on either side of Valerie, until they’re asked to stop. Once they’re dismissed, she whispers to her friend and hairstylist: “That was hell.”

A lot of the power of this episode comes down to Kudrow’s performance as Valerie, a character carefully written to be both clueless and a savant; a woman who understands Hollywood and depends on it to validate her, even if that means utter humiliation in the process. Despite being completely non-self-aware about so much of her behavior, she knows the game of Hollywood. The rules are different for women. “The Comeback” reveals Valerie as a woman who knows that the world isn’t fair but is enthusiastically playing to win anyway, when anyone else sane would have tapped out years ago. And that is indicated, over and over again, by her voicelessness — punctuated by the actual act of the blow job, because you can’t ask questions with a dick in your mouth.

Which is why the climactic moment of the episode is when Valerie finally draws a line, and expresses it in a characteristically bizarre way, but takes a stand, nonetheless. She’s on set for the blow job shoot. Paulie’s direction has been a veiled way of saying, “Just shut up and take it.” And Valerie is fed up. So she looks directly at the camera — that camera that belongs to HBO, being wielded by an asshole — and says, “It’s been a long day. Why don’t you just rape me?”

The set sort of falls to pieces for a bit, as everyone scrambles to respond. And finally, it’s Rogen who saves Valerie — in what is, at least in one interpretation, the worst humiliation.

Throughout the episode, as Valerie’s been ramping up to Scene 27, she’s also been eagerly trying to get Seth Rogen to like her. She buys him first-day flowers and then, as a joke, buys him a ham. He’s clearly flattered and openly tries to be kind to her, which is certainly more than he needs to be, as the star of the show. His decency is a tragic counterpoint to the rapacity of everyone else on set: As Valerie and Paulie G and the two naked girls try to sort out their power dynamics, Rogen is off on the side, making mostly innocuous jokes, checking to see if everyone’s having a good time.

Rogen’s niceness is a quirk of fate — a little turn of the screw in Valerie’s already horrible experience. He could have just as easily been an asshole. As the male lead of the show, the entire crew is fawning over him; he really could do whatever he wanted, and get away with it. As Paulie is trying to regain order on his set, he’s talking Rogen and Valerie through what’s supposed to happen: Rogen’s supposed to push her head down, and grab her hair. Rogen is mildly horrified. “We’re in your head for this, right? … She wanted to do it, like I’m not forcing her to do it, that’s part of the fantasy, right?”

It’s a rhetorical question without an easy answer. The financial realities of the television industry ensure that some fantasies become real, and others don’t; and not every fantasy is terribly pretty. And as Valerie stays silent, two men make a decision about what’s going to happen to her. Nothing quite enforces powerlessness like being saved from a well-meaning person in charge.

“The Comeback” is doing a lot with this one episode; it’s an episode that has a lot of layers with a lot of meaning, and one that is as critical of itself as it is of the industry it’s in. (Michael Patrick King, “The Comeback’s" showrunner, is a white male himself, and the show is a product of HBO, after all.) But it is stunning in its clarity. In just a half-hour it lays bare almost every problem women have in Hollywood — as well as the disturbing notion that most TV executives are a lot more like Barber’s Paulie G than Seth Rogen’s fictionalized version of himself. Seeing this glimpse into how the prestige drama sausage gets made means I’m never going to be able to look at a naked woman on HBO again without thinking about “Valerie Is Brought to Her Knees.”

The episode ends with Valerie’s face awkwardly close to Rogen’s crotch, as he performs some kind of orgasm. She’s out of Paulie’s camera’s frame. But she’s not out of our camera’s frame — or, more important, Jane’s. The look on her face is hard to read. But then she catches sight of Jane’s camera, and smiles, in silent, frozen recognition.