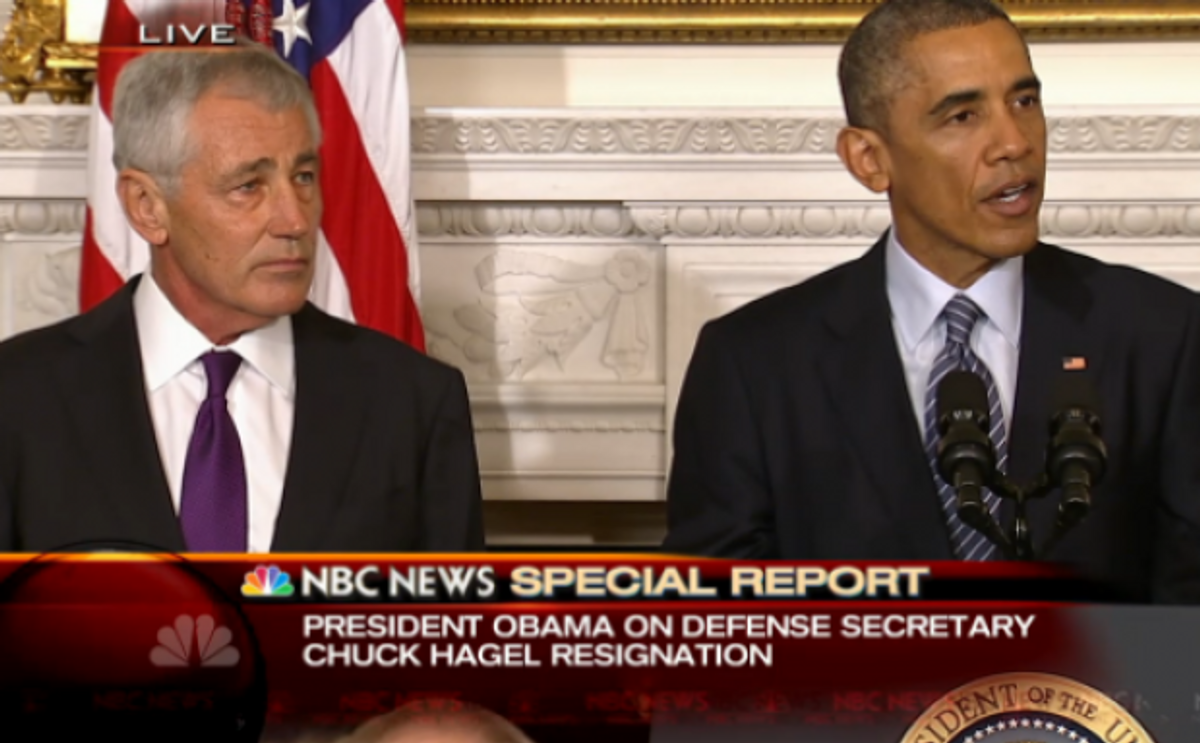 Chuck Hagel: an "exemplary Defense Secretary" or a man who just "wasn't up to the job"?

It's hard to reconcile President Obama's effusive praise for the outgoing Pentagon chief Monday with the scathing accounts of administration insiders. While the president said that he and Hagel had mutually agreed that it was time to move on, Obama administration officials are saying that Hagel was forced out.

"Chuck Hagel has been no ordinary Secretary of Defense," Obama said in a White House appearance today with Hagel and Vice President Joe Biden. Saying that Hagel, a Vietnam War combat veteran, "understands our men and women in uniform like few others," Obama said that the "exemplary" Hagel had proven a "steady hand" during his nearly two-year tenure at the helm of the Defense Department.

While Hagel was brought on to oversee the American drawdown in Afghanistan and a scaling back in defense spending, Obama applauded Hagel's management of new challenges like the Islamic State militant group (ISIS).

"Thanks to Chuck, our military is on a firmer footing -- engaged in these missions and looking to the future," Obama said. Hagel offered similarly warm sentiments, telling Obama and Biden he was "grateful" for the opportunity to serve and declaring that serving as Defense Secretary ranked as "the greatest privilege of my life."

But for all the chumminess of Monday's ceremony, administration insiders privately portrayed a more acrimonious departure. NBC News reported that Hagel "resigned under pressure amid criticism of the president’s national security team on a series of global issues," including ISIS.

“He wasn’t up to the job," one official told NBC.

"Rather than winding down two wars," as had been expected, "we’re winding up,” one Pentagon official told NBC, referring to the U.S. air war against ISIS in Iraq and Syria.

Meanwhile, Republican Sen. John McCain of Arizona -- who harshly criticized Hagel for his opposition to the Iraq War surge during his 2013 confirmation hearings -- issued a sympathetic statement asserting that Hagel found himself "frustrated" with Obama administration policymaking.

"I know that Chuck was frustrated with aspects of the Administration's national security policy and decision-making process," McCain, the incoming chair of the Senate Armed Services Committee, said. "His predecessors have spoken about the excessive micro-management they faced from the White House and how that made it more difficult to do their jobs successfully. Chuck's situation was no different."

But if his words Monday were any indication, don't look for Hagel to write embarrassing tell-alls like former Defense Secretaries Bob Gates and Leon Panetta.

"I will continue to support you, Mr. President, and the men and women who defend this country — everyday," Hagel said.