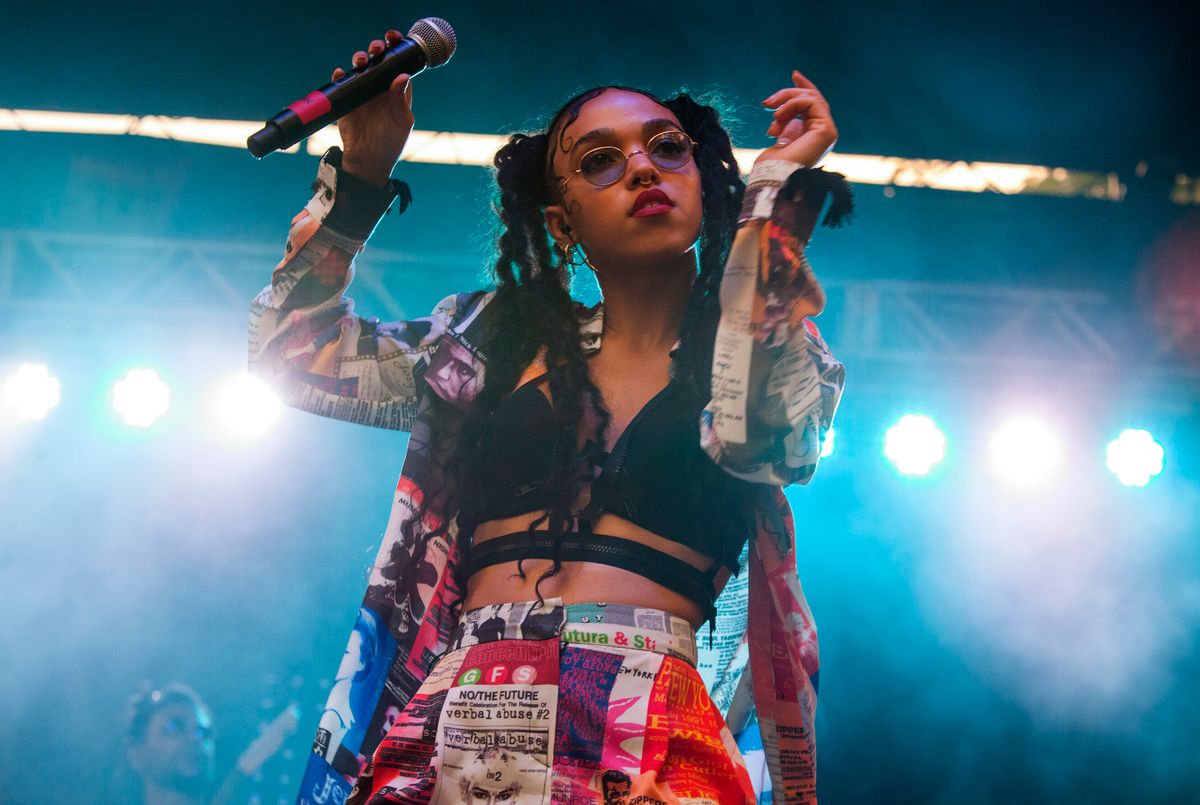 FKA Twigs doesn’t want to be famous. In a recent interview with Rolling Stone, the British indie pop singer (nee Tahliah Barnett) opened up about the harassment and abuse she’s been consistently subjected to online since her relationship with former Twilight star Robert Pattinson hit the Internet. “It makes me feel sick, the thought of being a famous person. It's just not me. I'm the happiest when I'm in the studio, not on a beauty parade,” Barnett tells Rolling Stone.

In September, when the tweets first went viral, Barnett responded with a tweet condemning her critics. The singer said, “I am genuinely shocked at disgusted at the amount of racism that’s infected my account in the past week. Racism is unacceptable in the real world, and it’s unacceptable online.” While pop stars like Selena Gomez have also received harassment (and death threats) for their choice to date the Justin Biebers of the world, Barnett is correct to point out that there’s something different about this trolling. Barnett, who is Jamaican, Spanish, and English by heritage, has been commonly referred to as a “monkey” by her tween trolls. And the tweets just keep coming, even up until a few days ago.

When Barnett started speaking out, the response stopped beating around the bush:

What’s odd about this reaction to the singer’s relationship with Pattinson is that jilted Twilight fans have all but completely retconned their feelings about his romance with Kristen Stewart. While Stewart was widely derided as a “cheating whore” and a “trampire” following their 2012 split (and details going public of Stewart’s affair with her Snow White and the Huntsman director, Rupert Sanders), tweets now refer to Stewart as a “goddess.” Twitter user @strongjawline thinksPattinson’s “taste in girls went from 100 to 0,” while @demiloverbitch concurs: “Kris is beautiful and @fkatwigs is boogeyman.”

If this shows dating Robert Pattinson to be an unwinnable game, it seems Twitter is even more stacked against people of color. Just this week, the popular Dave & Buster’s chain (aka Chuck E. Cheese for adults) caught flack for an insensitive tweet suggesting that “no Juan could hate tacos,” for which they have since apologized. Elsewhere, Albany High School student Kori Dobbs, who is black, was taunted with racial slurs on Twitter after being elected the school’s senior class president. Local news reports that the abuse started after Dobbs was named “Most Likely to Succeed” two weeks prior.

Racial insensitivity on Twitter shouldn’t be new news to anyone who followed the widespread reactions to Zero Dark Thirty after the Kathryn Bigelow-directed film debuted in theaters last year. Although Bigelow is against the war in Iraq, audience members viewed Bigelow’s work as a propagandist celebration of the hunt to kill Osama Bin Laden. Reports are that many audience members cheered when Osama is killed in the film, whereas others took to the Internet to shout their feelings. The consensus? “Zero Dark Thirty makes me hate Muslims.”

A 2012 map from Floating Sheep shows that Twitter racism predominantly correlates with the South (especially Mississippi and Alabama); these are the states that fought to retain the slave trade following emancipation, so it makes sense that residents might have a complicated relationship with race. However, the researchers at Floating Sheep warn: “But lest anyone elsewhere become too complacent, the unfortunate fact is that most states are not immune from this kind of activity. Racist behavior, particularly directed at African Americans in the U.S., is all too easy to find both offline and in information space.” According to Floating Sheep, the accessibility of the Internet levels the playing field.

Floating Sheep’s data singled out racist tweets about President Obama, which indicate that certain targets are subjected to abuse more than others. In Obama’s case, that abuse is indicative of a black man holding a position previously only held by old white dudes, and the feeling amongst Obama’s racist critics seems to be that something is being lost, a country in which their power is being taken away.

For Tim Martin at the Times-Standard, that loss is a matter ofsheer demographics:

We live in a country of many different cultures, ethnicities, and mixed races. According to a U.S. Census Bureau report, in the last decade the number of multiracial Americans grew faster than those who self-identify as a single race, with the largest gains coming in the once racially segregated South. … America's white majority is slipping away with increasing speed, affecting issues from immigration to the future of our economy. The Census Bureau noted that the United States is moving toward a ‘minority majority’ population. By 2043, whites are expected to make up less than half of the total U.S. population. The new American ‘us’ is no longer black, white, Asian, or Hispanic. It's all of these and more.

While these changes are often looked at from political vantage points, the FKA Twigs tweets show that there’s a very personal component to racial panic, resulting in renewed fears of miscegenation. Like homophobes who might fear “our men being taken away” by the scourge of same-sex relations, Robert Pattinson dating outside the phenotype pool feels like an attack. It’s one thing when the movie star heartthrob of your dreams dates another woman, reminding you that he’ll never love you. That sting is even worse if the object of his affections happens to be half-black.

If you think that using a bunch of tweets about a celebrity’s love life to make a point about embedded racism in 2014 is overstating the issue, take a look at recent poll data on race mixing. According to a Gallup survey conducted in 2013, 87 percent of Americans approve of interracial relations, up from just 4 percent back in 1958. That sounds like a rosy statistic until you realize that it means 13 percent of Americanscontinue to be against miscegenation. Down in Mississippi, the state Floating Sheep singled out, poll numbers show that half of Republicans believe interracial marriage should be banned outright.

The overall rise in miscegenation’s favorability is largely tied to the Internet era, as less than 20 years ago half of all Americans held unfavorable views race mixing. In particular, younger Americans who have grown up with diversity show much more enlightened views on the issue. But that’s not always the case. Threads on the College Confidential website show a great deal of anxiety around the issue, where many students report concerns about the prevalence of interracial dating at their campuses. USA Today’s Melissa Romero reports that during college, she frequently got asked questions like, “Is your boyfriend Filipino, too?” Romero responds, “Let’s get real, people: No one would ever ask someone, “Is your girlfriend white, too?”

This is just one of many examples of the not-so-subtle stigma that interracial couples face. In an essay for the Daily Beast, Keli Goff reminds us, “We’ve come a long way as a country, but challenges for mixed-race couples remain.” Goff continues, “At a recent dinner party a white guest mentioned how frustrating it is to hear how his wife was treated one way at a store or in other customer service settings before his arrival, and another way once he appears. She is black. And there are still houses of worship in which interracial couples are not welcome. In 2009, in the second term of the country’s first mixed-race president, a justice of the peace declined to grant an interracial couple a marriage license.”

Whether it’s in real life or on the Internet, where prejudice can be favorited by your Twitter followers, there will always be an audience ready to share and affirm your racial biases. While being disgusting and morally reprehensible, it’s not surprising that teens are reacting to Robert Pattinson’s choice in girlfriend with virulent racism. It’s surprising that, with all of the evidence out there, we again have to be reminded that prejudice continues to exist. As long as there are people who feel like they have something to lose, there will continue be a platform for it.