Who will win the Darren Wilson interview? We rank the contenders 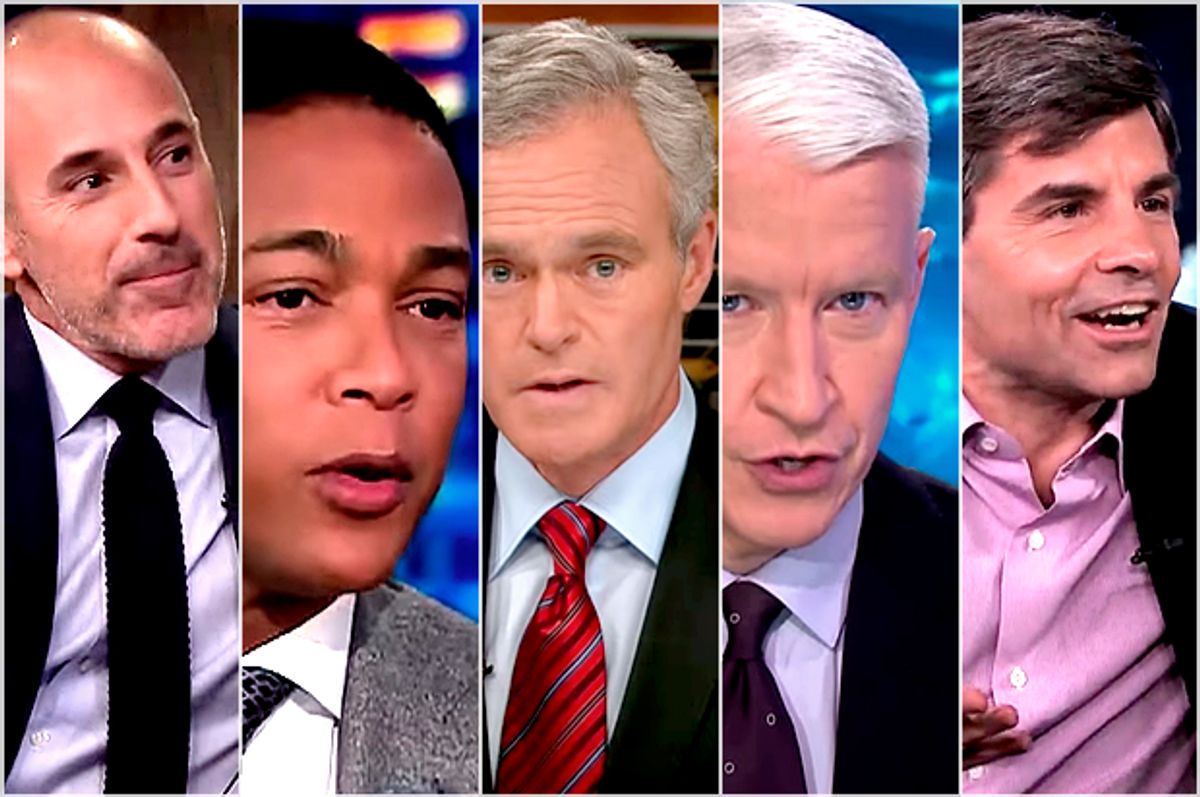 CNN’s Brian Stelter of “Reliable Sources” is reporting that Officer Darren Wilson met quietly with several news anchors in Ferguson, Missouri, recently to audition candidates for an exclusive televised interview. Wilson is apparently preparing for the release of a grand jury report on the shooting death of Michael Brown, the unarmed black teenager shot by Wilson during an altercation in August. According to Stelter, the five main candidates appear to be NBC’s Matt Lauer, Scott Pelley of CBS News, ABC’s George Stephanopolous, and CNN’s Anderson Cooper and Don Lemon.

Competition is fierce for an exclusive of this sort. It’s interesting that Wilson doesn’t appear to be talking to any Fox News anchors, aiming instead straight for the mainstream with shows like Today, CBS Evening News and ABC’s This Week. Cooper and Lemon are the only two candidates from the same network. It’s hard to say which anchor would present Wilson in the most sympathetic light, regardless of the grand jury’s decision, but here’s a very speculative, entirely hypothetical ranking of most-likely to –least, based on a review of recent controversial interviews.

When Deen needed to apologize on air for her racist comments, she went to Matt Lauer. The Today show host also interviewed Trayvon Martin’s parents, only days after a jury found George Zimmerman not guilty of murdering the unarmed Florida teenager. In the interview, he seems intently focused on the legalities of the case, not the emotional fall-out for the family or the sociopolitical ramifications of the verdict. Lauer’s calm demeanor is borderline robotic in the context of speaking with bereaved parents. He grills Martin’s father on the possibility that race played a part in Trayvon’s death and in Zimmerman’s acquittal. “Obviously, they tried their hardest,” Lauer says in defense of the jurors, and he calls out potentially violent protests without mentioning peaceful vigils. Lauer also asks Martin’s parents, essentially, whether it’s fair that Zimmerman had to go into hiding following the verdict: “Do you think that’s what the system intends for someone who is acquitted of charges like these?” Especially if the grand jury fails to bring charges, a Lauer interview is a solid bet for Wilson.

Cooper scored the exclusive interview with the Los Angeles Clippers owner after he was banned from the NBA for life and fined $2.5 million for racist comments recorded and released by his girlfriend earlier this year. “If I said anything wrong, I’m sorry,” said Sterling, as Cooper makes eye contact with a concerned, furrowed brow. “I’m so sorry, I’m so apologetic,” Sterling continues, claiming that he’s not a racist. Cooper doesn’t push back on Sterling’s claims that he was baited into making the comments in the first place. Cooper lets Sterling keep the focus on his own feelings about the controversy throughout much of the interview, suggesting that he could be the right anchor to facilitate an emotional Wilson appeal to potentially-sympathetic ears.

Stephanopolous interviewed the Russian president during his “charm offensive” before the Sochi winter Olympic games. Stephanopolous doesn’t shy away from pointed questions about corruption, but he also goes on a charm offensive of his own, grinning a bit when he brings up asylum-seeker and NSA leaker Edward Snowden (“Is he invited to Sochi?”) and asking about side bets with Obama, offering Putin some moments to appear slightly less vampiric than usual. Stephanopolous is a good gamble for a well-rounded, balanced interview—Wilson won’t get to set all of the terms, but neither is it likely that he’ll be expected to be on the defensive throughout the entire exchange.

The significance of the only black journalist on the short-list can’t be lost on CNN’s Lemon or on Wilson. Lemon’s coverage on the ground in Ferguson has been noteworthy, too, including his contentious exchange with rapper and activist Talib Kweli and being manhandled on-camera by a police officer while reporting on the front line of the protests. He once did a relatively tough interview with Michael Jackson's doctor Conrad Murray, and destroyed Donald Sterling's lawyer in another on air segment. Despite his thorough understanding of the emotional and political climate in Ferguson now, Lemon can be a bit of a livewire in an interview (see his recent interview with and apology to alleged Bill Cosby rape victim Joan Tarshis), and a sit-down with him could be more than Wilson is prepared to handle.

His could be a courtesy invitation—it’s a bad look to talk only to two out of the three major networks—but a “60 Minutes” interview with the venerable CBS anchor could help Wilson reach an older audience who might be more receptive to decisions made by a law enforcement officer in the line of duty. Still, of the candidates, it’s least likely that Pelley will make the impression Wilson needs. Even his softer stories, the “60 Minutes Sports” packages, aren’t soft on redemption seekers like disgraced doping scandal athletes. For a taste of his traditional news style, here he is interviewing John Kerry last year after the Secretary of State met with Iran’s foreign minister last year.