Aimee Mann: "I was under the impression that if I became well known, I would have to back up every line"

EXCLUSIVE: One of our great singer-songwriters shares the skills she learned from Dylan, the Beatles and Neil Young 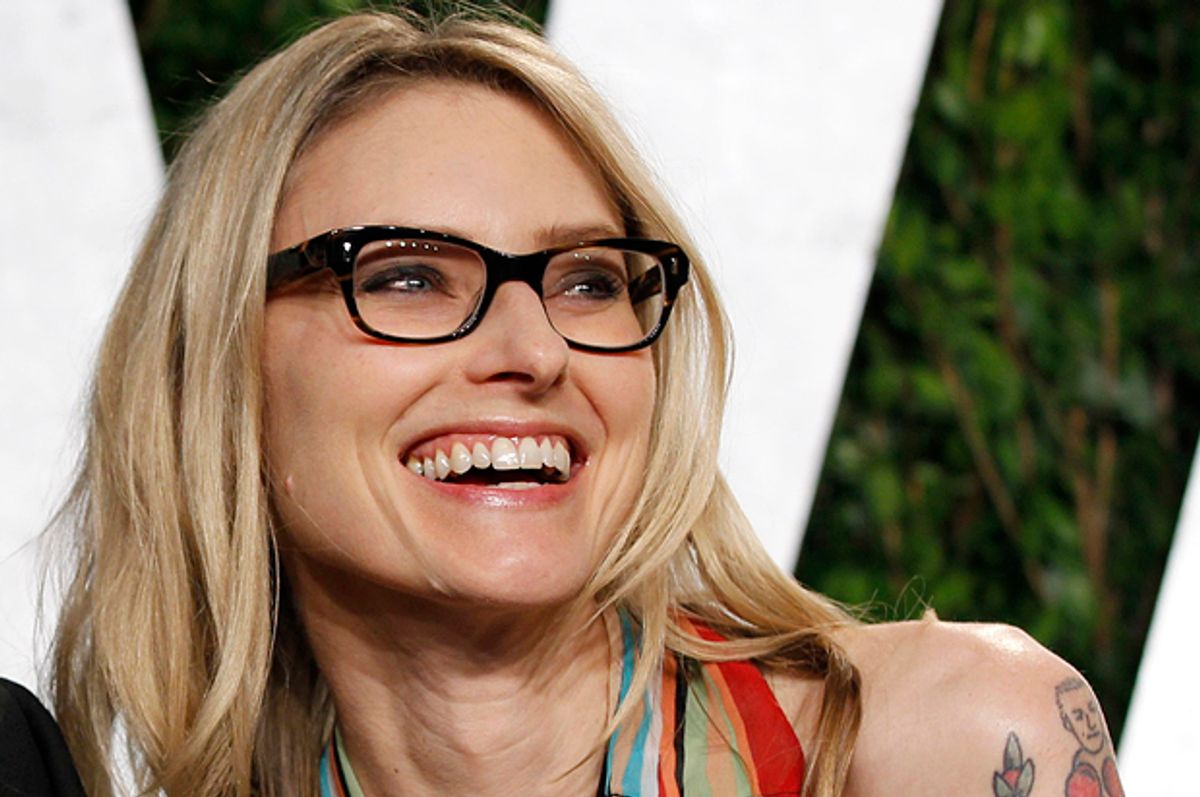 When I was a kid, the first time I really paid attention to lyrics in a different way was the (1972 Gilbert O’Sullivan) song “Alone Again (Naturally),” which was a hit on the radio, and the melody was really nice, I liked the vibe of it, it had a bouncy thing, which was maybe slightly melancholy. And then a friend said, “You know what that’s about, right?” And I said, “No,” and they said, “He’s going to commit suicide.” And that kind of changed the whole thing for me. It was like, for people who wanted to pay attention, there was almost a secret message. If you didn’t want to pay attention, there was this pretty thing, and maybe there was a line or two that stuck out – it would be a different kind of experience. But if you were paying attention, it was hiding in plain sight.

Heretofore, the 11-year old I was had listened to lyrics in a pretty cursory way – sometimes getting them wrong, as people do. I just didn’t get the impression that whoever was writing the song had something definitive to say. Like “I Want to Hold Your Hand” is this very amorphous, whatever – it doesn’t seem like it needs to be paid attention to that much. It doesn’t seem like it’s particularly important to the writer. And here’s what’s key to me – it doesn’t seem like it’s that important to the writer. You don’t get the impression that whoever’s writing this really has something to say or really cares about the thing that they say. Here I am listening to you talk – which is so important – and you’re just not saying anything. You’ve yelled fire in a crowded theater, and there’s no fire.

And that informed the way I was listening to songs. Maybe a little later, when I heard Neil Young … And I think it was a while later before I heard any Dylan, and saw lyrics in yet another way – sort of poetic, but his craftsmanship is really incredible, his choice of language and use of words, specific kinds of words and interesting metaphors ... That was all a revelation.

But the interesting thing for me was: You can talk about stuff, and only the people who care are going to notice. I thought that was really, really intriguing. And that little nugget of thought stayed with me for many years later, when I was trying to write my own songs, that was the ticket. Dylan is an amazing lyric writer. But I got it from that moment of listening to Gilbert O’Sullivan … Suicide, his parents dying, being left at the altar … that’s some heavy shit. In the context of this little pop song. This was intriguing – I thought, at some level, there’s a way to talk about things that you can’t talk about. But you sort of have deniability in a way – because only the people who listen will get it. The encryption key is, a listener who cares.

I was also under the impression – like a kid would be – that if you were a singer-songwriter, and had some level of success or fame, that you would be questioned about your lyrics. It wasn’t enough to know what they were about; you had to be ready to explain them and say, “Well, I was thinking about this,” or, “I was thinking about this person …” Of course, that virtually never happens! But I was under the impression that if I became well known, I would have to back up every line. Some interviews in Japan, people are interested in what every line means, but that was about it. I think that kept me trying to connect with what I wrote, instead of just saying, ‘This rhymes with that, so that’s good enough, so I’ll throw that in, because I really want to do something else …” So even if they weren’t that good, or capable, or poetic, or well-crafted, at least I could say, I meant this – this was the situation, this was what I was feeling.

I think the artist most important to me at an early age was Elton John. I thought the lyrics were really interesting – though I wasn’t always a big Bernie Taupin fan – but you felt there were things going on. Like, “Who’s Daniel?” or, “Where is this person flying to?” There was something about Elton John’s music – his melody, the chords, his singing … it had this kernel of something in it that communicated to me. Whatever he’s feeling, I’m sort of feeling it. God, it’s so hard to talk about … But I can almost picture it. It wasn’t all of his songs, but a lot of his songs had something that resonated with me. And maybe it’s like pain or trauma or anguish or those feelings that resonated with me – I don’t know what it was, but it really locked in. That was probably the first seven records, and then I got off the train. But his music was very meaningful to me. And there was something in the DNA of his melodic structure that I picked up on later and was influenced by.

I listened to [Dylan’s] “Blood on the Tracks” about 50,000 million times. There was a real melodicism to “Tangled Up in Blue”; it’s a real heartbreaking love song. And you got a sense that Dyan had some vulnerability; sometimes you felt like he doesn’t have any vulnerability. And he’s less interesting when he seems like a hardass. That record really… This friend of mine was really into photography and had a darkroom, and we’d sit in his dark, with the smell of the fixer, developing negatives, playing that record over and over.

I listened to the Beatles a lot when I was a little kid, like “Sgt. Pepper’s” …  I didn’t even understand … I’d heard of the Beatles, but I really didn’t pay attention to pop culture at all. I didn’t know that John was really famous. As an 8-year-old I thought that album was by a band called Sgt. Pepper’s Lonely Hearts Club Band. I never read any music magazines. There was one top-40 radio station, so maybe I would hear Badfinger or something. But I wasn’t one of those kids who was trying to play Beatles songs, asking their friends about it … I didn’t know where to find music. A baby sitter had a Neil Young record, so I listened to that. But I discovered Elton John by walking into a record store and saying, “I have my allowance!” It was enough to buy an LP so I picked one at random.

“Sgt. Pepper’s” was a record I played over and over again when I was 8. Their later stuff I didn’t really care for. "Let It Be" and … But my brother played their earlier stuff. I was a big fan of “Help.” I always think, I should go back to Beatles songs, do a chord analysis and maybe learn something from that. But I haven’t done that yet.

Those old [American Songbook] standards definitely have some importance and resonance. And ragtime resonates for me – they use a lot of two-major, which I really like and use a  lot. Scott Joplin stuff. It’s got a real bright… There’s a Beatle-y thing to it, too.

I responded to stuff really emotionally. Almost all the musicians I know would figure out songs, and play along with the records … I could never do that. For me, learning something about music theory and chord structure and chord progressions was the key to understanding things that I was hearing. I didn’t have the ear that other people I knew had, so I needed to have some scaffolding in order to make sense of it. It’s probably why I’m such a fan of very structured songwriting: Verse, pre-chorus, chorus, bridge, tag … I like having these structures out there that I can refer to and use as a guidepost. I can change it, but I can look at it and see if it works for me. I’m really bad with a totally blank page.

I think there’s something to be said for a song that you don’t worry about, where you don’t say, “It’s got to be perfect, I’ve got to sit down and write a single, or write a meaningful song.” You can really block yourself … So I’m totally in favor of [spontaneity], but for me, I kind of need to have a place to start.

I had a vague idea of wanting to do music, to write some songs, I knew they didn’t really work but I couldn’t figure out why. I had graduated high school and was waitressing and really didn’t know what to do. I was working at a bar at the Holiday Inn, in Richmond, Virginia. I think a lot of bars, especially hotels, would have live music – these really great, proficient cover bands. Who would be there for two weeks and then move on to the next Ramada Inn; I don’t really know how it worked but it was interesting and I can’t imagine it happens anymore.

But I became friendly with the bass player, and I’d always wanted to play bass. He showed me a couple of things, it was my introduction to the bass, and he told me about this place called the Berklee College of Music, and said that you didn’t have to audition. At that point, all the music schools were like Juilliard, where you had to already be a real proficient musician. So I investigated, and it turned out you had to audition, but they had a summer session you could attend; that was “Come one, come all.” So I went there and it opened a lot of doors for me. First of all, the ear training – to work on your ear and learn to hear things you’d heretofore not been able to ascertain, individual instruments, chords and where they went, and remember melodies better … I’d just thought, either you could do it or you couldn’t. That plus learning about chord progressions and music theory, and which chords sound good going into other chords … that was really a revelation. Berklee was a jazz school then, but it’s sort of the same thing.

So I started applying that to writing songs. Which were all terrible. But you do it enough, and you get better at it.

Aimee Mann is a longtime singer-songwriter whose most recent album, "The Both," is a collaboration with Ted Leo. In December she tours the East and West Coasts, starting with two dates at L.A.'s Largo. Her full tour dates are here: http://www.aimeemann.com/tour