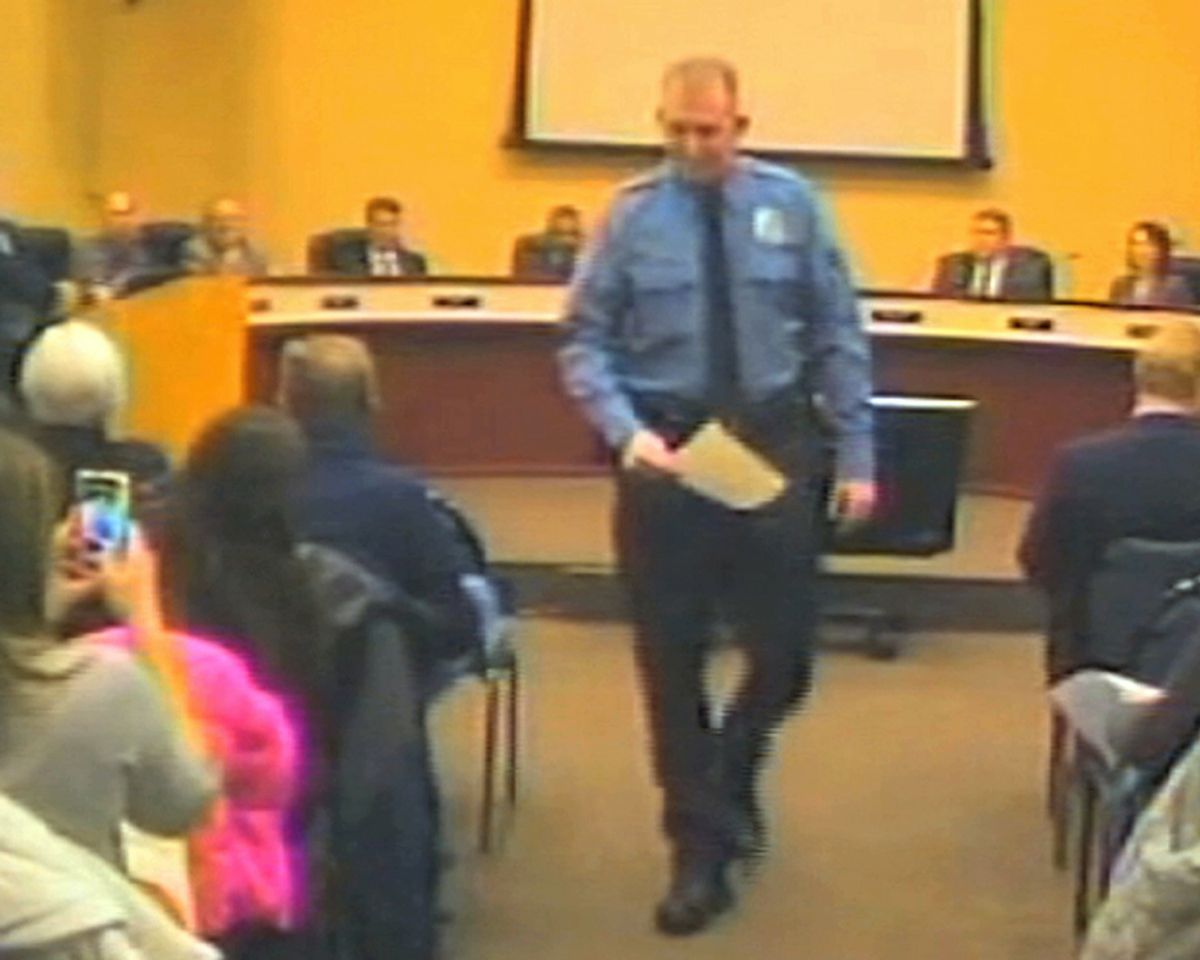 FILE - In this file Feb. 11, 2014 image from video released by the City of Ferguson, Mo., is officer Darren Wilson at a city council meeting in Ferguson. A grand jury said Monday, Nov. 24, 2014 that it has reached a decision about whether to indict Wilsoin in the shooting death of Michael Brown, according to a lawyer for Brown's family. (AP Photo/City of Ferguson) (AP)
--

FERGUSON, Mo. (AP) — A look at some of the key figures in the case of Michael Brown, the black 18-year-old who was shot and killed by a white police officer in August. His death stirred weeks of violent unrest in the St. Louis suburb after the shooting and even more Monday night, after a grand jury decided not to indict the officer.

Michael Brown graduated from Normandy High School last spring and was preparing to attend Vatterott College, where he planned to study to become a heating and air conditioning technician. Friends say he eventually wanted to go into business for himself.

Relatives and friends described Brown, who grew up in a tough neighborhood, as a quiet, gentle giant who stood around 6-foot-3 and weighed nearly 300 pounds. He was unarmed on the day he was killed.

Police said later that he was a suspect in the "strong-arm" robbery of a convenience store moments before the shooting. A family attorney said Brown may have made mistakes but did not deserve to die.

"He was just looking forward to getting on with his life," said his grandmother, Desuirea Harris. "He was on his way."

Some descriptions of Ferguson police Officer Darren Wilson are similar to those of Brown. Both men have been described as gentle and quiet. Police Chief Thomas Jackson said Wilson had no previous complaints against him and a good career record.

"He's devastated," the chief said after naming Wilson as the shooter back in August. "He never intended for this to happen. He is, and has been, an excellent police officer."

Wilson began his career in nearby Jennings before moving to the Ferguson job several years ago. He was placed on paid administrative leave after the shooting.

Thomas Jackson was a police veteran long before he came to Ferguson. He spent more than 30 years with the St. Louis County Police Department, at one point serving as commander of a drug task force. Before that he was a SWAT team supervisor, undercover detective and hostage negotiator.

He heads a department with 53 officers, only three of them black, in a town where nearly 70 percent of the 21,000 residents are African-American.

"I'm constantly trying to recruit African-Americans and other minorities," Jackson has said. "But it's an uphill battle. The minority makeup of this police department is not where I want it to be."

Some of Jackson's actions in the wake of the shooting have drawn criticism, including his decision to announce that Brown was a suspect in the convenience store robbery, a move that stirred anger in Ferguson's black community.

Since his election in 1991, Bob McCulloch has been the top prosecutor in St. Louis County. A Democrat with a reputation for being tough on crime, he comes from a law enforcement family. He was 12 when his father, a police officer, was shot and killed by a black suspect in 1964.

Some critics, including St. Louis County Executive Charlie Dooley, questioned McCulloch's ability to be objective in the Ferguson case. They wondered if the loss of his father in such circumstances creates a built-in bias.

During a 27-year career, Capt. Ron Johnson rose from patrolman to chief of the 11-county division of the Missouri State Highway Patrol that includes St. Louis and its suburbs.

Back in August, Gov. Jay Nixon appointed Johnson to take command of security in Ferguson. That decision came after complaints that authorities were too heavy-handed with protesters, when St. Louis County police were in charge.

Johnson's calm but commanding presence drew high praise from many observers. When Johnson, who is black, walked down the streets of Ferguson with protesters, many demonstrators shook his hand or posed for photos with him. He reminded locals of his Ferguson roots and suggested that he, too, had lessons to learn from the case.

"We all ought to be thanking the Browns for Michael, because Michael's going to make it better for our sons, so they can be better black men," he said in August.

He also apologized to Brown's family.

"I wear this uniform, and I should stand up here and say that I'm sorry," he said.

Events in Ferguson could have a significant effect on the political future of Gov. Jay Nixon, a 58-year-old Democrat.

Nixon drew some criticism in the days immediately after the shooting for keeping a low profile, but he soon moved to the forefront, putting state police in charge of security and then calling in the National Guard to help quell the violence.

Benjamin Crump became a national figure when he represented the family of Trayvon Martin, the Florida teenager fatally shot by a neighborhood-watch organizer in 2012. Now he is back in the spotlight, representing Brown's family in another racially charged death.

Crump, 44, was born in North Carolina, one of nine children. Now based in Tallahassee, Florida, he seems to fight back his own emotions as he talks about the loss suffered by Brown's parents.

"I don't want to sugarcoat it," Crump said in August. Brown "was executed in broad daylight."

Two days after the shooting, Holder said the case deserved a full review and dispatched a Justice Department team to Ferguson to try to calm tensions. The department soon launched its own civil rights investigation.

Holder ordered a federal medical examiner to perform a third autopsy on Brown and called the Brown family to express his condolences. He said aggressively pursuing these types of investigations is "critical for preserving trust between law enforcement and the communities they serve."