There's nothing to laugh at in yesterday's sobering news, but at least we can laugh at CNN's goofiest correspondent 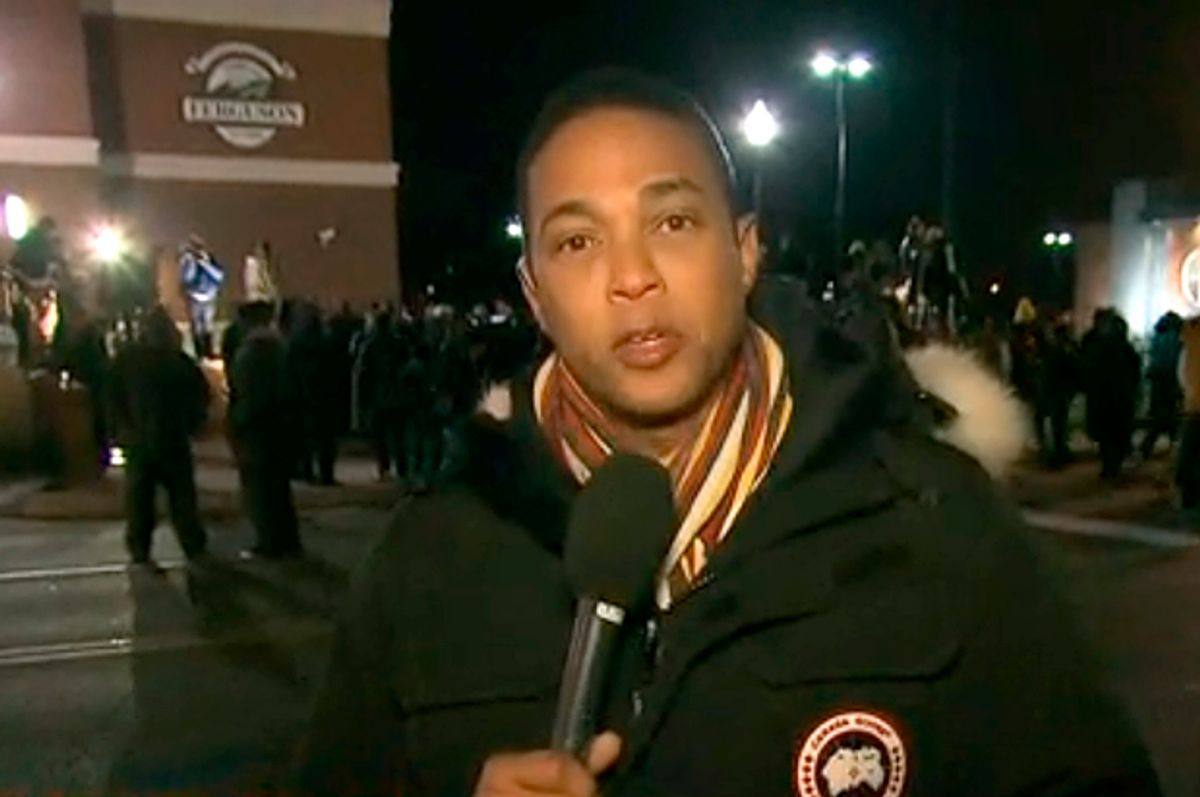 Footage of a journalist getting tear-gassed live on camera usually elicits sympathy, not jeers. But not when the journalist is CNN’s Don Lemon. His ham-fisted reporting from the Ferguson grand jury announcement and subsequent protests last night brought unintentional comic relief to an otherwise tragic and grief-filled event. If you didn’t already love to laugh at Don Lemon, you did after last night. From reporting in a giant puffy coat and gas mask ever-so-jauntily perched atop his head, to calling for post-gassing help as his colleagues soldiered on, Lemon’s on-camera antics continue to provide a handy release valve for CNN’s audience.

Lemon’s mock-worthy hit parade started as he described the scene on the streets immediately following the announcement that a Darren Wilson indictment would not be handed down: “We heard a gunshot and people started scattering. We’re watching people, they’re on top of the roofs of cars, the tops of cars. And obviously, there’s a smell of marijuana in the air as well.”

Oh, obviously. It’s that one word — obviously — that so handily encapsulates Don Lemon’s inappropriate magic. Supercilious when he should be grave, ridiculous when he should be dignified, self-important when he should be reflective, Don Lemon still hasn’t mastered the art of not making a live report all about him. After that point, Lemon could have been hit in the face by a beanbag round on camera, and people would have laughed, then memed.

Another small but mighty Don Lemon moment happened when a protester interrupted a live shot to yell “Fuck CNN!” Chris Cuomo gently moves the protester out of the shot. Van Jones doesn’t flinch. Lemon gives this dismissive little wave to indicate that he’s above such vulgarity, obviously, but you never know how these protesters are going to act, do you?

After he, Jones and Cuomo were hit with tear gas later in the evening, Lemon returned to the live feed via phone call to report that he had collapsed because of the gas. Later, he’s the only one on his team spotted in an over-the-shirt bulletproof vest.

Lemon actually performs a worthwhile service, albeit unwittingly, by creating a safe target for jokes and mild outrage that relieve some of the tension surrounding the grave situation. If a good Don Lemon crack doesn’t feel right, exactly, at least it doesn’t feel completely wrong.

Lemon picked up where he left off this morning, steamrolling over Van Jones like the knock-knock joke interrupting cow to decry his political correctness and insist that what Jones saw on the ground at Ferguson — often standing right next to Lemon — was not correct.

“Don, don’t do this to me now,” Van Jones countered, speaking for so many viewers at home.

Lemon pressed on by defending the police who shot the tear gas right at him last night. “How do you know who’s peaceful in a crowd of people who are racing toward you? How do police know whether it’s water or urine or a Molotov cocktail in a bottle?”

After his infamous “Meaning the using of the teeth?” gaffe during a recent interview with Bill Cosby rape accuser Joan Tarshis, we know that Don Lemon questions obviously don’t require serious answers.

Twitter continues to have a field day at Lemon's expense.

Don Lemon still a news journalist or did we get him outta there to work at J. crew?

If Don Lemon has done anything, he has united the country as our voices ridicule him as one. #ThankYouDonLemon