A glance at Ferguson: Then, now and the future 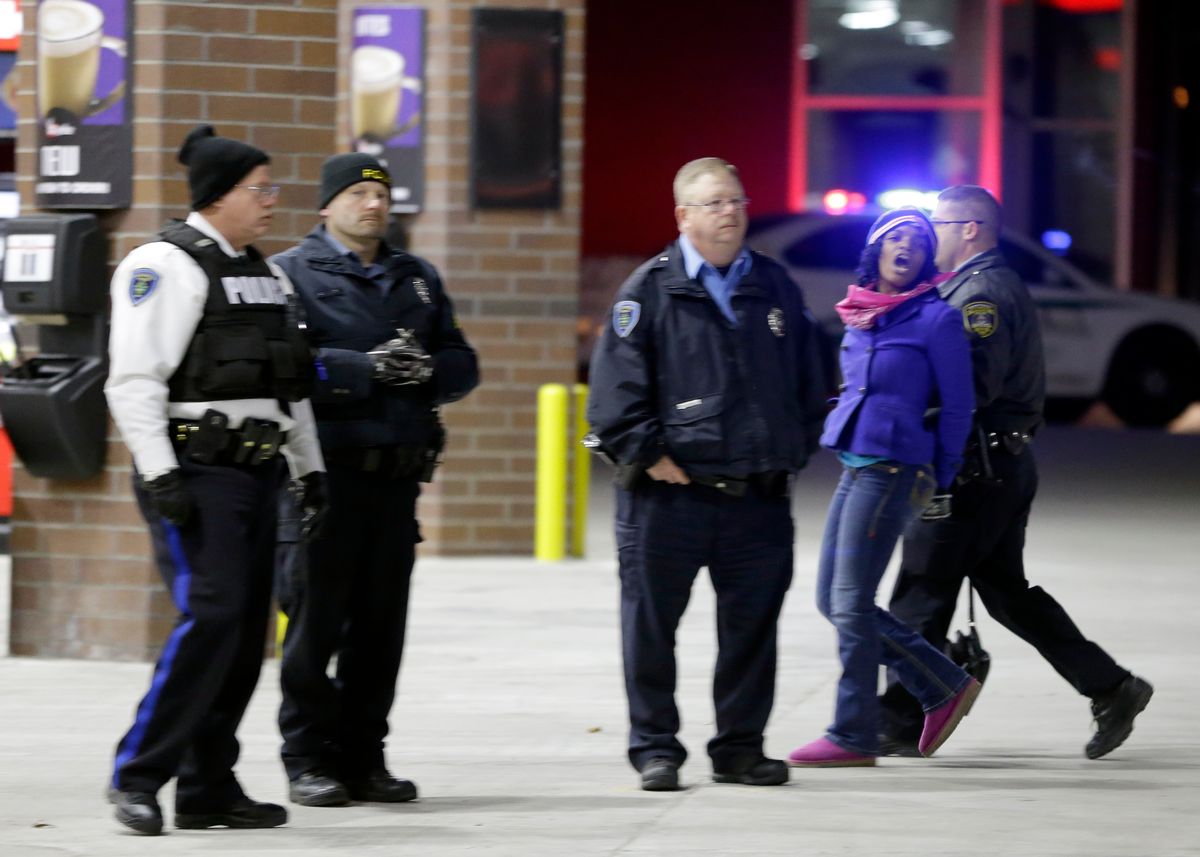 Police take a person into custody Tuesday, Nov. 25, 2014, in Brentwood, Mo. Missouri's governor ordered hundreds more state militia into Ferguson on Tuesday, after a night of protests and rioting over a grand jury's decision not to indict police officer Darren Wilson in the fatal shooting of Michael Brown, a case that has inflamed racial tensions in the U.S. (AP Photo/Jeff Roberson) (AP)
--

ST. LOUIS (AP) — The police officer who fatally shot 18-year-old Michael Brown spoke publicly for the first time about the confrontation, and for the second straight night crowds poured into the streets of Ferguson to protest a grand jury's decision not to indict him.

Protesters burned a police car, heaved rocks and bottles at officers and broke windows at City Hall Tuesday night in the St. Louis suburb where Brown was killed on Aug. 9. Although there were 44 arrests, officials said the scene was much calmer than the night before, when 12 commercial buildings were burned.

The presence of National Guard reinforcements was credited for helping to keep the peace. By early Wednesday, the streets were mostly clear, and Guard troops were stationed at various businesses around the city's downtown.

Earlier Tuesday, attorneys for Michael Brown's family and the Rev. Al Sharpton criticized St. Louis County Prosecutor Bob McCulloch's decision to take the case in front of a grand jury and not appoint a special prosecutor.

In an interview with ABC News' George Stephanopoulos, Ferguson Officer Darren Wilson said he feared for his own life when he shot Brown. He said there was nothing he could have done differently in the confrontation and disputed witness accounts that Brown at one point put his hands up in the air.

Wilson remains on administrative leave, which has been the case since the Aug. 9 shooting, Ferguson Mayor James Knowles said Tuesday afternoon.

THE BEGINNING: Wilson shot and killed Brown, who was unarmed, shortly after noon in the middle of the street after a scuffle. Brown's body lay there for hours as police investigated and an angry crowd of onlookers gathered. Several days of tense protests in the predominantly black community followed, prompting Missouri Gov. Jay Nixon to call in the National Guard. McCulloch decided to present the case to a grand jury.

THE ANNOUNCEMENT: Made up of nine white people and three black people, the grand jury met 25 days over three months, and heard more than 70 hours of testimony from 60 witnesses. McCulloch held a prime-time news conference Monday to reveal the decision.

THE DOCUMENTS: More than 1,000 pages of grand jury documents were released Monday, including Wilson's full testimony in which he described the scuffle in his patrol car and recognizing the cigars in Brown's hand as possibly being connected to a report of a convenience store robbery. Wilson also said that Brown approached him: "And when he gets about ... 8 to 10 feet away ... all I see is his head and that's what I shot."

THE FINAL SAY? The U.S. Justice Department has its own investigation into possible civil rights violations that could result in federal charges for Wilson, but investigators would need to satisfy a rigorous standard of proof. The department also has launched a broad probe into the Ferguson Police Department.