Black bodies are not weapons: Why white supremacists insist Michael Brown was "armed"

The right is enraged that anyone would say Mike Brown was "unarmed." Here's why they're so dangerously deluded 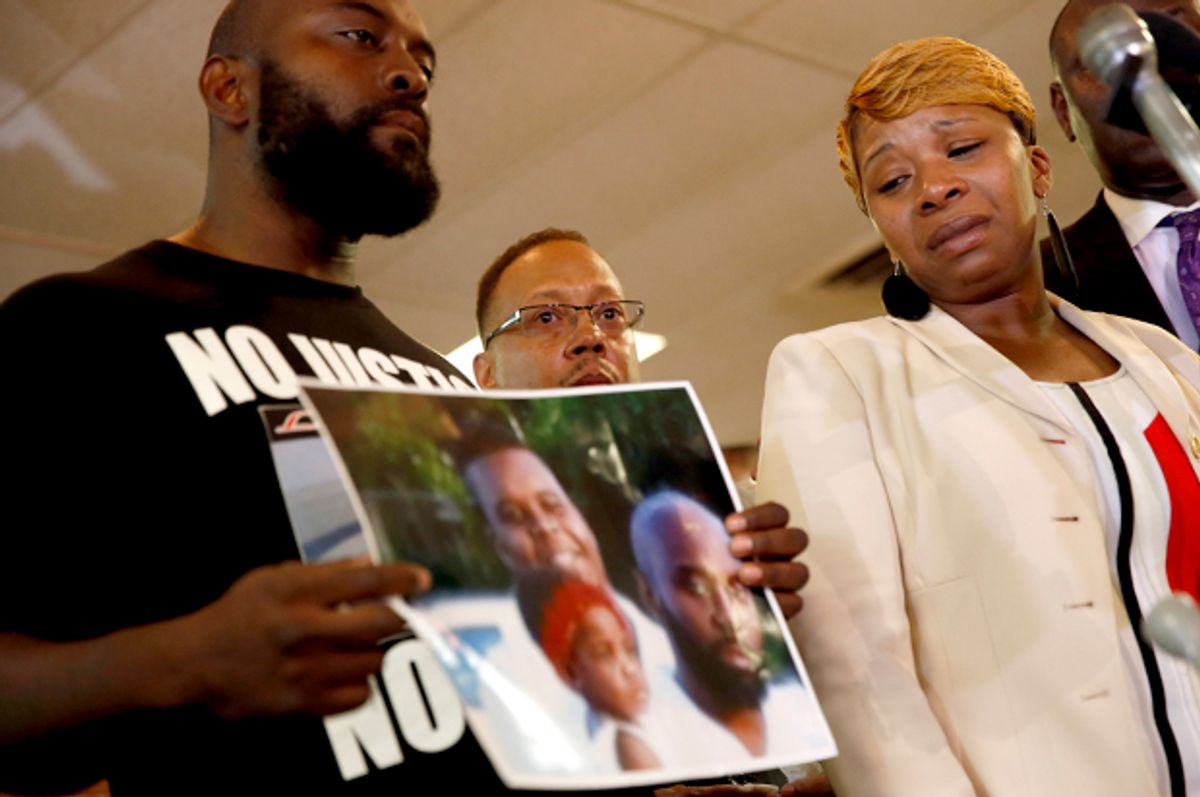 One of the more common right wing reactions to the Ferguson Grand Jury decision not to indict Officer Darren Wilson is an adamant rejection of the idea that Michael Brown was unarmed. This may seem puzzling to those of us who don't live in Conservative Bizarroworld since Michael Brown was quite literally unarmed, but it seems to be pervasive among people who support Darren Wilson. For instance this tweet, captured by Salon in this earlier article, illustrates the common reaction:

On my own timeline, I had this:

Darren Wilson's comic book testimony to the grand jury seemed to indicate that Brown had some sort of supernatural skill:

[W]hen I grabbed him, the only way I can describe it is I felt like a five-year-old holding onto Hulk Hogan.”

Wilson testified that Brown punched him twice through the patrol car’s door, and he was nervous that a third punch “could be fatal.” After his gun fired twice during the encounter, Brown ran away. Brown did not get on the ground, Wilson recounted, as per his order. Instead, he started to charge back toward Wilson:

“At this point it looked like he was almost bulking up to run through the shots. Like it was making him mad that I’m shooting at him. And the face he had was looking straight through me, like I wasn’t even there, I wasn’t even anything in his way.”

In his telling, Brown's body itself was a lethal weapon (I was afraid another punch "could be fatal") and impervious to pain. He was even able to "bulk up" as he was running straight into gunfire. He seemed to think Michael Brown had supernatural powers.

This tracks with some very ugly historical caricatures of young black males:

When a knock is heard at the door [a White woman] shudders with nameless horror. The black brute is lurking in the dark, a monstrous beast, crazed with lust. His ferocity is almost demoniacal. A mad bull or tiger could scarcely be more brutal. A whole community is frenzied with horror, with the blind and furious rage for vengeance.(pp. 108-109)

Back in 1901, a writer described a "black brute" as almost "demoniacal". Over a hundred years later, Officer Darren Wilson told the Grand Jury,"the only way I can describe it, it looks like a demon, that's how angry he looked."

It's doubtful that Officer Wilson ever read that moldy old racist literature. But it's fair to assume that he was more directly influenced by a more modern sociological theory called the "superpredator":

[I]nfluential criminologists in the 1990s issued predictions of a coming wave of "superpredators": "radically impulsive, brutally remorseless" "elementary school youngsters who pack guns instead of lunches" and "have absolutely no respect for human life." Much of this frightening imagery was racially coded.

In 1995, John DiIulio, a professor at Princeton who coined the term "superpredator," predicted that the number of juveniles in custody would increase three-fold in the coming years and that, by 2010, there would be "an estimated 270,000 more young predators on the streets than in 1990." Criminologist James Fox joined in the rhetoric, saying publicly, "Unless we act today, we're going to have a bloodbath when these kids grow up."

Panic ensued as states around the country rushed to pass laws to incarcerate young offenders for as long as possible in as brutal conditions as possible. These alleged monsters were indeed "demoniacal", not even human.   It was, needless to say, utter nonsense.  Violent juvenile crimes rates had begun to fall even then and  ended up at the end of the decade below the levels of the mid-80s. Today they are much lower still.

Now you can see a different application of this stereotype with the dubious medical concept of "excited delirium" a disease attributed to prisoners who die in police custody.  They are often described having super-human strength, imperviousness to pain and a single-minded, irrational intent to do violence to cops.  It's often associated with drugs and while it's not explicitly racial, the image it evokes easily reaches back to those 19th and 20th century racist stereotypes. (These stereotypes are echoed in the Eric Garner chokehold case as well --- overwhelming force applied to a large but unarmed black man.)

Leaving aside the specifics of the Michael Brown case which others will inevitably dissect in great detail, it's fair to note that this trained police officer, a man inside of a car with a gun and a radio with which to call for back-up (which he did) was so frightened by this young black male, whom he saw as having superhuman strength and the look of a demon, that the situation escalated to deadly violence in the span of 90 seconds.

We used to believe that citizens had an affirmative responsibility not to use deadly force when it was possible for them to escape the situation. Certainly, it was not acceptable for citizens to pursue and then shoot unarmed people on the street. The Castle Doctrine and Stand Your Ground movements have changed all that.  Today, in many jurisdictions, if a citizen feels afraid, regardless of his ability to escape his situation, he is allowed to use deadly force. It's a defense that doesn't always work out for them, as we saw down in Florida with the Michael Dunn case, but more and more our society is accepting the idea that if you feel afraid you can shoot first and ask questions later.

Meanwhile, we have the police behaving as if they are patrolling the streets of Mosul instead of the town in which they live and raise their families. As former San Jose police chief Joseph McNamara put it, they now place the "emphasis on 'officer safety' [where] paramilitary training pervades today's policing, in contrast to the older culture, which held that cops didn't shoot until they were about to be shot or stabbed".

The question then, is who are these people so afraid of that they need to fire blindly rather than run away? Who do the police think are the enemy they must shoot down in the street? It would appear to be the same old frightening stereotype it's always been: the "black brute." (A "thug" in modern parlance.) His super-human strength is so overwhelming that he could kill you with one blow. You fear for your life even when he is running away, even when he is wounded, even when he is unarmed. He is not human. He is "demoniacal."

By the way, Officer Darren Wilson, the armed white police officer who compared himself to a five year old in comparison to the unarmed monster Michael Brown is 6'4" tall and weighs 210 lbs.