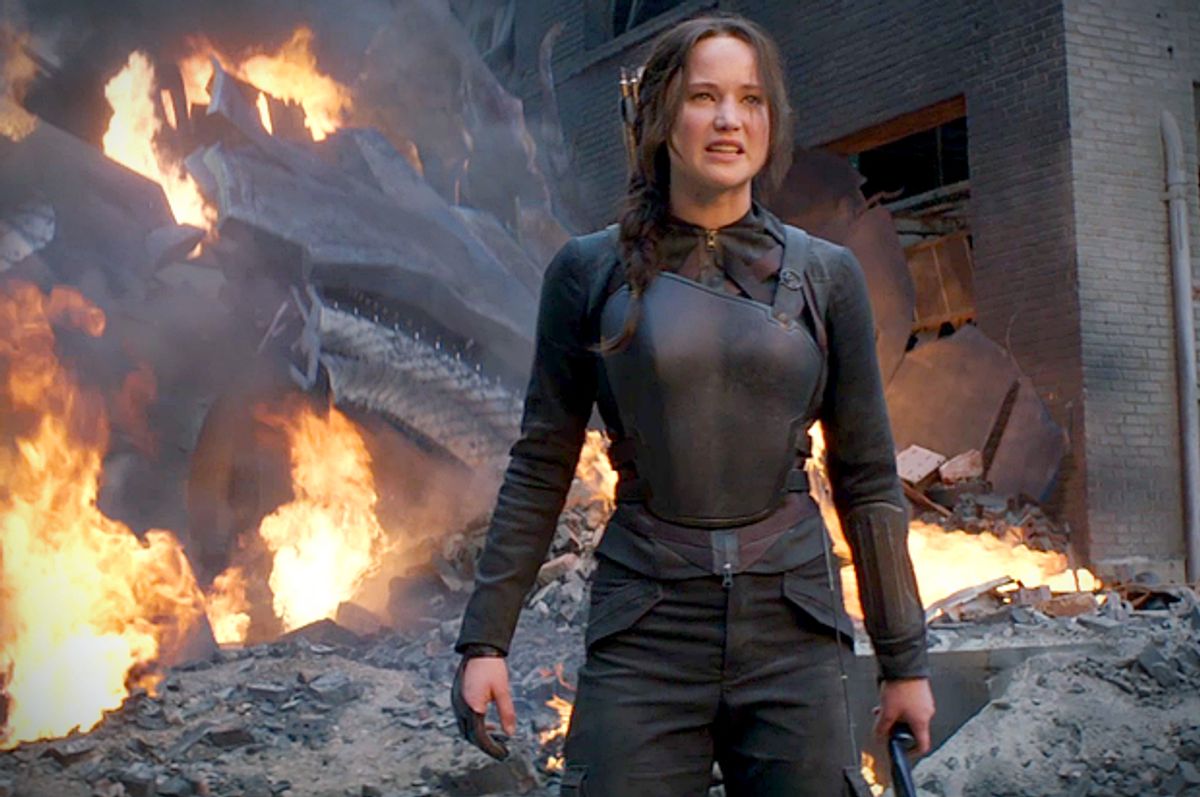 In the midst of events of Ferguson, Missouri this week, it’s been difficult to maintain focus on “pop culture,” whatever that is. At times like this, art can seem like a meaningless response, an empty refuge against the slowly dawning knowledge that much of the progress this country has fought for is being rendered meaningless—most clearly and specifically when it comes to race relations. The scene on national news Monday night could have been a replay of the 1992 riots in response to the Rodney King assailants’ acquittal—and in that case, there was a trial. In the 22 years since the Rodney King trial; in the 59 years since the Emmett Till trial; in the 17 months since the Trayvon Martin trial—one would hope that some progress had been made.

And yet here we are, looking at a situation where the murder of a young man by a police officer is not considered worthy of a mere indictment, let alone a guilty charge, and it feels like the past is replaying right before our eyes. It’s a sickening rewind made all the more real by watching our first black President rendered impotent by an electorate eager to polarize his remarks on race and a congress hell-bent on dialing back his most progressive legislation—sharing a split-screen on CNN and MSNBC with dark, shaky, wide-angle shots of increasingly violent protests in Ferguson, as a whole population’s desperate attempts to be heard take the form of anger.

There’s much to be said about the specific machinations of the Robert McCulloch, prosecuting attorney for the St. Louis County, who the New York Times editorial board took to task in Tuesday’s newspaper, and the St. Louis Post-Dispatch observes has been a questionable figure for years. There are searing voices cutting through the easy disdain for the protestors, arguing that when a system has completely failed its citizens, the tools of the system’s supremacy are open season.

And then there is “Mockingjay: Part 1,” which hit theatres this past Thursday. On Monday afternoon, in the hours before McCulloch released the grand jury’s verdict, graffiti quoting the film (and the books they’re based on) appeared on an arch in neighboring Shaw: “If we burn, you burn with us.” An “FTP” scrawled underneath indicates the more universal slogan for any protestors demonstrating against state discrimination: “Fuck the police.”

“The Hunger Games” franchise is one of the most provocative and influential franchises of our era; though it is, at times, a story about a teenage girl falling in love with a teenage boy, it is far more often a complex analysis of suffering, media, and state power, told with such elegant simplicity that a child can understand it. And in part that’s because the victims of “The Hunger Games” are children. Quite openly, for the gladiatorial battle-theater of the titular Hunger Games, where 24 children between the ages of 11 and 17 are sent to an arena to kill each other for entertainment. And more broadly, in the oppression of the far-flung districts, where as always, children bear the burden of poverty.

The comments underneath the Guardian article with that photo are openly derisive. Most of the comments—presumably speaking from very comfortable environments—sneer at the protestors for resorting to property destruction. One asks why the protestors would choose the words of a “young adults’ movie” instead of the words of Martin Luther King, Jr. and Nelson Mandela. And a particularly impassioned commenter named Anastasia writes:

I said to someone last week that they think they're in Hunger Games. And poof, this appears. Seriously people?! The rest of the United States think you causing nothing but trouble. This isn't the Hunger Games! The law and those who enforce it, along with those who create it, are not the Capital or President Snow. You are just destroying your own town.

It is satisfying to believe that “The Hunger Games” tells the story of a dystopia—a fractured fantasy world, either far in the past or far in the future. It’s not. Turn on the television: We are witnessing an hour of struggle between those without power and those who are eager to hold onto their own. The struggle is played to win. Robert McCulloch is playing the game. President Obama is playing the game. Every news network is playing this game. Officer Darren Wilson’s sitdown interview with George Stephanopoulous is eerily reminiscent of Peeta’s interviews with Caesar Flickerman in “Mockingjay”; McCulloch’s indictment of social media in warping the “true” story of what happened that day is President Snow decrying the lies of the District 13. Ferguson, a forgotten suburb in a flyover state, is this story’s District 12; an impoverished area reduced to rubble, while the population is told that it is their own fault for the destruction.

The frills might be different, but the basic underlying hypocrisy of “The Hunger Games”’ Panem and the present-day United States is the same: Some children matter more than others. Mike Brown was eight days out of high school when he was gunned down. Trayvon Martin, 17. Cameron Tillman, 14.  Tamir Rice, shot the same weekend “Mockingjay” premiered, a mere 12 years old.

And these are all children killed by the state. At what point do the fine distinctions between “Hunger Games peacekeeper” and “American police officer” break down? At what point does the knowledge that black teen boys, aged 15-19, are 21 times more likely to be killed by law enforcement not sound like dystopia? How profound must this feeling of disenfranchisement be, that these young people in Ferguson would even for a moment consider equating Panem and America? So profound, apparently, that for them there is no significant difference. The odds, as the rebels scrawl with their graffiti in “Catching Fire,” are never in their favor.

One of the quiet ironies of what the “Hunger Games” franchise has become is that as the story has reached worldwide prominence, it has become a part of the system that it so ruthlessly critiques. The author of the series, Suzanne Collins, would likely have anticipated this; Sady Doyle, in her excellent review of the film at In These Times, comes to a similar conclusion. “The part of the franchise that induces a sense of queasiness (and, I think, the brilliant part of it) has always been that, on some level, 'The Hunger Games' is what it critiques: It asks us to abhor the idea that people would watch children fight to the death, but it does so by showing us riveting scenes of children fighting to the death. Now, 'Mockingjay—Part I' asks us to be skeptical of ‘revolutionary’ media and celebrity, but it does so by giving us a ‘revolutionary’ blockbuster fronted by Jennifer Lawrence.”

But she concludes, and so do I, that the film is remarkable in the way it implicates the audience. Unlike the first two films in the series, which seemed to be telling more of an action film that sort of was also about killing kids, “Mockingjay, Part 1” does not turn away from the darkness of the series. The first two films offered the Capitol as a glitzy if evil break from the relentless monotony of despair in the districts. In this latest film, Katniss and her friends never make it to the Capitol, except as fugitives or prisoners. The propaganda spots she films for the rebel cause have the same music, font choices, and visual FX as the trailers and teasers for “The Hunger Games” franchise. There is no difference, director Francis Lawrence insinuates to the audience.

And in the wake of Ferguson, some of the most terrifying sequences of “Mockingjay” are the protests by the rebels against the all-powerful Capitol. Every mission is a suicide mission: In District 8, lumberjacks blow up an entire stand of trees, with them in it, rather than let the peacekeepers drive them to another day of hard labor. In District 5 scores of unarmed resistance fighters run into live fire to disrupt the operations of a dam that supplies the Capitol with electricity. In the latter, the demonstrators walk and then run to the dam at night, faced by uniformed peacekeepers training large firearms at the crowd. I saw the film on a Friday. Three days later, I watched as protestors started walking, then running, while McCulloch was still talking, at this—an orderly array of riot police. Disorder and misrule, yes, but also a group of people desperate to do something, not nothing.

My friend Genevieve Valentine said this to me, when I sent her the above link to the picture of the “Mockingjay” graffiti: "Imagine all the people who think of ‘Mockingjay’ as a justified—a necessary—revolution, and think of Ferguson as a bunch of thugs making trouble. On a night when the police were gassing the people they're meant to protect, with the National Guard talking openly about carrying live rounds to use on peaceful protestors while they do nothing to protect local businesses from harm by fringe groups, someone spray painted that slogan. Imagine all the people who saw that and had to stop — even for a moment — and wonder if they are, in fact, part of the problem; if they're the Capitol after all."

“Mockingjay” is a movie, Panem is fictional, and I am not trying to make facile comparisons. But Collins’ world—as interpreted through the multiple directors, producers, and actors who have made these films—is, like every work of fiction, a dark mirror of our own. A few young people in Ferguson can see the connection between this billion-dollar franchise and their own lives. Do we?