The right's vile Ferguson ploy: Why they really want to focus on "riots"

Supporters of Darren Wilson and apologists for Ferguson officials are desperate to change the subject. Here's why 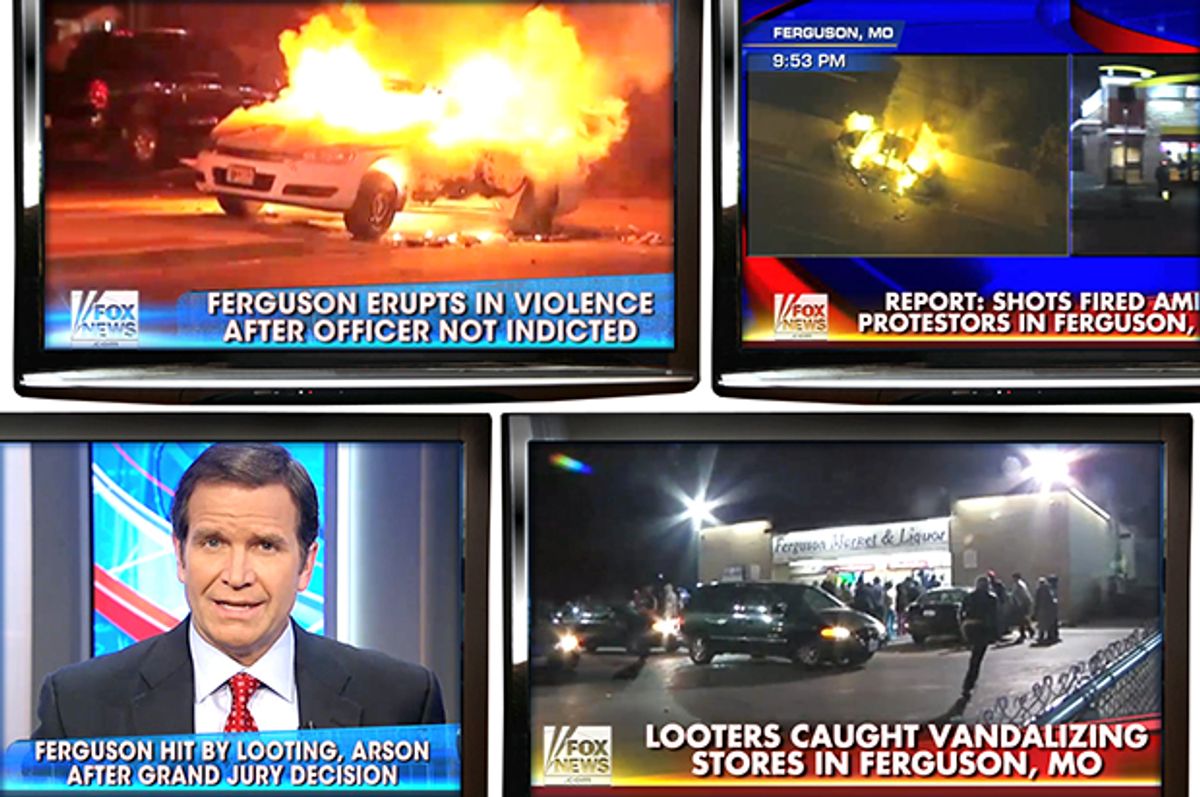 From the very beginning, before St. Louis County prosecuting attorney Robert McCulloch had uttered the first word of his defensive and dissembling speech, the fix was in. The conspiracy this time was not to protect Officer Darren Wilson from standing trial for the killing of Michael Brown, though that was certainly related. This time, the conspiracy was to organize the announcement of Wilson’s exoneration in as provocative a way as possible. The ultimate goal was to manipulate the public and the press into forgetting the real story of Ferguson — of police brutality and racial injustice — and bickering about the morality of rioting instead.

At the very least, that’s the impression I’ve had throughout the Ferguson controversy, especially as the wait for news from the grand jury dragged on, and as the county’s offices began leaking pro-Wilson factoids like a sieve. And after witnessing last night’s spectacle, which was preceded by multiple delays and conspicuous readying of the state’s police forces, I’m no less convinced that the powers that be in Missouri approached the Wilson verdict with little concern for accountability or justice. All they wanted was to improve the Ferguson power structure’s battered images — not by doing good, but by making the protesters look even worse. It’s a tried and tested strategy; as Rick Perlstein has documented, it helped make Richard Nixon president.

A quick look at the nation’s front pages on Tuesday indicates that the plan worked on some, but fewer perhaps than these would-be Pat Buchanans wanted. By maneuvering to incite disorder and polarize public opinion along race lines, these would-be Nixons probably thought they could “cut the … country in half,” as Buchanan recommended, and walk away with “far the larger half.” But while some of the biggest names out there fell for the trick, focusing on the small number of rioters instead of Wilson’s verdict, most editors understood that the controversy in Ferguson remains what it’s always been: A jarring and dispiriting reminder that the Declaration of Independence’s assertion of universal human equality (the “promissory note,” as Martin Luther King Jr. once called it) remains, for millions of Americans, a debt unpaid.

There’s a lesson here, one that those outraged by what’s happened this year in Ferguson — and happens countless times throughout America, each and every day — should keep in mind as they contribute to our amorphous yet powerful national conversation. Put simply, we must not allow supporters of the Wilson verdict to distract us by making this a conversation about rioting or poverty or race. That’s not to say we should condone the riots; and it’s certainly not to say we should avoid subjects that involve issues of race and poverty. What it means instead is keeping in mind that riots are nothing new, that the unique struggles of the African-American community can’t be simply attributed to poverty, and that discussions of “race” that aren’t linked with specific policy changes often result in little more than frivolous declarations of privilege.

If we can combat the dual influences of a Ferguson elite that wants national attention to drift elsewhere; and a national media that dislikes policy and favors more watchable, clickable, shareable and fundamentally empty manifestations of the culture war — if we can do that, there’s hope that even though the killing of Michael Brown by Darren Wilson will always be an obscenity, it won’t have been entirely in vain. So let’s ignore those in American society who would rather debate the merits of trashing a bodega than the killing of a child, and let’s not listen to those who would use this opportunity to relitigate the civil rights movement, the Rodney King riots or the Trayvon Martin case. Let’s honor the wishes of Michael Brown’s parents and decline to “just make noise” in favor of making “a difference.”

How to define that difference — whether through body cameras on police, constraining the power of prosecutors, mandating that police departments reflect the communities they serve, etc. — is the debate we need to have right now. The culture war can wait.