'Tis the season -- for awkward sex at your parents' house

Whenever my husband and I head home for the holidays, our sex life becomes as giggly and repressed as teenagers' 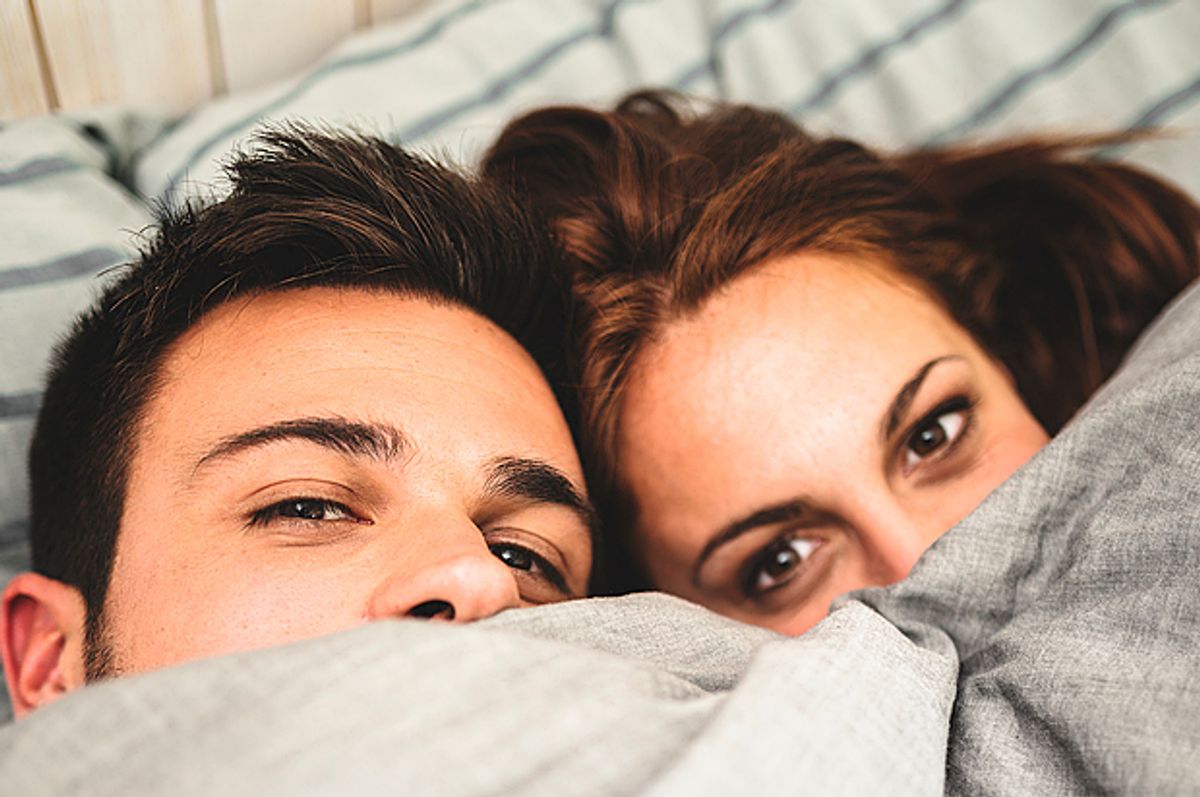 The last time my husband and I prepared to visit his parents’ house, it was like we were entering the priesthood. We boned as though we might never see each other again and, afterward, he morosely told me, “Guess that’s the last time we’ll do that for a while.” Despite the post-orgasmic haze, we both took on a distinctively Eeyore-ish slump. "Maybe we can try the floor when we're there!" I offered with disingenuous cheer. We both knew there would be no sex for the next five days, no ifs, ands or buts -- or butts.

If you knew his childhood bedroom, you would understand. His parents sleep but a few steps away, the door has a gap at the bottom that, at least in my mind, looms unusually large, the wood floors creak, and the bed -- oh, that ancient bed. Sitting on it, even in slow-motion, creates the sound of the Tin Man being crushed to death in an industrial trash compacter. Sneeze while lying in it and it sounds like you’re playing a rusty accordion. “Just imagine what it was like trying to masturbate as a teenager,” my husband told me the first night we slept on it -- and then we both imitated a jerk-off so fast and furious that it almost defied sound.

We're lucky enough not to be traveling this Thanksgiving, but this is what the holidays remind me of: Adults reentering their childhood homes as neutered versions of themselves. Of course, we don't just do this when we go home for the holidays. Sleep over at a friend's house and you're likely to play it chaste, too. But there is something psychologically potent about the way we perform purity around our parents, those people who we know by our very existence have had sex at least once (or perhaps you only know for sure that they got busy with a turkey baster -- ugh, sorry, to ruin Thanksgiving -- or you were adopted and thus spared the certainty of parental sex).

Visiting home, especially with a significant other, is one of the quickest routes back to the disempowered feeling of teenage-hood: Suddenly you're having to whisper, tiptoe around and concoct devious plans to fool around without raising parental suspicions. It doesn't matter if you've gotten married, purchased a house or even had a kid. None of those markers of adulthood matter once you're back in your kid bedroom, squeezed onto a too-small bed with your beau, staring at a ceiling that still bears bits of tape from all of your Tiger Beat pinups, and wondering what to do about his persistent boner. I mean, hypothetically.

It's not just the proximity of the parents that makes the sex-during-the-holidays thing uncomfortable, it's the nearness to little you. Last Christmas, my husband and I were in my old bedroom and I nodded across the room. "Do you have any idea how many times teenage me practiced dancing like a stripper in front of that mirror? I bet the little short-shorts and tube tops that I fashioned for myself are still in my closet." I forget how he responded. It might have been something along the lines of, "I'll be so scared if we have a daughter." I didn't mention how this was the same room in which I'd fooled around with my grade school best friend, masturbated to printouts of Internet porn or had my first orgasm. We were at the site of my sexual coming of age, this archaeological dig of the sexual self. And, somehow, having sex there as an adult felt absolutely impossible.

This skittishness is real even for those of us who had very permissive upbringings. My parents allowed my high school boyfriend, who was having family troubles and sleeping in his car, to move in with us during my senior year of high school. Initially, they attempted to give him his own room and asked that we sleep separately -- but after several nights of sneaking into each other's rooms, we dispensed with the false pretenses and I can't remember my parents objecting. We had sex all the damn time, right across the hall from my parents' room. I'm sure they knew; I'm sure they heard. At the time, I was an arrogant and entitled teenager who had resentfully spent enough nights plugging my ears to the muffled moans coming out of my parents' room to feel it was my right -- and I pretty much still believe that it was.

It's all so different now. That youthful arrogance is gone. These days, I meet my parents -- or parent, since my mom died -- as an adult, not as a hormonal teenager bent on getting what she wants no matter the consequences. I worry more about decorum than getting down -- and that's especially true when visiting my husband's parents' house. And you know what? We were right, we didn't have sex once on that trip. Instead, we stole kisses and inappropriate crotch-grabs at opportune moments, and many more times I swatted his hand away when I thought his parents might catch us. It's good to be reminded of what it's like to be a sneaky, repressed teenager -- even if you never experienced it the first time around.