Why meals are movie magic: The best food scenes in film history

From the sliced garlic in "Goodfellas" to the perfect pink steak in "The Matrix," these scenes are irresistible 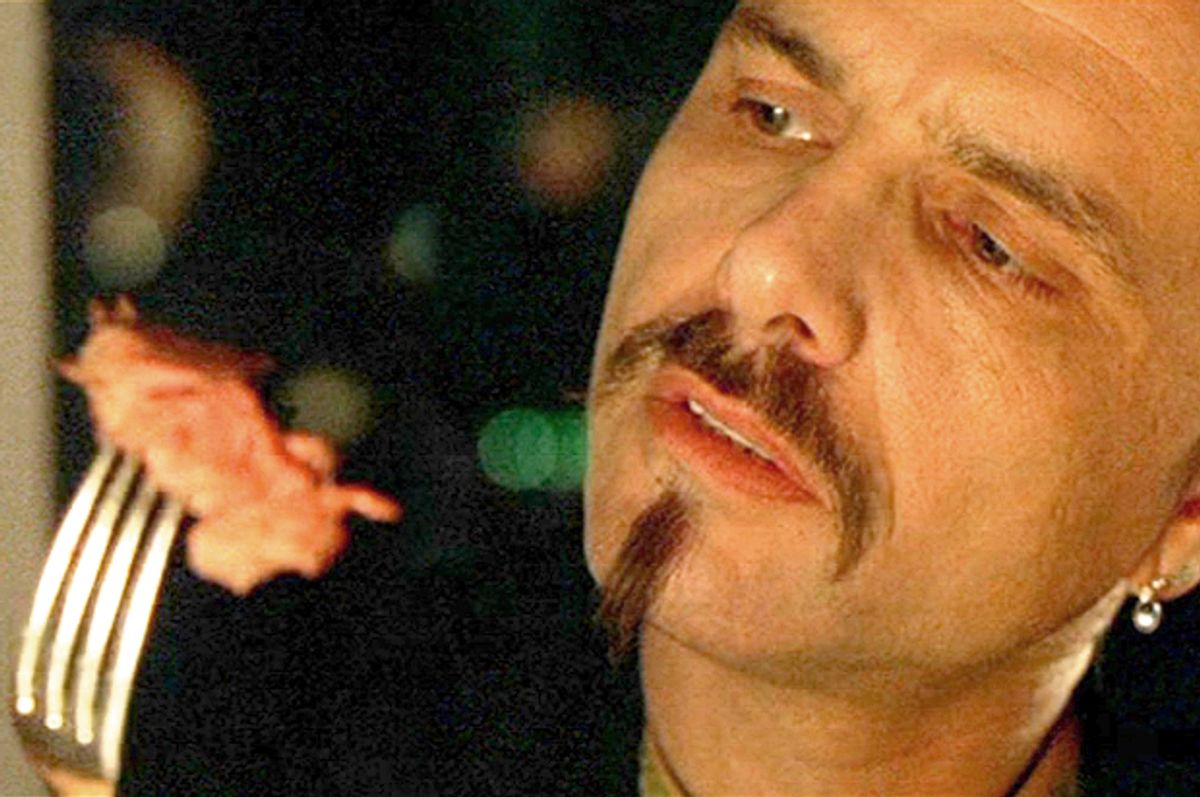 Everyone loves a good food scene. Some of the best literary passages of all time are about food, from Proust's madeleine to the clam soup described in "Moby Dick." But in the end it’s still Kurt Vonnegut’s mind relaying to us how good that vitamin tonic in "Slaughterhouse-Five" makes our guy feel. Movies, though, are a different story. In "Cool Hand Luke," it’s a living, breathing Paul Newman stuffing that fiftieth egg into his mouth before our eyes. So in honor of Thanksgiving, here are the top food scenes in movie history:

"Goodfellas": In this scene, our goodfellas are stuck in prison and they’re making an elaborate dinner. Specifically, it’s when the boss, Paulie, is slicing the garlic thin enough so that it will melt in a pan of hot olive oil. It’s the close-in shot, I think, that gets me, those stocky fingers handling that delicate little razor blade, carefully pressing down and away on that clove of garlic. I think it has something to do with the contrast between the toughness of those big money-laundering men and the importance, as Paulie keeps saying, of not putting too many onions in the sauce.

"The ’Burbs": The scene in which Tom Hanks and his goofball vigilante buddies finally are invited into the mystery neighbors’ house, and they’re served sardines on pretzels. Crazy! There’s extra attention paid to the crunch and squish when Tom Hanks bravely bites down.

"The Matrix": The traitor guy in the first "Matrix" movie, when he meets the bad man in the suit who’s hell-bent on messing up Keanu Reeves’ day, is plied with a thick bloody steak and a glass of red wine. We know that the steak was probably actually stone-cold and treated with food coloring. The wine was probably grape juice, or grape soda, or grape drink. But it looks so good.

"Pulp Fiction:" We would be remiss without mentioning the famous five-dollar milkshake scene in "Pulp Fiction."

"Wet Hot American Summer": Though he doesn’t do a lot of actual chewing and eating, Paul Rudd steals the show with his cafeteria scene in "Wet Hot American Summer." The way he’s so resentful about Janeane Garofalo making him pick up the plate and the cup and then the individual parts of his sandwich. It's so perfectly over the top.

"Shawshank Redemption": The beer after the prisoners tar the roof. It’s warm beer, but that somehow makes it even better.

Seth Sawyers' writing has appeared in The Rumpus, The Millions, Sports Illustrated, The Morning News, River Teeth, Fourth Genre, Quarterly West, and elsewhere. He is working on a novel about a 10-foot-tall office worker who finds out there is another person like him, and that it's a girl. He is an editor at Baltimore Review. He is on Twitter at @sethsawyers and online at https://sethsawyers.wordpress.com.