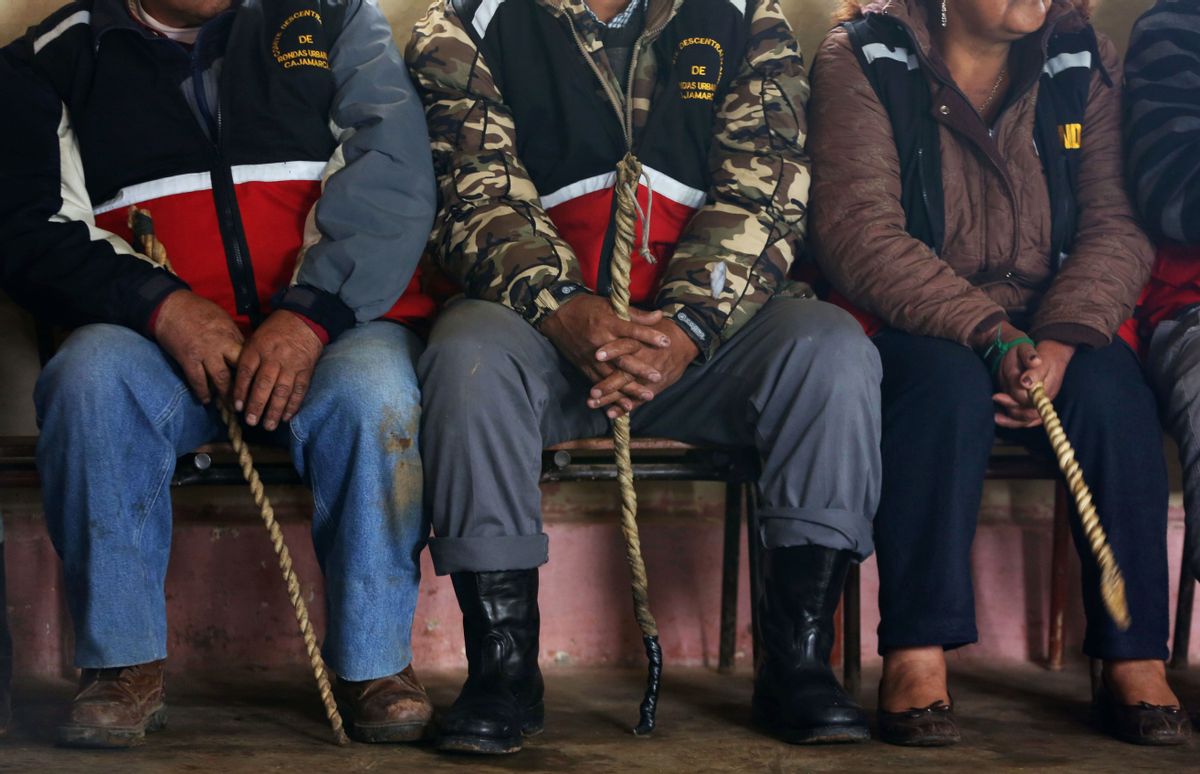 In this May 9, 2014 photo, men and women, all wearing citizen patrol vests and wielding whips, take part in a hearing of an accused community member, in the Cajamarca municipality, Santa Rosa de Chumbil, Peru. For all but the most serious crimes, this is how justice is routinely administered in this highlands provincial capital of 200,000 people: self-appointed bands of vigilantes known as "rondos urbanas," or urban patrols, take on the roles of police, prosecutors and judges. (AP Photo/Martin Mejia) (AP)
--

CAJAMARCA, Peru (AP) — The standard "peacemaker" in this highland Peruvian provincial capital is a whip fashioned from the twisted sinew of a bull penis. It gets a lot of respect. So do the well-organized bands of citizen vigilantes who wield it.

Their rise over the last decade is just one example of how Latin Americans are responding to corrupt, indifferent police forces and the erosion of state-run criminal justice.

For all but the most serious crimes, justice in Cajamarca, a city of 200,000, is routinely administered by these grass-roots citizen patrol units known as "rondas urbanas."

Their punishments tend to be swift, harsh and painful.

"If the police did their jobs there would be no need for us," says Fernando Chuquilin, the most popular leader of the city's 30-odd "rondas."

In an opinion poll last year, Peruvians ranked the National Police only slightly behind Congress among the country's most corrupt institutions. The judiciary came in third.

It was the rondas — and not police — who recently broke up an auto thefts parts ring, turning over evidence to the chief local prosecutor, Chuquilin boasts.

Yet their periodic whip-cracking raids on brothels have elicited outrage from human rights activists and gasps from Lima TV reporters, who tend to portray them as Andean-style Taliban morality police.

In brothel raids, ski-masked vigilantes have left welts on women they've whipped — and set fire to mattresses and other furniture carried into the street.

Prostitution is legal in Peru, but Chuquilin says he only targets bordellos with underage sex workers or that have become magnets for criminals who rob people nearby.

A big man with an easy smile and an incessantly ringing cellphone, Chuquilin lays on the last of a dozen lashes at the group's storefront one morning after patrol members deliver a short, pot-bellied man they say is a serial pickpocket.

After a few stings of the whip, the man shrieks, jumps to his feet and begs for mercy. He confesses, pays $60 to a woman who says he stole her cellphone, and is let go.

"That's how we deal with this kind of thief," says Chuquilin.

Every day, people visit his no-frills storefront and fill out summonses. No case is too small, no dispute too trivial. People don't dare ignore the summonses, and the hearings are often standing-room-only.

He also arbitrates cases that authorities consider minor, settling property and debt disputes, family quarrels and marital infidelities. (Adulterous spouses typically get a few lashes and are ordered to be faithful).

If a felony is committed, the rondas turn the transgressor over to police. The harshest sentence they administer, they say, is banishment.

"If this is allowed to spread, there's going to be chaos," she said, even though she often must coordinate with Chuquilin.

"People turn to the rondas because they are more accessible," said Cajamarca state's chief judge, Fernando Bazan. "People rely on them daily — and daily tell us to our face that we are incapable of guaranteeing security."

Cajamarca's 800-member rondas are an outgrowth of rural peasant patrols, or "rondas campesinas," that first formed in the 1970s as small farmers united to fend off cattle rustlers. They won legal status in 1993.

Their moral authority derives from the close-knit nature of their communities and their power to publicly shame people engaged in anti-social behavior, says John Gitlitz, a sociologist at State University of New York at Purchase.

In Cajamarca, the rural ronda morphed into an urban variety, now so strong it helps police in crowd control at big soccer matches.

The rondas, Chuquilin says, are the best tool available for preventing troublemakers from becoming career criminals.

He cited a recent case of two young men who were robbing motorists at gunpoint. They had even shot a man in the leg.

Ronderos don't use firearms, so Chuquilin and his crew surrounded the house where the youths had holed up and persuaded them to surrender.

Then, to save them from a 300-strong mob, he agreed to let them be force-fed raw chili peppers as punishment.

When it was done, the two paid the medical bills of the man they wounded, were accepted back into the community and given work.

"One didn't have a home — he had been a wanderer — so the community helped him out and built one," said Chuquilin.

"In other words, they turned them into good people."