Is Louisiana's coastline beyond saving?

An area the size of Delaware has already disappeared, and we may be powerless to stem the rising tides 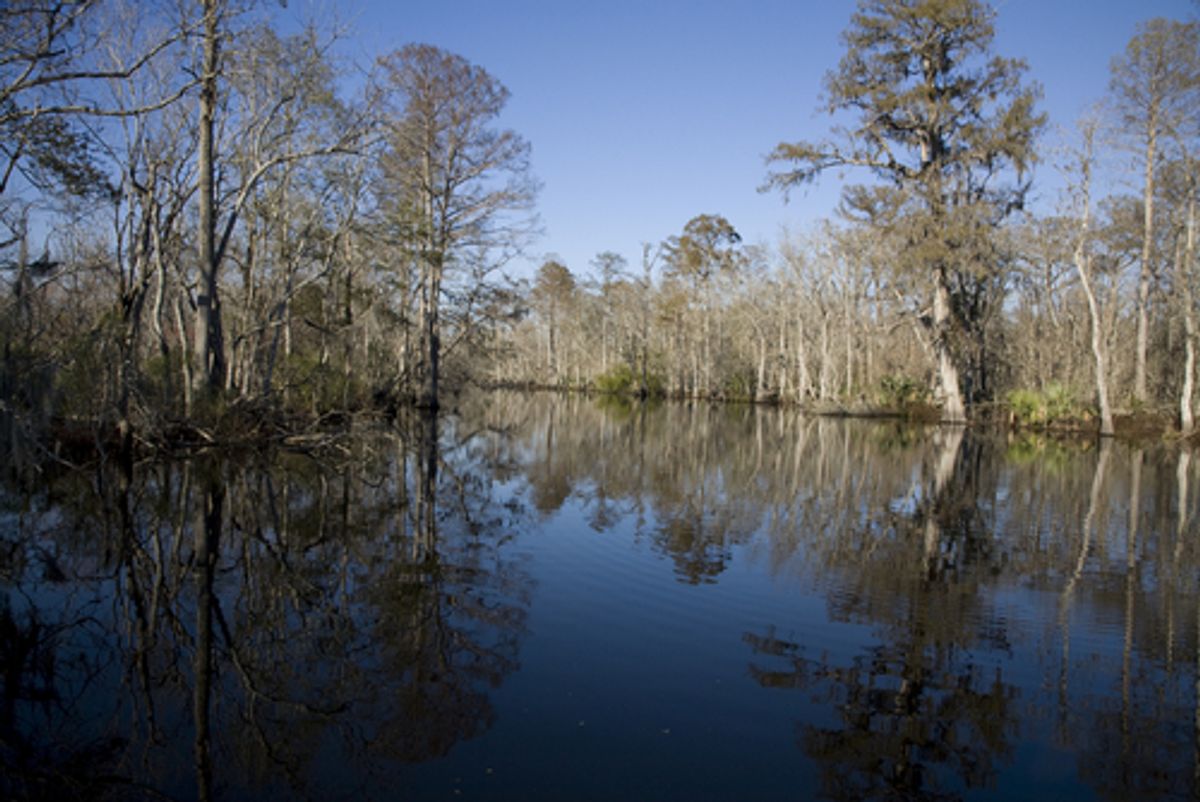 NEW ORLEANS, Louisiana — The river systems of the world have a certain pageantry in the history of the countries through which they flow, and names with a musical ring: Amazon and Ganges, Mekong, Nile and Irrawaddy, Rhine, Volga, Yangtze and the name with a hard, dark pull in New Orleans environmental writer Bob Marshall’s life: Mississippi.

“All of the world’s great deltas are collapsing because of development and sea level rise,” says Marshall, who has long history in the Louisiana coastal wetlands, where the Mississippi River delta meets the Gulf of Mexico.

Rivers were the highways of the world before roads and internal combustion engines,” explains Marshall. “Commerce was at the mouth of these rivers, port to port. The alluvial flood plains were fertile for farming, so they put up levees. The Niger River delta [in Nigeria] has been absolutely destroyed by oil and gas drilling, much worse than ours.”

Marshall reports for The Lens, a digital publication that collaborated with ProPublica on "Losing Ground," an August investigation of Louisiana’s coastal erosion. The project used map simulations that drew wide media attention for a rendering of how much coastal forest has been swallowed and how far inland the Gulf is rising as south Louisiana sinks.

“Louisiana is drowning, quickly,” Marshall wrote in the main story. “In just 80 years, some 2000 square miles of its coastal landscape have turned to open water, wiping places off maps, bringing the Gulf of Mexico to the back door of New Orleans and posing a lethal threat to an energy and shipping corridor vital to the nation’s economy.”

An area the size of Delaware has disappeared. Acreage the size of a football field sinks in the Gulf on average once an hour. The federal government recently erased more than 20 communities south of New Orleans from the map – they’re underwater now.

As a journalist for the Times-Picayune, Marshall shared in two Pulitzer Prizes with colleagues for coverage on the fate of the world’s oceans and Hurricane Katrina.

He left daily reporting after 41 years in 2012 when Advance Publications, the Newhouse family conglomerate that owns the Times-Picayune, slashed jobs in downsizing to a three-day-a-week newspaper plus the online operation.

The Lens relies on foundation and donor support with seven full-time editorial staffers and three part-time, doing in-depth reporting with a special focus on land use and politics. Marshall said he earns substantially less than his salary at the daily, but that he left with a good pension.

Marshall graduated from Loyola University New Orleans in 1971 and hired on with the States-Item afternoon daily where he covered Saints football and developed a popular outdoors beat on hunting and fishing. In 1980 the morning Times-Picayune subsumed the Item. Marshall kept covering the NFL and expanded his conservation coverage, which got him knee-deep into environmental reporting.

The Lens brought him back to Loyola, where the communications department provides it newsroom space.

“I spent all this time out in the wetlands,” he says with a trace of sorrow. “It was my playground, my office and my church. That’s my religion, where I feel inspired spiritually — nature speaks to me.”

The Gulf lies 97 miles south of the city. Marshall cites rates of sea level rise and land subsidence by the National Oceanic and Atmospheric Administration in predicting that the Gulf will be at the city’s back door in 90 years, with major potential flooding before then.

The Army Corps of Engineers has completed a $14.5 million upgrade to the levee system since the 2005 flooding brought on by Hurricane Katrina.

“The state knows it cannot completely stop land loss,” says Marshall, “but believes that by redirecting the river and its sediment into some of the sinking basins south of New Orleans, it can regain enough wetlands to maintain a functioning estuary and some storm protection by 2060.”

The levee system that protects the low-lying city and outlying towns has for decades been bottling up sediment that strengthens wetland growth, driving it like a chute into the Gulf. But even should a rerouting of the levees succeed, the impact of 10,000 miles of navigational canals carved by oil companies through the wetlands have had a huge impact on the land loss, as Marshall has long reported.

Not to mention 50,000 industrial wells in the marsh, pushing subsidence.

Gov. Bobby Jindal’s administration produced a master plan to halt coastal erosion; however it has no reliable funding stream for the enormous cost, estimated in the $100 billion range. Jindal and the legislature want the federal government to bear the brunt.

Nathaniel Rich, in a Oct. 4 New York Times Magazine piece “Waterworld,” explores these issues in a profile of John Barry, author of “Rising Tide,” an acclaimed history of the 1927 Mississippi River flood.

As a local levee board official, Barry spearheaded a lawsuit against dozens of oil companies for funds to remediate the coast. Jindal fired Barry from his position and pushed a bill through the legislature, killing the lawsuit. A state judge recently ruled that the bill is unconstitutional; but Republican hostility to the lawsuit is likely to draw more political fire.

A challenge by industry to the lawsuit in federal court is pending.

Since covering the BP oil spill and following the disasters from industrial development in other deltaic regions, Marshall is a realist on the odds against enlightened policies. But in Baton Rouge to cover the debate in the legislature on the bill to kill the lawsuit, he became unusually glum.

“They had no interest in finding out what the suit was about or why it was necessary or help the state. I remember calling my wife, and saying, ‘Put the for sale sign up, we’re moving to Montana.’”

“They tried to draft twelve bills to kill the suit in different ways, and they could only get one bill to the floor,” says Marshall. “To me that’s the frustration – politics is a major cause of the damage. We’re sinking. If the computers are right we can build some of what we lost, and hold on to it – but we don’t have the money. The Republican-controlled Congress has refused to give us anything.”

The lawsuit is designed to get oil companies to the bargaining table and fund a budget to remediate coastal areas destroyed by their violations of state law. Public opinion polls favor the suit, but voters don’t provide the meat and whiskey (read: campaign funds) for democracy in Louisiana.

Five of the six Congressional representatives from Louisiana are Republicans.

After this month’s Republican electoral sweep, Mary Landrieu is  — for now — the state’s only Democrat in the Senate. She is in a runoff with Republican Congressman William Cassidy, a medical doctor, who said with no hint of irony on election night: “Louisiana has a senator with an ‘F’ from the NRA. We are the state that gave the world ‘Duck Dynasty.’”

With a Tea Party candidate who ran third in the state's open primary, pulling 11 percent of the vote, Landrieu faces steep odds on winning a fourth term.

Marshall sees Louisiana’s hard tilt to the right as another piece of the disaster pie.

John F. Kennedy was president and Marshall barely a teenager when he began making weekend trips from the city for fishing and hunting in the coastal wilderness.

Years later, he bought a small camp near the Gulf with three pals, 30 minutes by boat from the nearest launch, where they took their kids and friends for weekends.

“We had great hunting and fishing and duck hunting,” he says wistfully. “The place was in the marsh on stilts at Cane Bayou, an area of hundreds of square miles of wetlands, the great estuary of the Mississippi River. The Gulf was three miles south. The marshes were falling apart but it was good enough to hold feed for migratory water fowl, bass and speckled trout. It was one big living room with a kitchen, two sets of bunk beds, a screen porch, a little dock and a pier.”

The place had no electricity. It used a fresh water cistern for the bathroom shower and toilet.

“I forget which hurricane blew it over,” he says. “It’s just pilings now. The marsh out front became open water. This is in the Bird’s Foot delta, south of Venice [a fishing hamlet], at the main stem of the river. It’s still beautiful, the Amazon of North America, but it’ll be gone before the end of the century.”